In this third part of my virtual guitar amp roundup, I will be giving you my opinion and overview of IK Multimedia’s AmpliTube 4. This bundle is just part of the Italian software developers portfolio and has a come a long way in the last 10 years, but has it kept up with more recently released packages?

The AmpliTube virtual guitar amp software has been around now for many years and it is one that I have used personally for at least 10 years. It has some handy features, ‘Signature Artist’ sound pack add-ons and also includes a handy basic 8-track recording element to it as well.

You can get a free cut-down version via the IK Multimedia website or you can opt for one of the various versions of the paid edition starting from as low as EUR 149.99 ex VAT. IK even has an iOS and Android version of the software available as well.

Where it gets interesting is when you factor in IK’s Custom Shop software shop, that allows the owner to purchase separately various guitar rig elements such as virtual effects pedals, amp heads, cabinets and also bundles by brands such as Fender, Orange, MESA Boogie, Jet City, Marshall and Fulltone. Plus they also do those signature artist packs I mentioned earlier that include bundles based on Jimi Hendrix and Slash.

I’m going to just cover the standard 64-bit Mac version of the software in this article and give you my opinion on its ease of use and overall quality of sound. One of the benefits of AmpliTube is the ability to run it either standalone or as a plugin within your DAW, which for me is Logic Pro X.

Amplitube 4 has plenty to offer tonally and because you can buy extras as and when you need them it all becomes handy to use. I love that you can demo components before you buy them outright, as the Custom Shop element of AmpliTube 4 allows you to try them out for 72 hours without any hassle. So bonus points to IK for making it easy to try out new virtual elements in your guitar rig.

The sound quality of the software I have always found to be really good and easy to get to sit in a mix without too much fiddling around. It’s fairly logical and the package allows you to insert studio rack effects or individual pedals into your rigs with ease. The amp models themselves are pretty close to the originals they are based upon and I have found over the years that the cabinet models are all pretty decent as well. No, it hasn’t got the ability to insert your own Impulse Responses available yet, but there is a decent selection of quality cabinet/speaker models on hand. What is quite handy is the built-in microphone placement and virtual rooms, which kind of makes up for the lack of being able to make and use your own IRs. Overall, I have found it very flexible to use with a little bit of tweaking of basic presets.

This is tough as on the one hand, the pricing is very good. But I have sometimes found it frustrating to have to go and buy a specific virtual amp, cab or effect to make my specific patch. But, it is so flexible that I would have to say that actually, yes this package is good value for money overall.

You can always go out and buy AmpliTube MAX which includes everything for EUR 499.99 ex VAT which would solve the issue, but then you are spending a fair amount of money in one go. Ultimately, I like the fact that AmpliTube can grow with you and is expandable without having to break the bank.

My main gripe with Amplitube is the menu system, as to my eye, it looks dated. I think that visually it could do with an overhaul, and I find it really annoying to scroll through and find specific ‘branches’ quickly. I love the sounds it can create, though, and it is dead easy to build your virtual rigs.

I would love the Custom Shop element to be integrated straight into the main Amplitube package as well. Currently, it runs as a separate entity which is a ballache when you are in the middle of a workflow and want to add new sounds to your rig.

You can now buy plenty of great new add-on packages and so it would be nice to access them a bit quicker and more intuitively, so hopefully the next version will address this gripe of mine. Of course, IK makes plenty of great hardware and software, so you can easily integrate AmpliTube into most guitar setups, whether for studio work and recording or for live work, so it the ‘ease of use’ factor and variety of sounds fall on its plus side.

It will also be interesting to see how their new iRig Stomp I/O will be received by players when it releases later this month, I’m not that convinced it will be amazing, but I would like to be proved wrong. 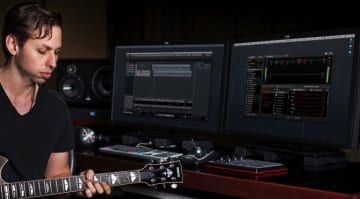 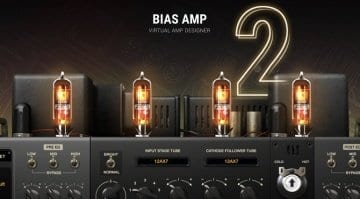 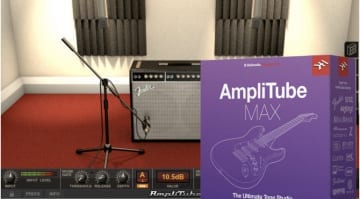 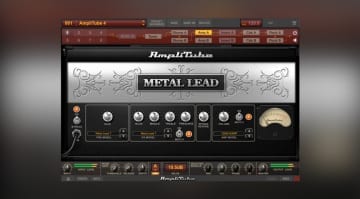 Amplitube is great! I’ve used the IOS standalone on my iPhone for a while now, and I love it.

On the MAC, however, my question is how do you get Amplitube 4 to load as a workable plugin to Logic Pro X? I can’t find solid instructions on this anywhere, and Logic Pro X is new to me.

How have you achieved this miracle?

It should just load on any audio track via the Audio Effects plugin drop-down menu in the mixer window on the left. So click on one of the slots and it will live in the AU menu at the bottom of the list under IK Multimedia. If you get super stuck email me via jef@gearnews.com and I will send you a screenshot and further instructions.

Thanks, Jef – I’ll try this again tonight and see how it goes…