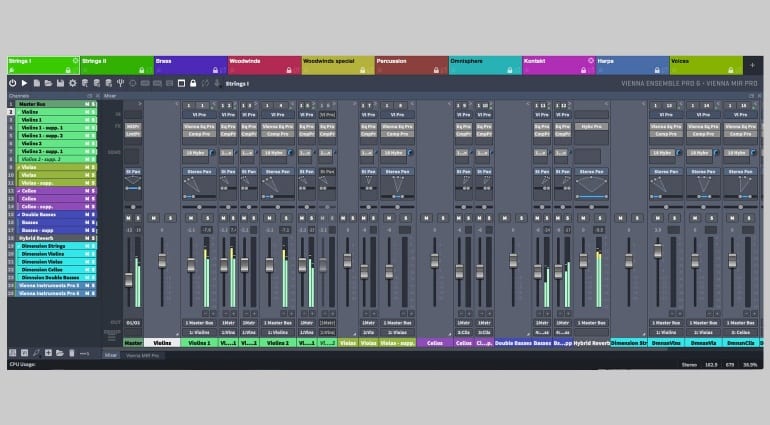 In 2009 Vienna Ensemble Pro provided the solution to running huge instrument libraries across multiple computers. There was none of the messing around you had with FX Teleport or VST Link, this was a definitive cross-platform network solution. Designed initially for their own Vienna Symphonic Library (VSL) it enabled producers to create full orchestra scores. And if you run out of resources, you just added another Mac or PC for instant headroom.

Along with the VSL, Vienna Ensemble Pro can also host other 32bit or 64bit VST/AU instruments such as Kontakt or Omnisphere. The MIDI and audio data all runs over a regular network and there’s no need for additional audio interfaces or proprietary connections. It really does break down the processing barriers and offers a scaled approach to music production, composing and virtual instruments.

Well firstly they’ve reworked the code in an effort to offer improved performance in terms of the graphical interface and the internal processing. They talk about a 70% and 80% improvement respectively which seems astonishing and certainly very welcome. In improving the graphics they also added high DPI support so that the interface doesn’t do the tiny shrink thing when running a retina or high density display.

On the organisational front they’ve worked all the running instances into a single tabbed “server” window which is probably the most asked-for feature. They’ve also thrown in some rather garish colour which clashes a bit with the usual sombre ‘pro’ grey. However, there’s a good reason for this in that the colours represent an instance of Vienna which will also be shown on the plug-in in the DAW. This makes it far easier to see which plug-in is attached to which instance, playing which instrument – nice! Clicking on the plug-in also brings the attached instance to the front of the server. You can now group and folderise channels. They appear to have worked hard on the whole workflow in what had become a bit of an unwieldy interface. Looks like they cracked it.

You can now load VST plug-ins on the Mac version which makes the multi-platform approach far more unified and fully compatible with Windows. Disabling channels will now freeze and unload all the plug-ins on that channel while keeping the data intact. The MIR Pro impulse reverb plug-in has been tweaked to offer far better performance especially on the Mac.

There are many more improvements and tweaks to both the plug-in and the server window.

Vienna Ensemble Pro is undoubtedly the best at what it does. This version appears to address the concerns of many users as the numbers of computers on the network grows. The organisation of instances and keeping track of everything is vital for a low stress workflow. The unification across OSX and Windows is also going to be of great relief to many. Good work.

For a full list of new features and a comparison to older versions please visit the website here.

Vienna Ensemble Pro 6 is available now for a special price of €235 until the end of August. It comes with 3 licenses for setting up a multi-computer network.