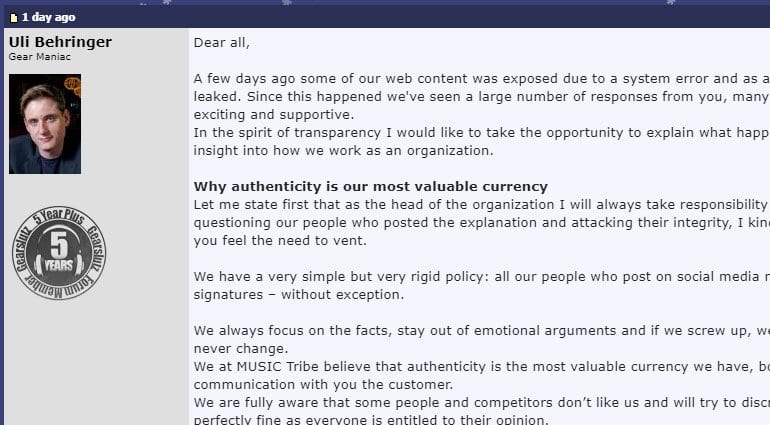 Behringer had a bit of a problem this week with a wayward server publishing detail of all the synth and drum machine clones they’ve ever dreamed of. They quickly closed it down and told us that it’s all just conceptual stuff and shouldn’t be taken seriously. Regardless, the internet and the forums went bonkers discussing the pros and cons of Behringers various promises of classic synthesizers at silly prices.

It’s rarely a pretty thing because Behringer are so divisive. On the one hand, some people say they just make crappy plastic rubbish, but on the other many people say their stuff is great and it’s giving people on small budgets the chance to play with synthesizer technology otherwise reserved for the wealthy elite. It’s not an argument that’s going to be solved anytime soon. But Uli Behringer (to his rarely acknowledged credit) is very protective of his company and his workers. He takes full responsibility for the server trouble and the fall out that resulted. In order to set the record straight and to try to inject some sanity into the discussion, he issued a thoughtful and enlightening statement on Gearslutz.

You can read it in full here.

The gist of it is that they believe authenticity is their most valuable currency. They have 4000 people working in 16 countries maintaining thousands of existing products while developing 500 new ones. They use a web-based system to tie all production and development together. Various people in various roles flesh out products in the concept stage. That may be features, renders, desired delivery dates and so on. A product has to go through many milestones before becoming a reality and nothing is ever published until it’s about ready to go. Unfortunately, a piece of code got deleted that usually prevents publication and we got treated to a bunch of products that are not out of the concept stage yet.

He’s sorry about the mess. It’s very embarrassing but hopes that many of these will make it to reality at some point. He goes on to say that the reason for the delay on the Model D is because of a huge factory move that’s taking longer than expected. They hope to have a few out before the end of the year, the rest in Q1 of 2018.

Later in the thread, Uli says the following in response to a post in support of his comments about what Behringer are doing (particularly the poster’s dream of owning an ARP 2600): “Once we have the first 2600 synths coming off the production line, I’ll send you one as a free gift”. Now that’s one way of getting everyone to say nice things! But cynicism aside, that’s a fabulous gesture.

I think I’m starting to warm to this Behringer guy. He comes across as a human being who is frustrated by the misrepresentation. But also wise enough to know when and when not to engage with the enthusiasts. I think the DeepMind shows us that he can build an interesting synthesizer for a great price. I’m looking forward to what comes next.

How does this ring with design properties?

It makes me believe we’re dealing with copyright expiration dates and public domains but is that really so and how does Behringer keep lawyers at bay?