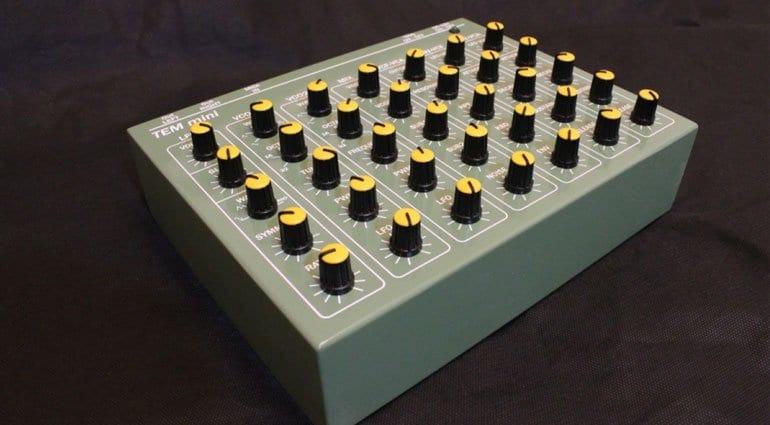 Just because Behringer is releasing all the clones for silly money it doesn’t mean other people shouldn’t have a go. Czech developer Jan Zatloukal of ADSR.cz has announced the release of TEM Mini, an analogue monosynth inspired by the legendary Moog Minimoog.

It’s a fully analogue synthesizer with 2 oscillators, subs, low-pass and high-pass filters, LFO and 2 ADSR envelopes. There’s a mixer section that also mixes in some pink noise. The oscillators have 5 waveforms and a range of 5 octaves, the filter is a classic Moog ladder filter and the LFO has 4 waveform options. One envelope is dedicated to the VCA, the other to the filter.

With a MIDI input and a stereo output, it’s a straightforward analogue monosynth. One interesting addition is the option of a memory section. You can store up to 100 presets if you so wish. Sadly there’s no CV connections or anything that would give it some modular integration.

The question that remains is whether this or any other Minimoog inspired analogue synthesizer can stand up to the might of the Behringer Model D at £299. They are expecting to charge €635 for the TEM or €830 with the memory and that’s about right for a small run, boutique synth. But how can that hope to compete with the Behringer?

Maybe it’s all about personality. What I did enjoy is the Google Translate of the Czech webpage which kicks off with this tagline:

We got a new, made in the Czech Republic, TEM mini synthesizer. Inspired by the legendary Minimooge, built as a tank, priced for everyone. I looked at his tooth and I must say he really did.