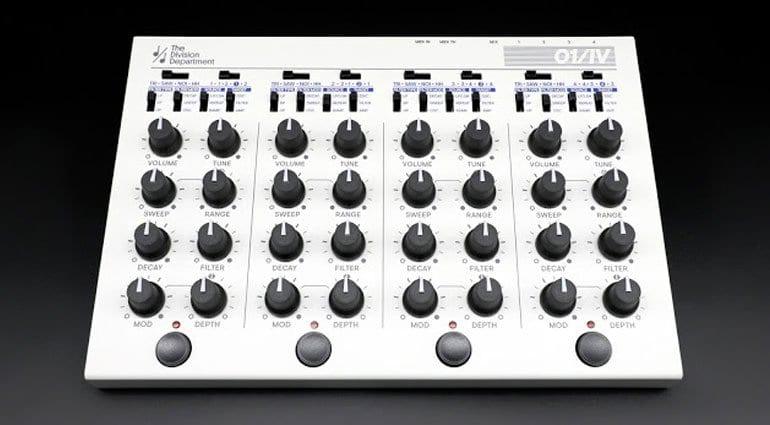 We’ve seen snippets and clips of The Division Department’s forthcoming o1/IV drum machine but now they’ve released the full details so that we can better talk about it.

So, is it “zero-one-eye-vee” or “oh-one-four”? Who knows, but as this is a 4-channel analogue drum synthesizer then I’m going to go with the latter. The 01/IV has 4 identical drum channels with the power to synthesise all sorts of percussive noises. So any channel can be a kick, snare, hat, zip, flap, wonk, tonk, tom, or even a bass line. You can layer the channels up or feed them into each other for some FM action and complex sounds.

Along with the analogue signal path there’s a very flexible digital modulation system with a multifunction LFO, ramp and retrigger generator. Altogether there are 60 controls on the front panel including a trigger button for each channel.

Each channel has level and tuning, a multimode filter, decay control and modulation. A series of switches at the top provides choices of modulation and destinations. You can also select the waveform from triangle, sawtooth, white noise and hi-hat noise (i guess a particular sort of noise best suited to hi-hats).

On the back you get individual outputs for the channels plus a mix output and MIDI in/thru.

What’s interesting about the 01/IV is the width of the sonic palette. From drones to bass lines, to noises, to traditional sounds there’s a lot of depth and possibility. The routing of one channel into another lends it a whole other range of exploration.

What I don’t quite understand is the lack of a sequencer. This isn’t a drum machine, it’s an analogue drum sound source. So then you think perhaps I can run it from my modular – sadly not, there’s no CV, only MIDI. So you’re going to have to take your laptop with you although maybe not again as it doesn’t have USB either. It leaves me thinking that I have this great box of noises that I’m not sure how to access. I guess I’ll have to get a BeatStep Pro hardware MIDI sequencer or a MIDI interface for my laptop.

Anyway, connectivity reservations aside hopefully seeing it in action at Superbooth will make their thinking a bit clearer. 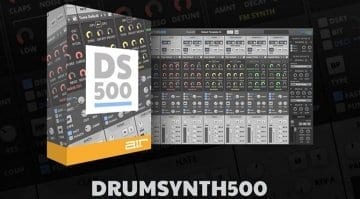