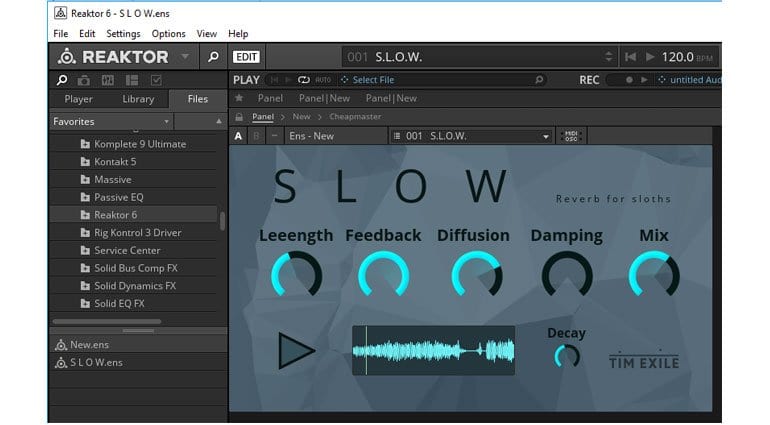 He makes such interesting stuff. All of his creations for Native Instruments like Flesh and Finger resonate with me. It’s like he’s a younger, fresher, more creative and exciting version of me who has actually done something with his life. Anyway, his latest invention is called SLOW and he describes it as a “super-slow reverb for sloths”. Let’s have a look.

You will need Reaktor 6 to run it as SLOW is a Reaktor ensemble. It’s completely free, you just need to sign up to the newsletter here. There are five main controls; length, Feedback, Diffusion, Damping and Mix. At the bottom is a sample that you can trigger with the big Play button and Decay control over it. Hit the Play button and you get a “bing” with an awesomely cavernous reflection. There’s 8 presets covering both long and short reverbs and some delays. The way the reverb decays is so very lovely.

Tim describes it as follows:

“S L O W behaves in weird ways because it uses more delay lines which are longer than a standard reverb. It originally came to life as one part of the IBM #RemixIT project where I sonified various uses of IBM’s technology. S L O W represents the journey from a single data point to a global pattern of masses of concurrent data. By slowing down the reverb algorithm you can hear the individual reflections as they build up from individual sonic events to a wash of millions of events with a collective sonic imprint. Put your knitwear on, plug your mic in and drench this evening in a sea of drones.”

I had almost given up trying to get sound through this thing. It just wouldn’t work – sound going in, nothing coming out. My only option seemed to be to trigger that sample. However, you can drag and drop any sample you like into that space, which is nice. I was about to give up and post this article saying that I couldn’t get it to work when I noticed that tiny slider below the audio input in Reaktor was set to zero – aha! Oh my GOD – that’s immense! I Picked up my guitar and now I’m drifting off into some kind of other worldly place of mesmeric paradise. That’s amazing – I’m so glad I persevered!

There’s no information about on the Time Exile website but I’m sure it will be along in time. 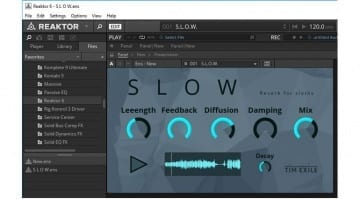