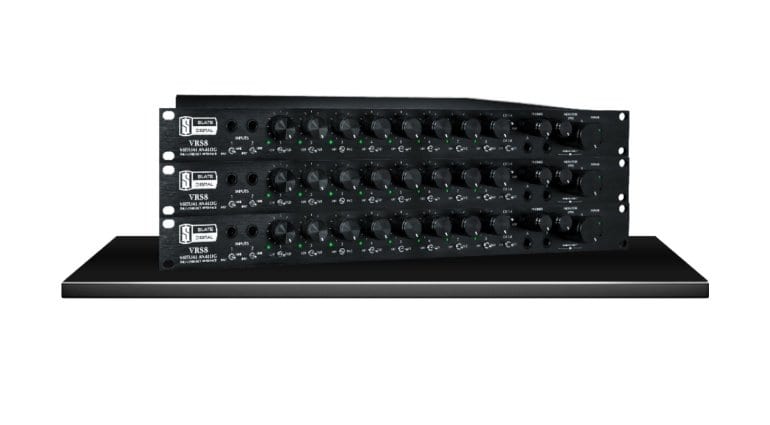 Spending over an year in “announced but not released” hell, the Slate Digital VRS8 audio interface is finally available for purchase. As we have been aware for a long time now, the VRS8 is equipped with eight linear VMS-One mic preamps which can be used with Slate microphones (or any other mics, though results may vary) to emulate various mic classics.

Slate calls the VRS8 “low latency native” for its custom chipset enables a roundtrip latency of only 0.7ms, the industry’s lowest figure by far. The figure is supposedly achieved at 96kHz with a 32 sample buffer size, which sounds excellent and also a bit too good to be true… User feedback will eventually prove Slate right or wrong.

There are eight analog outputs as well as MIDI and Wordclock ports. Slate has included neither ADAT nor S/PDIF, which is apparently the price you pay for that wicked 0.7ms latency. Slate explains that implementing digital inputs would have increased the latency significantly.

Another compromise which you will have to deal with for the time being is that the interface is Thunderbolt only, and only compatible with Macs at the moment. A Windows thunderbolt driver is currently in beta testing, and its release will be followed by a legacy Mac driver for PCIe.

Finally, the price: EUR 2099. Very competitive for an interface like this! The VRS8 is available now at Slate dealers, such as Thomann.