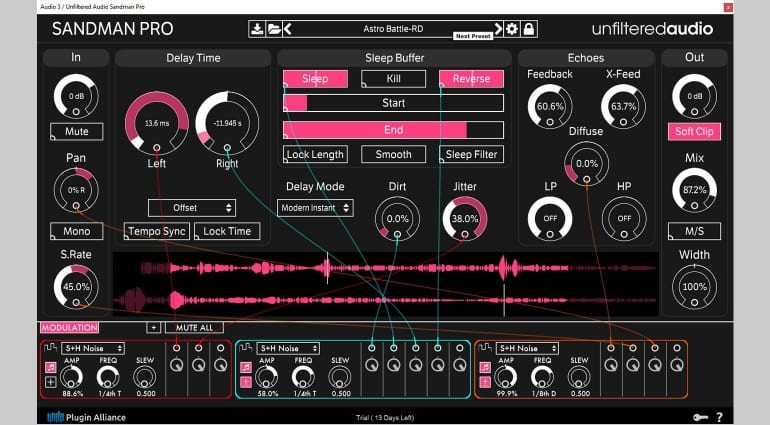 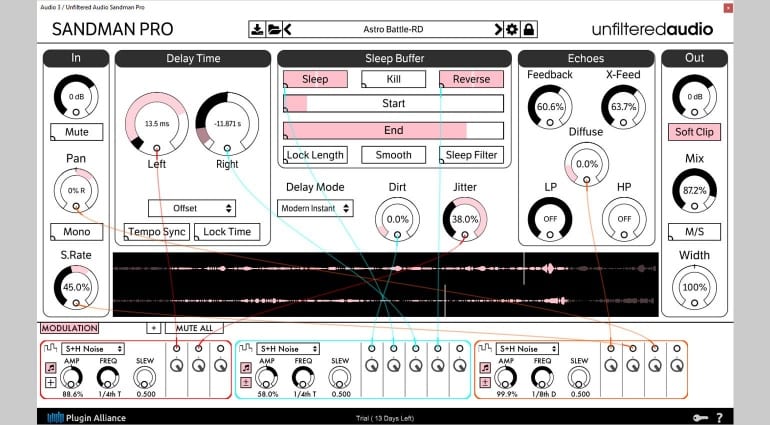 Unfiltered Audio have released a major upgrade to their Sandman delay plug-in. Taking on the look of the recent Dent and Indent plug-ins, Sandman Pro widens the versatility by introducing 7 new delay modes and masses of modulation.

On reflection, dreamy might not be very apt because Unfiltered Audio’s plug-ins often have a certain edge to them. They give an impression of attack, of intensity and aggression that perhaps is hidden behind the name of Sandman Pro. But once you get the pink and black GUI up and running you know this is less of a dream and more of a nightmare in all the deliciously right ways.

The delay modes cover Classic Tape, Modern Instant, Pitch Shifter, Glitch Shifter, Multi-tap, Reverse and No Echo. These modes move it from being all about delay into other modulations such as flanging and chorusing, or about pitching shifting and harmonising. There’s glitchiness and granular synthesis, resonators and reverb all oozing out of this one plug-in.

Two features carried over from the original are Sleep and Kill. These are to do with manipulating the delay buffer. The Sleep function freezes the audio in the buffer and gives control over start and end points. This can generate some really interesting glitchiness. The Kill button empties the delay buffer, immediately removing the delay content. Useful as both a kill switch and a halting effect. Both these functions are now modulatable and so you can turn them on and off in some very interesting ways.

And it’s the modulation engine that really brings the spice to Sandman Pro. Like we’ve seen in Indent the bottom of the plug-in is devoted to LFO modules that can be patched in to any other parameter. you can load up to 6 modules and they also include an input follower and a sample-and-hold noise generator. You can keep on adding outputs to an LFO to your hearts content. Have a single LFO controlling everything if you wish. Dragging the little patch cables around is a really simple and engaging way to do the routing. Far easier, in my opinion, than all these modulation matrix things we see a lot of these days. The GUI also animates beautifully so you can see what’s being modulated and by how much.

Clicking through the presets, there’s a lot of esoteric stuff from famous people that doesn’t feel immediately usable. However, the interface begs you to move out on your own and before you know it you’ve created something weird and wonderful. The interface is wonderfully harsh and can also be blown up to twice the size. There’s also an option to switch to a white interface – which is just as nasty but in a more innocent way. The video below doesn’t really do it justice – I found it really hard to work out what the effect was doing. It’s far better to download the 14-day demo and try it out for yourself. 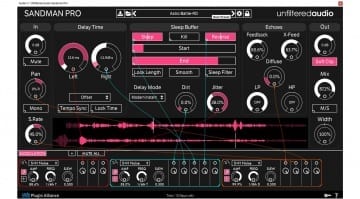