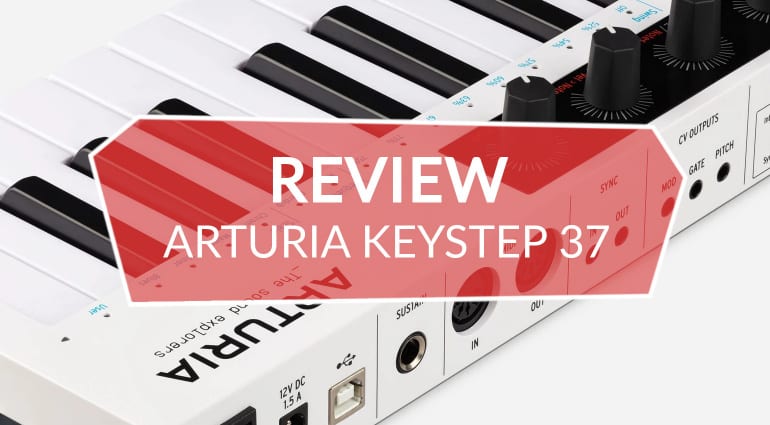 More keys, more arpeggios, a display, polyphonic sequencing, an expanded Chord mode, MIDI controls and a bunch of tweaks could put the KeyStep 37 in a prime position for both modular and MIDI control. Here’s our review.

The original KeyStep was a great little keyboard that brought extraordinarily useful CV/Gate and Modulation outputs to a little MIDI controller keyboard. It was an instant hit as it enabled a quick and easy way to drive your modular system from a place of familiarity. It was, perhaps, a little bit too simplistic. The KeyStep Pro with its larger keyboard, 4 channels of polyphonic step-sequencing, drum machine programming and layers of voltage is a superb MIDI and modular sequencer and controller but is perhaps a little overwhelming for people with a smaller collection of Eurorack. There’s definitely room for something in between and the KeyStep 37 aims to fill that space.

The first thing you notice is how remarkably heavy it is. This thing is solid, with a metal base-plate and a sturdy feel. It’s in Arturia’s favourite shade of white which doesn’t particularly appeal to me but maybe a black version will be along in time. The rubberised knobs are good and wobble-free and the whole thing gives you the impression that it’s well built and is going to last on stage as well as in the studio. 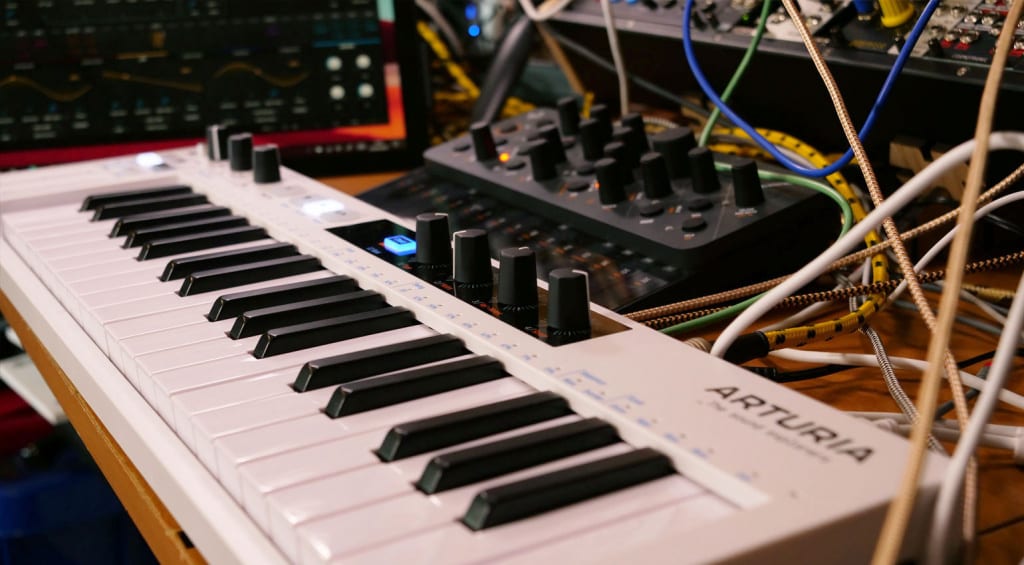 It doesn’t come with a power supply but there is a socket for one but otherwise, it’s powered over USB. They’ve changed the MicroUSB socket from the KeyStep to the regular Type-B socket and have marked this out as a feature so presumably it’s more reliable or robust.

For other connections there are Pitch, Gate and Modulation CV outputs for running your modular or analogue controlled synthesizer, Sync In/Out, a Sustain pedal input and good old fashioned MIDI In/Out ports. After being briefly impressed by TRS MIDI connections running on mini-jack I find it more trouble than it’s worth with the conflicting Type-A and Type-B formats and so regular MIDI ports are a welcome sight. The other welcome sight is the power switch so you can turn it off; which seems like an odd thing to say but so many USB powered controllers don’t have a power switch so they glow brightly all night long unless you pull the cable out. 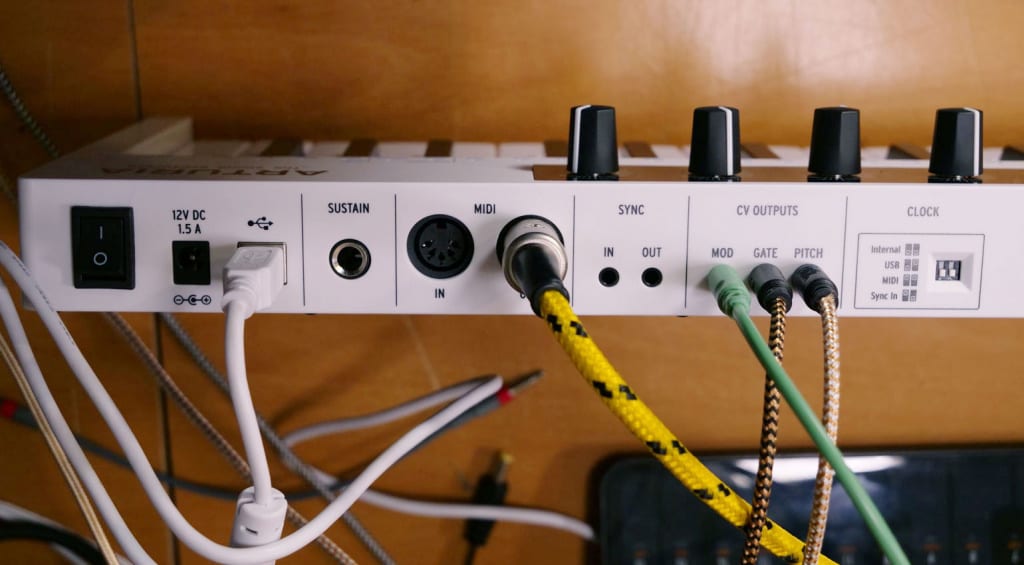 The Chord mode in the original KeyStep was a very basic ability to memorise a chord and play it on a single key. With the KeyStep 37 it’s become a bit of a feature and has brought along 4 new knobs and a display. The idea of Chord mode is to take a single note and build a chord from it. You now have 11 chord types built-in plus a user chord so you can still use the original chord-memorise function. The chords on offer are Octaves, 5th, Suspended, Minor and Major with 7th, 9th and 11th and are selected on the first knob. The slightly quizzical display gives you an indication of what’s selected. The Notes knob then sets the number of notes within the chord going from 2 notes or a regular triad right up to 16 notes as if you were playing with two sets of hands. It’s quite interesting to dial those notes in as you play and they go spanning up the keyboard. 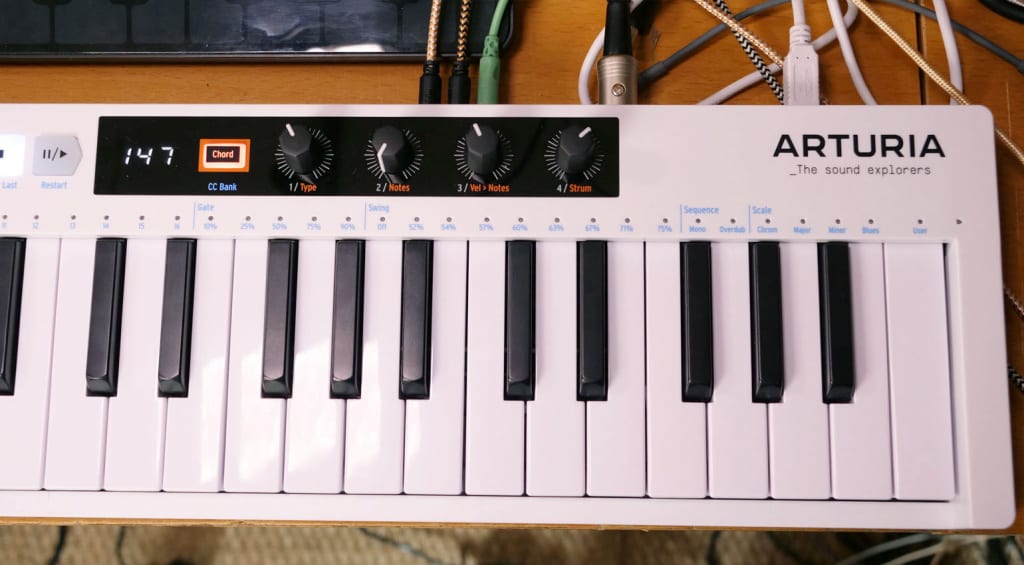 The next knob is labelled Vel>Notes which had me puzzled for a while but this works with the Notes knob by bringing velocity to bear on how many notes will sound. So, the harder you hit the key the more notes will sound up to the number set on the Notes knob. Set to 99% only the root note will sound at low velocity and more notes get added the harder you hit the keys. That’s quite an unexpectedly interesting and playful function.

Last but not least is the Strum knob. This introduces a strumming effect on the chord. You can set the speed from almost instantaneous through to tempo-synced laid back divisions. This looked like it could be a useful function for modular and monophonic synthesizers where the Chord mode is otherwise completely useless but sadly it doesn’t play the strummed notes individually out of the CV outputs which is a shame.

Through the use of the Shift key these 4 knobs become 4 banks of 4 MIDI CC number controls for mapping to any MIDI synth – handy!

Arpeggiators tend to be useful tools that are rarely creatively inspiring. Well, the KeyStep 37 has something to say about that. Along with the usual up/down/sideways sorts of modes Arturia has brought in two new ones that are actually rather good. “Walk” is a mode based on probability where 50% of the time it moves to the next note, 25% of the time it repeats the current one and for the other 25% it walks backwards. It starts to generate some really interesting variations around the notes you’re holding.

The other mode is “Pattern” which creates a fresh random pattern each time you hold some notes. Rather than constant randomisation it then repeats the notes as a looping sequence. It’s remarkably good at generating basslines, melodies and interesting sequences with almost zero effort from you. I would often use an arpeggiator purely to give my synth something play while I fiddle with the sound whereas now the Pattern mode offers up a far more interesting series of notes that immediately get your creative juices flowing.

One other nice feature is that you can pause an arpeggio and set it going again with the Play/Pause button without having to replay the notes. 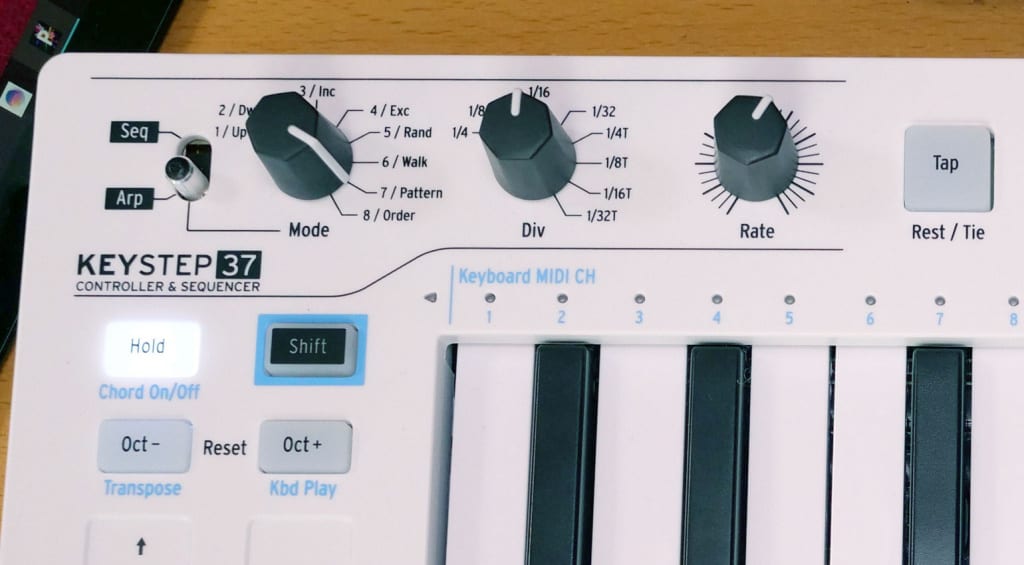 It only has a single sequencer track, which is where the KeyStep Pro is far more fully-featured, but it is 8-note polyphonic and can go up to 64 steps. Unlike the Pro there’s no metronome and so if you want to record a live sequence you’ll going to need to find something to play along to. But really this is all about step-sequencing. Hit Record, play your notes, hit Play and there’s your sequence pulled into time and looping perfectly. It’s brilliantly simple and that’s not all. Using the Tap Tempo button you can introduce rests or ties during the step-record. It’s great, I love the simplicity especially with modular where sequencing can often be an exercise in constant knob-twiddling.

For polyphony you can just play more notes at the same time or you can overdub them on afterwards. You can’t actually edit individual notes but while the sequencer is still in record mode you can add notes over the top. In mono mode these will replace any notes that occur on the same step or in poly mode they will be added to the sequence. This way you can layer up all sorts of melody, chords and variations while evolving a sequence into different places. I found that in poly mode a monophonic instrument such as a modular will play the lowest notes in a polyphonic stack so you can keep that playing a bassline while adding further notes onto a polyphonic MIDI synth. I should point out that the KeyStep 37 can run CV/Gate, MIDI and USB MIDI simultaneously and it’s enormous fun to do so.

You can transpose sequences with a single note press but you can also turn on a Keyboard Play mode which lets you play alongside the sequence without affecting it. This is great for polyphonic synths but also with a monosynth it will continue to play the sequence as soon as you release the key. There’s also a function where you can change the MIDI channel for the part you’re playing so you can address a completely different sound if you wanted.

In Sequencer mode the Arpeggiator mode knob becomes the storage destination for 8 sequences. You can then switch between them on the fly. If you hold the Shift key while turning the knob you can skip past other sequences without them triggering and then release Shift once you’ve dialled in the one you want. The same is true of the Time Division knob which is also very useful.

You can rearrange, save and load sequences using the MIDI Control Centre application on your computer as well as configure other aspects of the KeyStep 37. So you could have a gigs worth of patterns loaded up ready to go.

The KeyStep 37 is an impressively balanced MIDI and modular controller. It has just enough features and versatility to raise your eyebrows without furrowing your brow with complexity. The keyboard is small, slimline and not at all fabulous to play but it’s reasonable enough for knocking out tunes and working with arpeggiations and sequences. The extra note range is welcome and it is velocity-sensitive and does have a little bit of aftertouch in there somewhere. The display is great, giving you the tempo and values of the knobs and the LEDs above the keys are definitely useful. I’m finding both the arpeggiator and the sequencer a load of fun to play with especially when I have all three destinations wired up and working together. I can see how it’s a much simpler device to take to a gig with you than the KeyStep Pro and has just enough to make for a useful set although you might want to pair it with a drum machine. 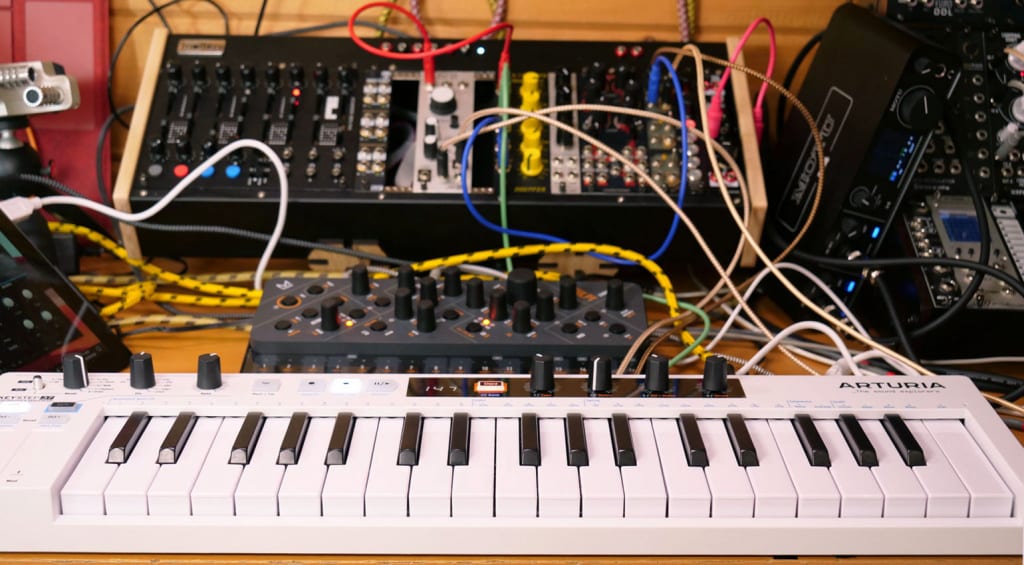 Perhaps the only disappointment for me is that there’s no real evolution of the CV side from the original. It benefits from the better arpeggiator and sequencer functions but there’s nothing like CV modulation recording. The modulation strip sends CV out of the analogue Mod output and it would great if those movements could be recorded into the sequencer. Or perhaps they could have added another CV output with a knob or something like alternative gate patterns – just a nudge to take the CV side to another level.

So what you get is a number of small but decent upgrades to the KeyStep which was already a great product that makes the KeyStep 37 a really solid, fun and useful product for anyone working with a modest amount of MIDI and modular.

9 responses to “Review: Is the Arturia KeyStep 37 the perfect MIDI and Modular controller?”