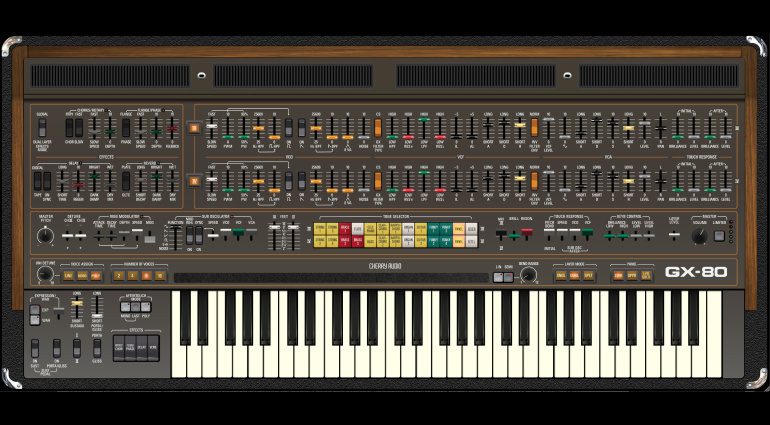 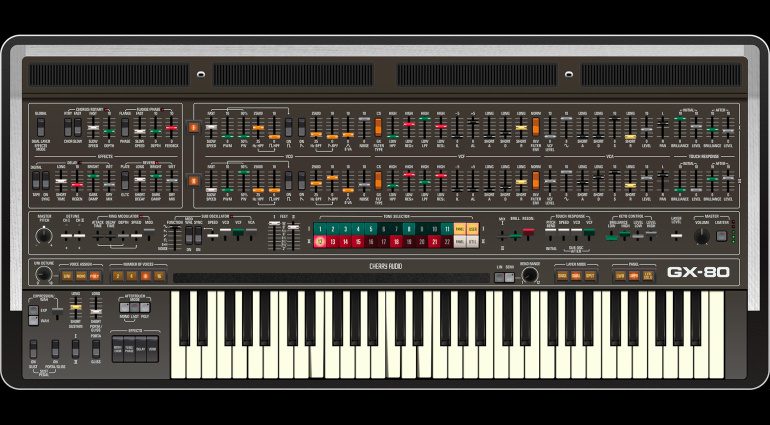 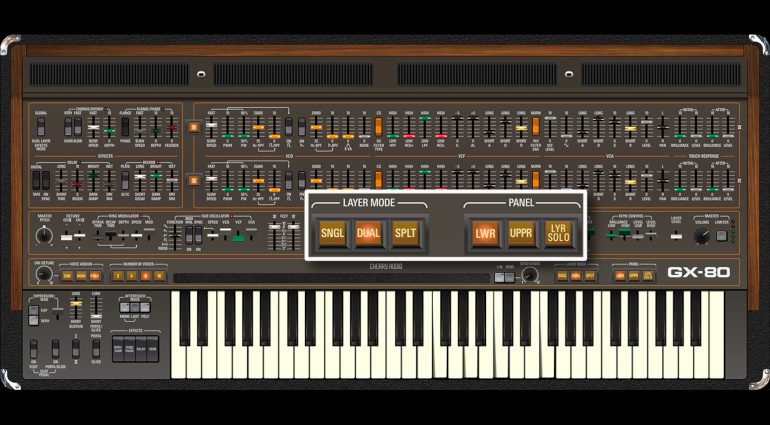 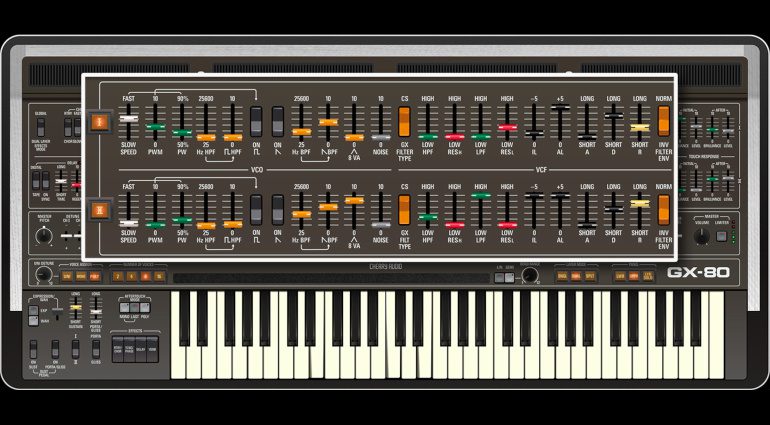 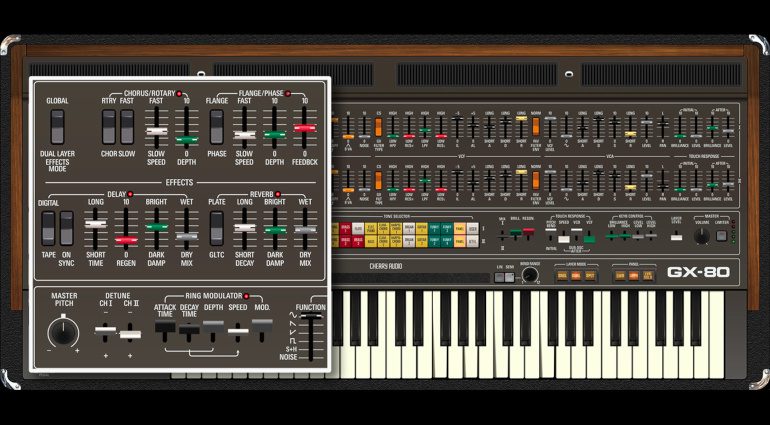 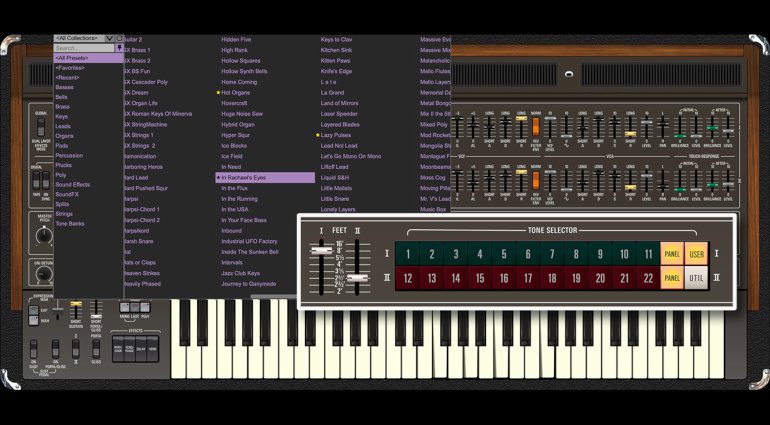 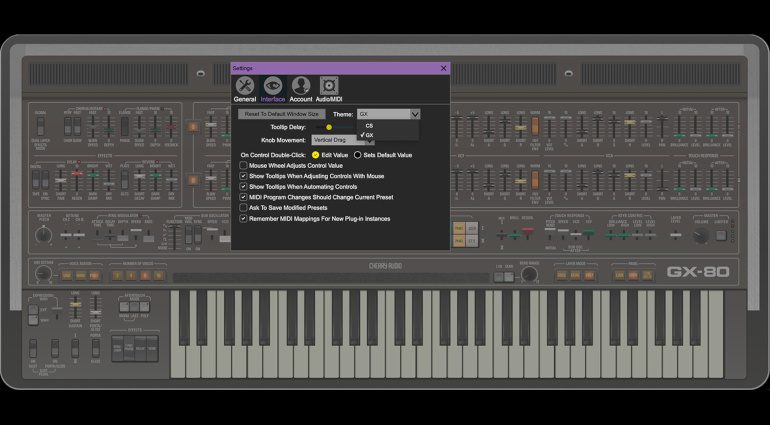 After a teaser video that left few in any doubt that Cherry Audio were working on a CS-80 emulation, they have surprised many by announcing GX-80. Not only does this emulate a CS-80, but it also factors in another Yamaha behemoth, the famous GX-1.

Does The World Need Another CS-80 Emulation?

Well, let’s be honest, there aren’t many, are there? The CS-80 has gained almost mythical status and enjoys that rare appreciation as a pinnacle in analog synthesis achievements. Made culturally famous by Vangelis and his use of it across a number of his works, the CS-80 has popped up in some surprising places. Did you know that the opening riff of Springsteen’s ‘Born In The USA’ was a CS-80?

Ignoring all calls for a hardware reissue, Yamaha have never truly cashed in on the CS-80’s popularity. Arturia were one of the first to have a stab at it with their CS-80 V. Their first version came in for a lot of stick as not getting close to the real thing. Over the years, subsequent iterations have gotten much closer. V4 has even the die hard hardware experts cupping an ear to try and tell it apart from the original.

Behringer have long teased one of their hardware “clones” but that has never seen the light of day. So maybe we do need another emulation? And with Cherry Audio’s GX-80, we’re getting a lot more into the deal.

Dan Goldstein, head honcho at Cherry Audio, tells me they have been working on this instrument for over a year. They have meticulously studied both instruments to deliver, what they feel is, a perfect blend of late 70s Yamaha awesomeness. In order to do this, the GX-80 team studied two CS-80 hardware units as well as the detailed schematics and manuals. Due to the scarcity of the GX-1 their research was limited to the schematics and service manuals of the original triple manual Electone organ.

All the unique voice features of the Yamaha GX-1 organ that were cut out when Yamaha created the CS-80 are included. This means that GX-80 includes the GX-1’s high-pass filtered square wave, band-pass filtered sawtooth wave, triangle wave one octave higher than the other waveforms, the ability to invert the filter envelope. They’ve even included the unique and characterful GX-1 filter.

GX-80 then allows you to layer two complete CS-80 voices and their effects together, or split them across the keyboard. Each rank can be independently panned in stereo for truly HUGE sounds!

Whilst the  GX-80 plays like a nicely-calibrated CS-80, there are minute pitch and timing variations throughout the synth for an extremely realistic analog feel. 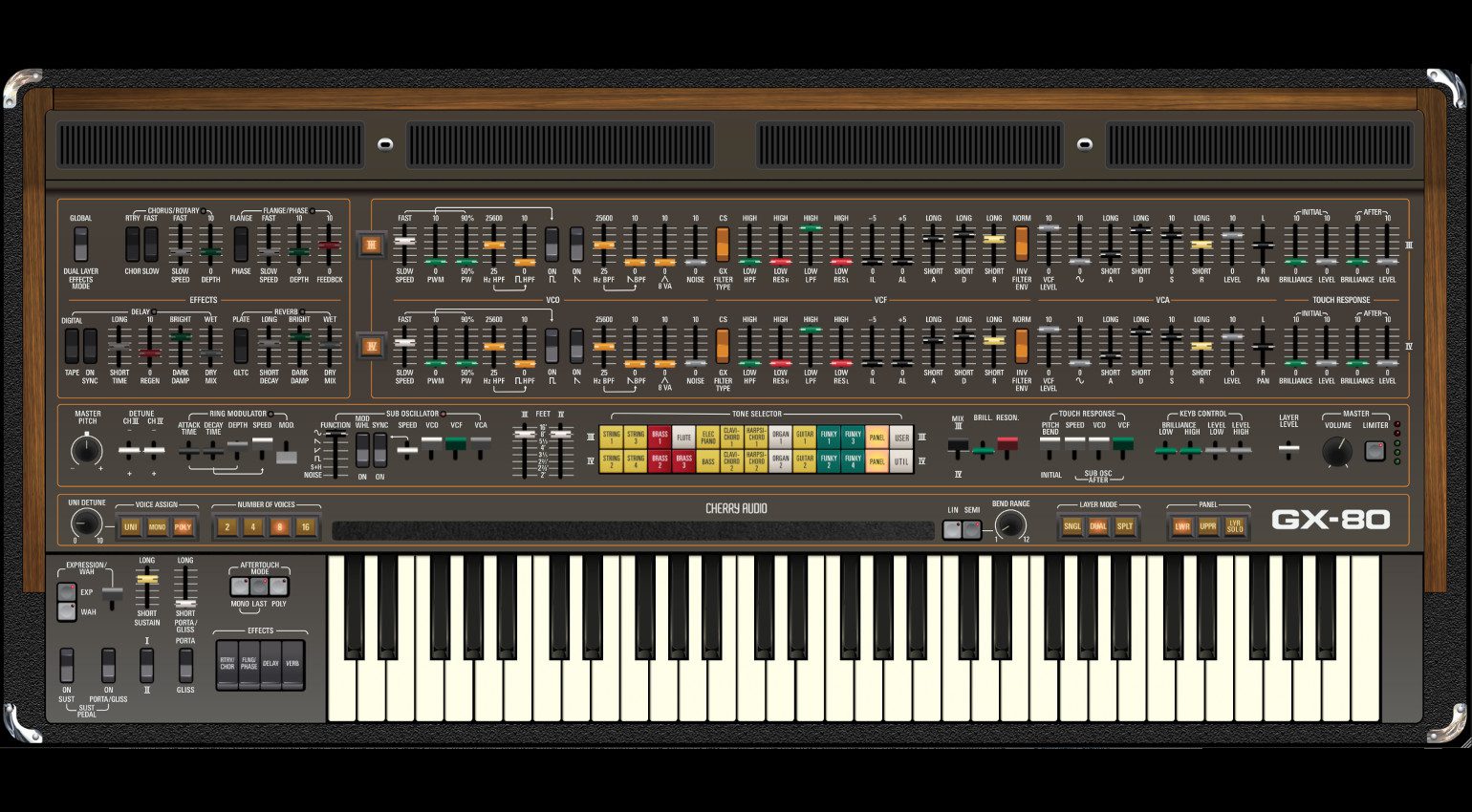 When fired up, Cherry Audio’s GX-80 is unmistakably based on the UI of the CS-80 but as you’d expect, displays a bunch of new and improved features. For starters, there is a powerful and comprehensive effects section. Located where the CS-80’s primitive patch memory section resided, these can be assigned globally or per layer. They include modulation effects such as Chorus, Rotary, Flanger and Phaser. The Delay has Digital and Tape options and the Reverb includes the algorithm from their excellent Galactic Reverb plugin.

It very much feels like Cherry Audio have thought about the effects available at the time that the original synths were available. They have delivered a suite of effects that were commonly used to beef up, what was a fairly weedy sound. Anyone that has actually played a CS-80 will know that feeling of deflation when playing it sans effects!

Much of the UI is identical to an original CS-80. Even the famous levers work in that odd, opposite direction where down is more and up is less! Many a time that has caught me out! The classic candy button Tone Selector section is present, albeit slightly tweaked as patch memory buttons are a moot point on a 21st century plugin. 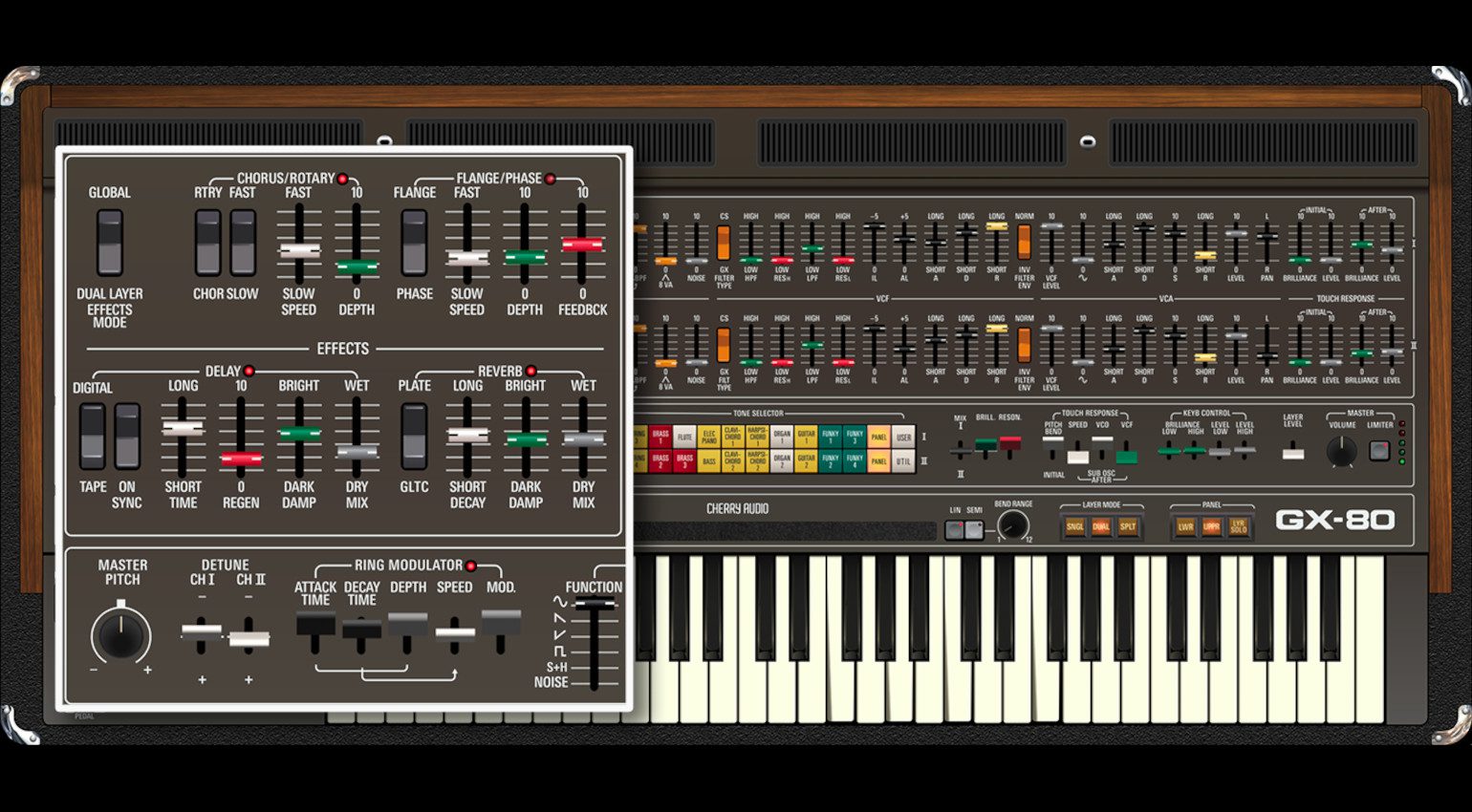 The original CS-80 has two voice sections, known as Ranks. The GX-80’s Ranks are somewhat more detailed than the hardware as they include a lot of the GX-1 features mentioned earlier. Each rank can select between the CS-80 filter and the GX-1 filter and whether to employ the GX-1’s filter inversion. Rank settings can easily be swapped from Position I to II and vice versa.

However, the GX-1 had four ranks and so, to access these, you use the upper and lower panel buttons. A Layer Level Lever (try saying that quickly!) allows you to balance between the two.

The section below the ranks closely resembles that of a CS-80 but expands on things a little with two detune levers and expanded ‘footage’ to accommodate GX-1 settings. The performance section to the left of the keyboard also expands the originals slightly but is essentially the same.

Anyone with intimate knowledge of the CS-80 will feel right at home here. 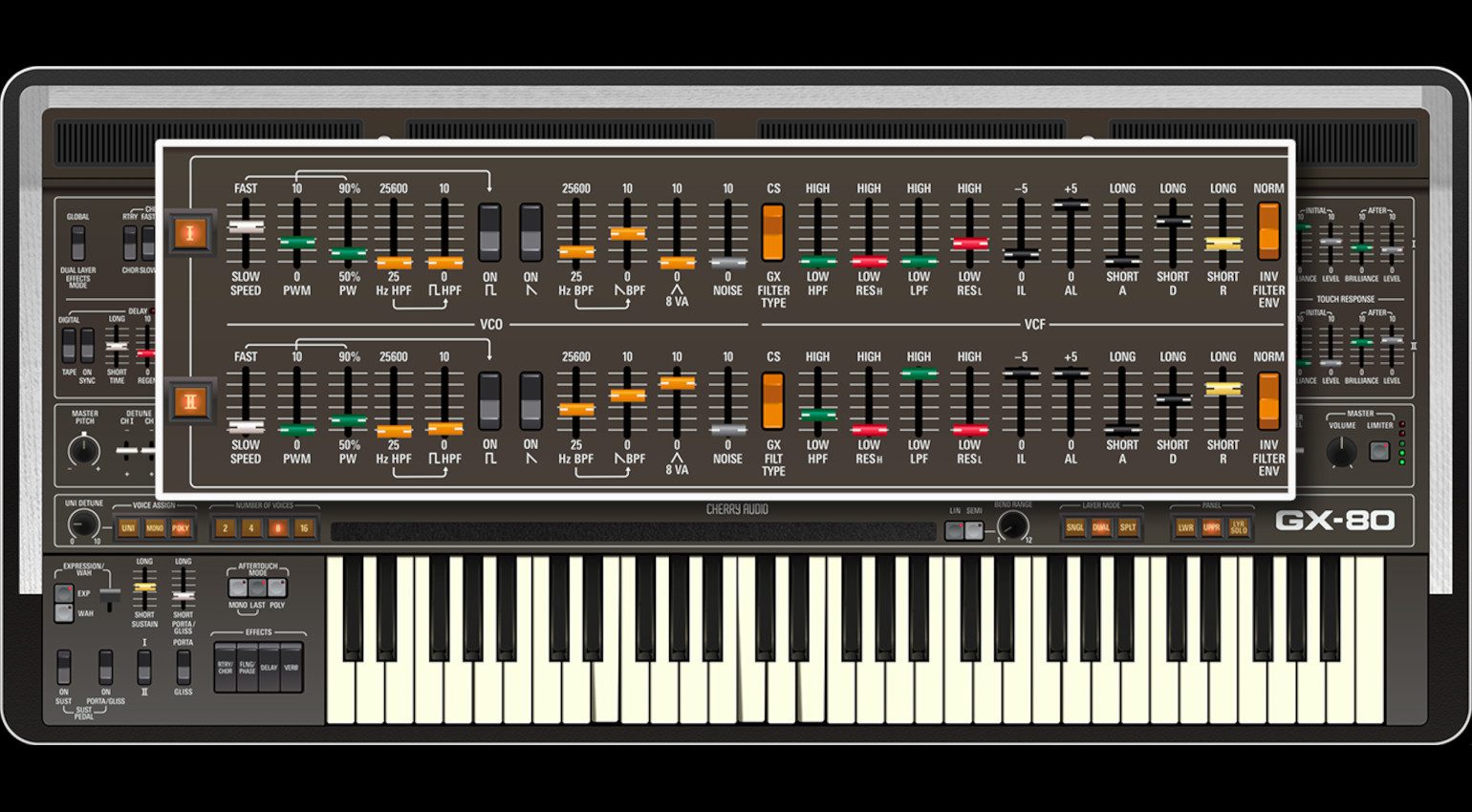 Patches can be single, dual or split and GX-80 allows for full polyphonic aftertouch, should your MIDI controller transmit it. If it doesn’t, there is last note aftertouch which, as you might guess, applies the aftertouch effect to the last note played. This feature delivers a happy medium for those not blessed with a Hydrasynth! The Ribbon Strip is included and is assigned to the pitch bend function.

One important feature is the layer mode. This is required due to the GX-80’s duality of origin. The CS-80 had two voice ranks, essentially two separate, 8 note polyphonic synth engines. The GX-1 had four! So, to facilitate this, the layer mode has three options:

Splits have the option to be user defined. 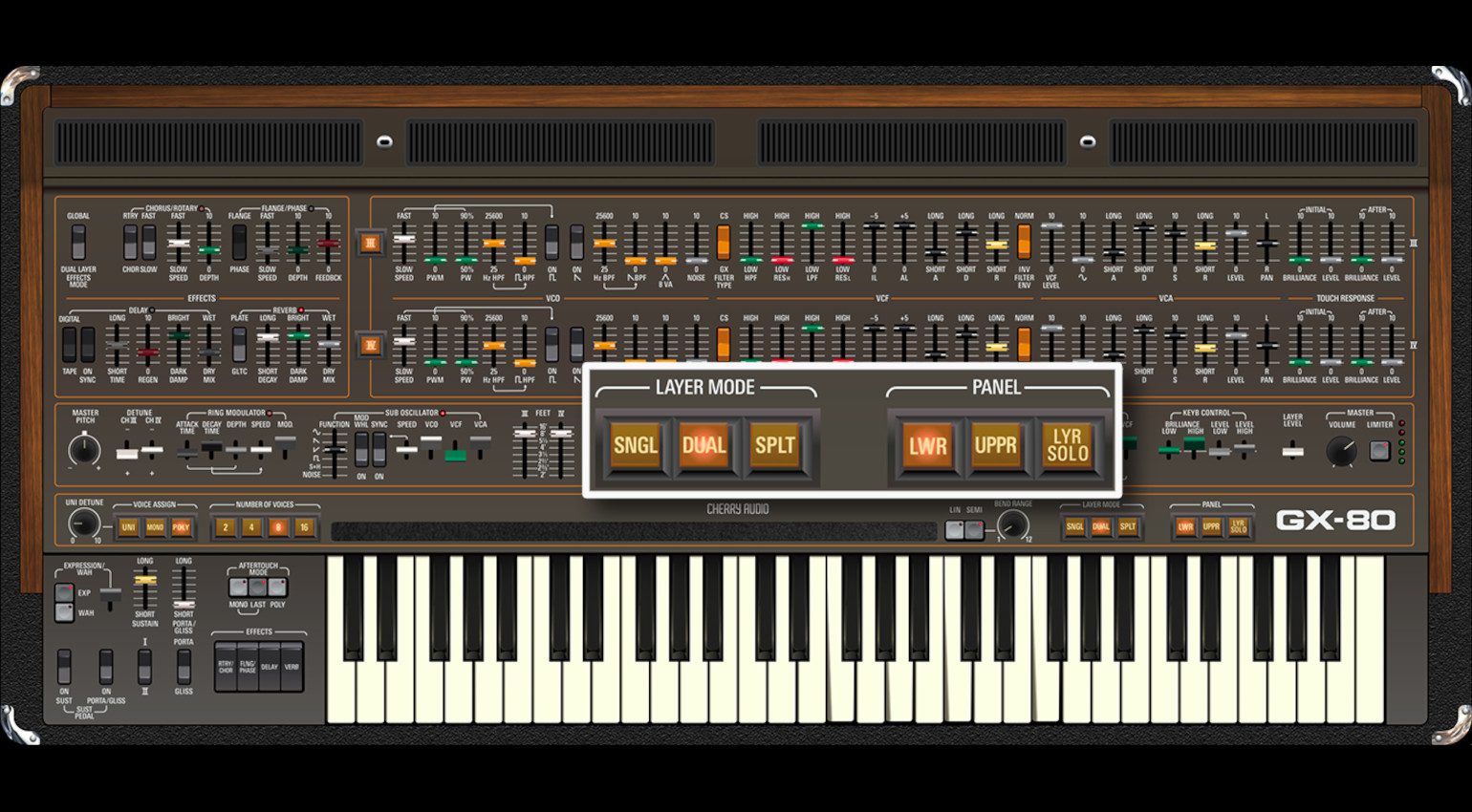 Cherry Audio’s GX-80 comes packed to the gills with presets from the likes of Drew Schlesinger, Dave Polich and James Dyson. Plenty to get you started, from classic sounds to new and wonderful sonic adventures. I know that most of you might well go exploring these collections for the obvious Vangelis sounds. Was a synthesizer ever so inextricably linked to one artist? Answers in the comments, please! But Cherry Audio have curated a fantastic library of new and impressive sounds that draw on the huge capability that the two paradigms afford.

Also included are a set of GX-80 factory presets and a folder called “Sounds Famous” that will sate the appetite of those desperate to sound like their CS-80/GX-1 wielding idols! 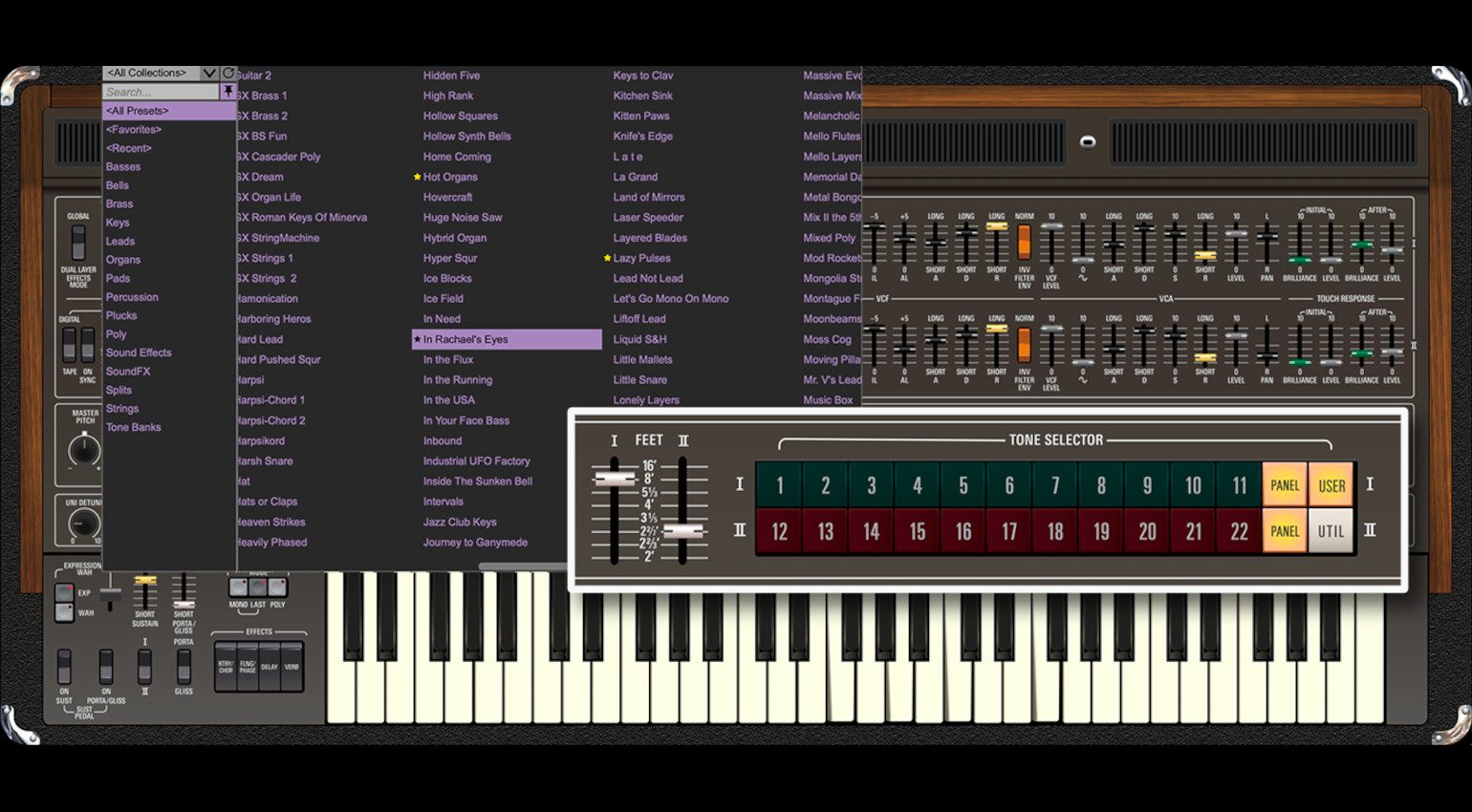 Purists will almost certainly debate accuracy and authenticity, with many never having spent any serious time with the original hardware. But for a mere $59, this is an incredible amount of synth and will scratch that CS/GX itch all day long. GX-80 is not simply trying to replicate the individual synths here. In my humble opinion, they are celebrating Yamaha’s rich analog legacy of that era and they do so very well indeed. 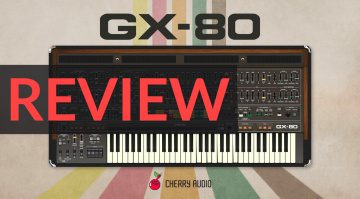 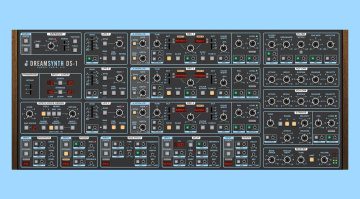 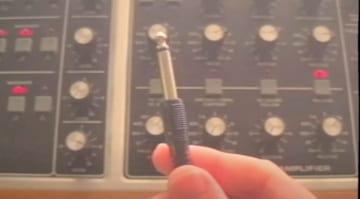 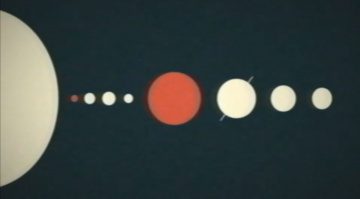 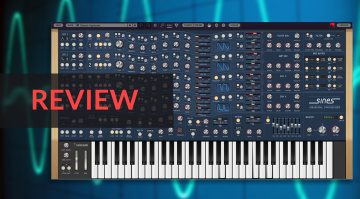