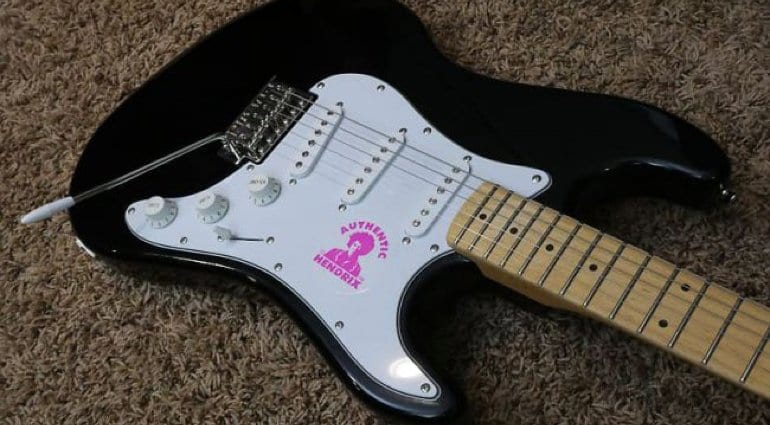 Remember the Gibson Jimi Hendrix Signature? Sure you do. These Hendrix-themed Stratocaster-esque guitars leaked on the internet in 2009; the project was killed off by the subsequent tsunami-sized backlash. Most of the stock was thought to be destroyed, but now a prototype of one of the models has surfaced and is up for sale on Reverb.com.

It isn’t a Fender Stratocaster, but boy does it mimic one! This god-awful creation was a collaboration between Gibson Guitars and Authentic Hendrix run by Jimi’s half-sister Janie Hendrix. Fortunately for the guitar world, it leaked online and all hell broke loose. The backlash was so big that the guitar was canned.

Gibson had just released a Custom Shop Jimi Hendrix Psychedelic Flying V model and it had sold well, so they evidently decided there was more commercial success to be had with the Hendrix name. Partnering with Authentic Hendrix, Gibson worked up some prototypes of a of cheap beginners’ guitar with the Hendrix name on it, with reverse headstocks. No, they weren’t Fender Stratocasters, but they looked awfully familiar.

Luckily, it never came to fruition, which made many players happy, myself included. Gibson was really pushing it with this particular model. It created a lot of hate in the guitar community. I sighed with relief when it got pulled. 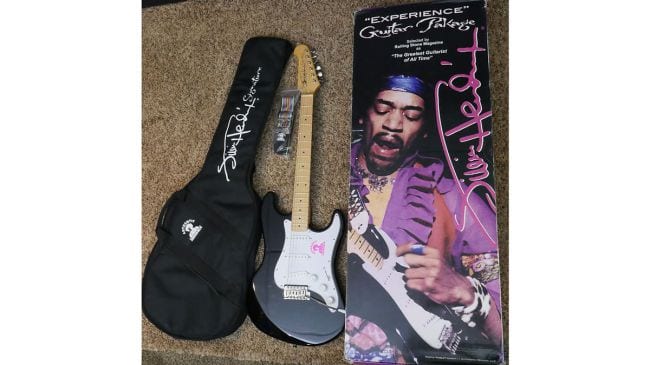 Good old Trogly’ Guitar Show of YouTube fame has hunted down an original prototype model and matching practise amp. He acquired it from Marko Coconut, the man who made the promotional demo DVD included in the beginners bundle. I’ve included a link to that video below.

The guitar is now up for sale on Reverb and is a curiosity, but certainly not a particularly welcome one. However, I think collectors will possibly be enticed by its rarity and back story.