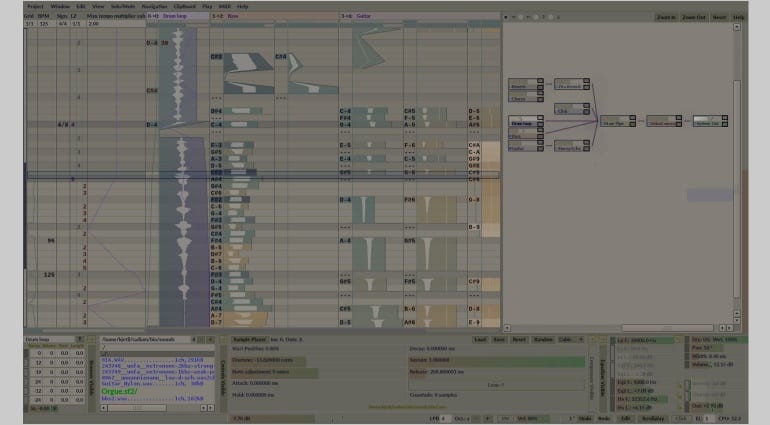 Trackers are not something you come across every day. There are traditionally number-based, a bit like music sequencing on a spreadsheet. And like a spreadsheet they can be enormously powerful, accurate, logical and quick to edit once you know what you’re doing. Radium takes the tracker format and fuses it with a graphical interface to give a more aesthetic feel to the numbers. They have just released version 4.

Compared to regular sequencers, the makers of Radium believe the editing is faster and you get more musical data on the screen. It is certainly a different way of working when compared to the traditional DAW or sequencer. The group say it’s as easy to learn as anything else. It has some very familiar features such as automation, piano roll and support for VST plug-ins.

Personally I haven’t touched a tracker since I was sequencing on my Commodore 64. There is a dedicated community of users out there including artists like Nasenbluten and Deadmau5. They are also popular for creating video game soundtracks.

Watching the video of the demo song (below) it looks quite remarkable. The vertical scroll, the variable speed, the modular nature of the effects on the right. It’s all very intriguing and slightly mystifying. But why should we stick with tradition when there’s always another way to try?

So what does version 4 offer? It says it’s the first stable release for OSX – does that mean the previous releases have all been unstable? They’ve added MIDI learn and automation recording. They’ve expanded the busses and voices, improved the graphical performance and you can now save songs with samples embedded. There’s been work done on plug-ins, including delay compensation and they’ve opened up support for multiple simultaneous MIDI inputs.

Radium uses a subscription model from €2 a month to get upgrade access and support – otherwise you can use it for free. It’s available now for Windows, OSX and Linux.

More information can be found on the Radium development website.