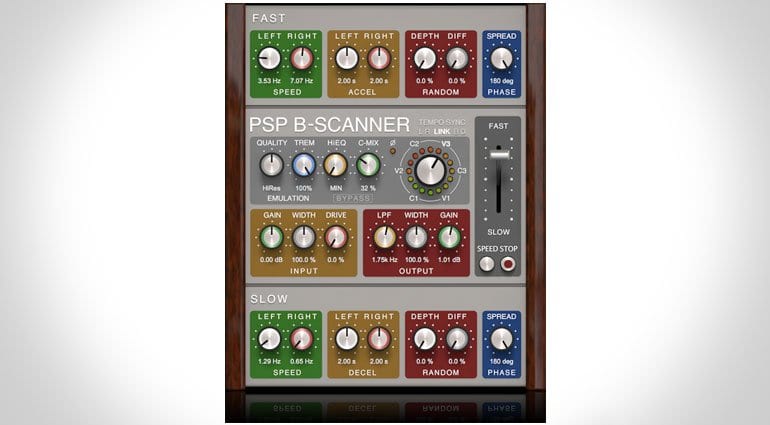 When talking about any kind of organ effect you immediately assume we’re talking about the rotary, tremolo effect of a spinning Leslie speaker. However the Hammond B3 organ also had an internal effects section of vibrato and chorus which was driven by a metal scanner. It’s this effect that PSP are attempting to emulate with the B-Scanner.

The Hammond B3 was deliciously mechanical with all sorts of spinning things and moving parts that gave it its classic sound. The vibrato and chorus sound was created using a tapped delay line. The scanner is a rotary capacitor used as a sixteen way variable switch to connect the taps to the output. When combined with the original signal it creates a phase shift which produces the desired modulation effect. On the original organ you’d get an on/off switch, depth select and a speed knob, but of course why have one knob when PSP can give you 25 and a slider.

The B-Scanner presents you with a load of controls to tweak and tune the effect to your liking. In the middle section are the global controls where you can select the mode between vibrato and chorus and up to 3 depth levels. A nice big lever gives you control over the speed with a button to toggle between “Fast” and “Slow” plus a stop button to, umm.. stop the virtual scanner from virtually spinning. The “Quality” control deals with the closeness of the emulation to the original letting you clean up and smooth the sound out as you turn the knob. You can also add some tremolo, increase the brightness and alter the chorus mix. Input and output stages have gain and stereo width and there’s a low pass filter on the output.

Beyond the global parameters PSP have added separate sections for the Fast and Slow settings giving independent control of their rotary speeds, acceleration, modulation randomness and stereo phase offset. The GUI is simple, clear but slightly cheap looking, but the sound is lush and harmonic, bringing in the right sort of movement and that very familiar sound. I do wonder whether there are any organ sounds out there that don’t come with their own vibrato section. I guess if you’ve always wanted deeper control over that sound then this is the plugin for you but perhaps its use on other instruments will make it more interesting.

You can download a free demo now and until the 30th April it’s $39 rather than the usual $69. Available for all plugin formats, OSX and Windows.