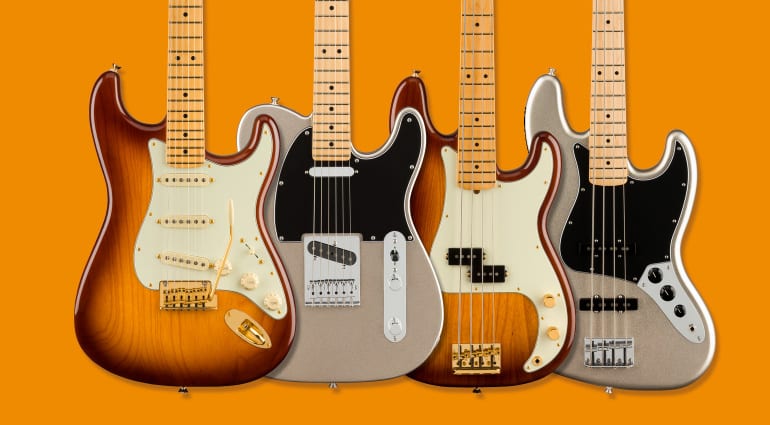 Previous Next
ADVERTISEMENT
In 1946, a certain Mr Leo Fender created a new company that was to change modern music forever. He called it the Fender Electric Instrument Company. Zoom forward to NAMM 2021: Fender has just announced a shed full of special 75th anniversary editions of its most iconic guitars. The limited edition models are spread across two ranges, with different specs, finishes and price points.

Fender hits a milestone in 2021 and these new models come in either 2-Color Bourbon Burst over an ash body or Diamond Anniversary finish all models feature  gold hardware and pearl button locking tuners. The models included are a Stratocaster and Telecaster guitars as well as the classic Jazz and Precision basses models. What is interesting is that Fender is offering two different price ranges here: the US Corona model and the more affordable Mexican Ensenada model. That’s great news for fans of Fender who want something special to commemorate this occasion.

These Mexican-made models have the Diamond Anniversary finish and come with Vintera ‘60s pickups. The Modern C profile maple neck is fitted with a set of medium jumbo frets; the body and headstock have a satin finish.

These two Diamond models come in a gig bag and have a 75th Anniversary neck plate to commemorate the occasion.

With a Deep C profile and rolled fingerboard edges, this US model should play beautifully. It comes loaded with a set of Fender Custom Shop Fat ‘60s pickups.

This Telecaster has the same basic specifications as the Strat above, just with a set of Fender’s Custom Shop Twisted Tele pickups. This 75th Anniversary Telecaster in 2-Color Bourbon Burst looks tasty. 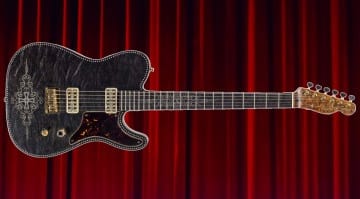 Fender Diamond Legend Cabronita Telecaster for sale at only €111,000!