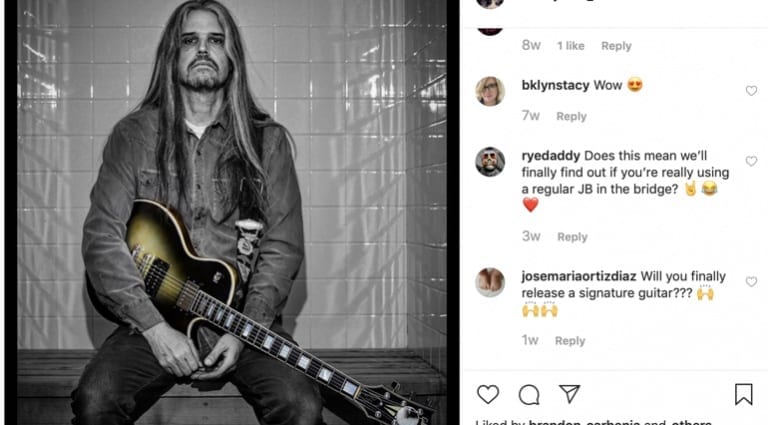 Gibson has finally confirmed the highly anticipated signature Les Paul Custom for Tool’s Adam Jones! The Silverburst model has already become a collectors’ item, so this signature is going to be hugely popular – even without Jones’ name associated to it.

I think the new Gibson Custom Shop recreation of Tool’s Adam Jones’ 1979 Les Paul Custom Silverburst is going to be huge. After all, the guitar is synonymous with the man and his jaw dropping guitar skills.

I’m a fan of everything about this release. OK, I’ll stop gushing soon, but my main Gibson Les Paul is a black ’77 Custom and it is my favourite Gibson by far. I own a few Custom Shop and standard US models, but this old ’70s dinosaur is the best by a long way.

For me, not being a Gibson ’50s purist, I love the snap of the three-piece maple necks combined with the maple cap common for this era. Hand on heart, I’m also a big convert to the neck volute, which I know many players baulk at. But for me, this is what a rocking Les Paul Custom is all about. Plus, The Cult’s Billy Duffy rocks one and he knows the score.

Yup, this new Adam Jones signature model has me squealing like a little girl, but we probably won’t see one until later in the year. But to have it officially confirmed is fantastic news and one that I am sure all Tool fans are looking forward to.

We know he likes old ’90s Seymour Duncan Distortion pickups and huge frets, so expect the specification of this new signature model to follow suit. After all, he owns six original Silverburst models all with similar setups. Roll on 2020! I can’t wait for the release of this little beauty. Until then, you can soak in the band’s Fear Inoculum album to tide you over.

I would suggest you all keep an eye out on Instagram, Gibson.com and Tool’s official site for further announcements on this one.