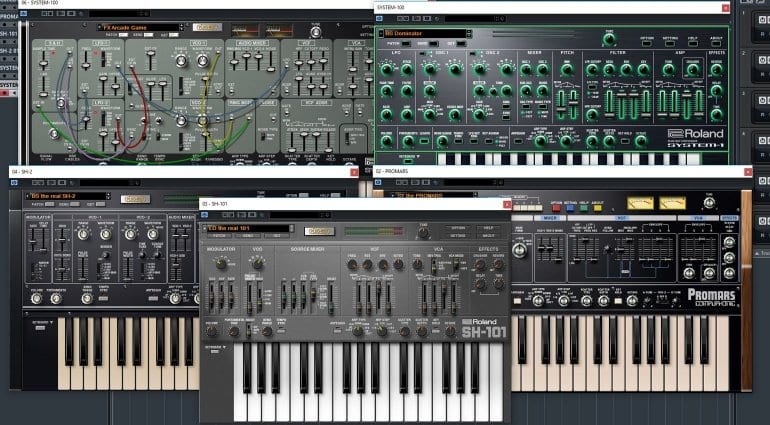 Roland have unveiled the beta version of their new Roland Cloud subscription model. It’s designed to give you access to software versions of all their ACB Plug-Out synths plus sample based instruments. The damage will usually be $29.95 a month but this early access beta version is set at $19.95. As a NAMM special you can sign up for one free month right now (although that window may now have passed).

So what exactly does this mean? Well, right now I am playing with a genuine and authentic ACB version of a Roland SH-101, SH-2, Promars, System 100 and System-1 for free. And they are flippin’ awesome! No Plug-Out hardware required, these are software versions sitting in my DAW. They are stunning, I am speechless.

I’ve put together this video of a bunch of the presets for all the synths:

But not only that. There’s something called the Anthology series which, they say, “captures the essence of iconic synthesizers that you loved “way back when” and puts it at your fingertips today.” The first instrument is called Anthology 1987 and, oh-my-god, it’s a D-50. It has that slap bass, and brass and future pads and it exactly captures that essence they were talking about.

The Anthology installs in an instrument browser plug-in called Concerto which gives you access to the “Cloud Instrument Library”. So presumably this is only the first in a series of instruments.

There’s another section called “Acoustic” and this currently holds the Tera Piano. The Tera Piano is an 8TB sample library hosted in the cloud. It uses RAINLINK which is a high-resolution communication technology to give you precision control over expression. A bit like a high-resolution MIDI. When you install the Tera Piano it downloads about 1GB as a local version for you to play in real-time. Then you can render your performance in the cloud using the whole depth and extraordinary sample size of the full 8TBs. To be honest I’m too scared to even attempt to install it. They have Tera Drums on the way. Check out the video below for more details and sound examples.

So the big question will be – are these instruments valuable enough and useful enough to you to justify $30 a month? I mean I wouldn’t mind paying 100 quid or so for the bundle of Plug-Out synths, or maybe 50 quid each to keep, but to keep on paying gets a bit frightening after a while. It really depends on what else is coming along. If you’re getting access to a continually evolving collection of instruments then it might be worth it. You could easily spend $360, a years subscription, on a new sample based instrument library at least one a year, if that’s your thing.

Very interesting Roland – well done! If you want to try this out then head over the RolandCloud.com and create an account. Have fun!

8 responses to “NAMM 2017: Roland Cloud gives you all their Plug-Out synths as plug-ins”