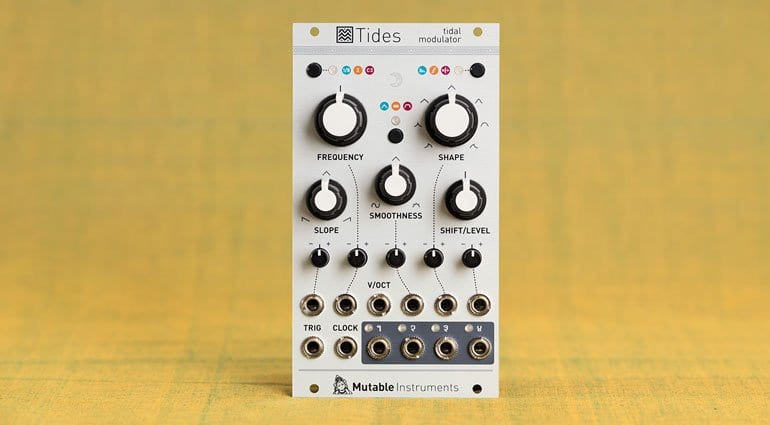 It’s kind of an LFO isn’t it? Mutable modules often do more than they should and the Tides is no exception. It’s about waves going up and down, flowing in and out, modulating CV as it goes. But it comes from a context of an envelope, an AD envelope which is then looped to give us repeating cycle of modulation. Although they don’t have to repeat. It can do Attack-Decay and Attack-Release quite happily without all this looping business.

However, the shape of the envelope is a whole other matter. After the traditional triangle shape it goes through a wavetable waveshaper providing linear, exponential, logarithmic, sinusoidal, or arc-sinusoidal shapes for the A and D segments. Then, a second processor applies either a 2-pole low-pass filter to the waveform, smoothing its sharp edges; or a rubbery wavefolder, adding kinks and bounces to the waveform.

The new version has had a small facelift, bringing it in line with newer and expanding line up. The software has been redesigned and rewritten to make it more accurate and to give a higher audio quality. But the main functional differences are in the additional output modes that provide variations of the main signal. These are all to do with shifting amplitude, phase, time and frequency. They cascade out of the 4 outputs in different forms created a very versatile modulation device.

Mutable Instruments  Tides (2018) should be available any time now for €229. And I’m sure some cool videos will be along soon.