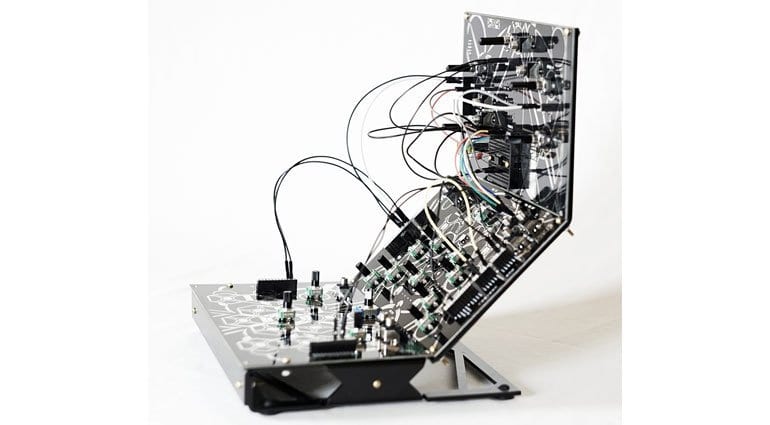 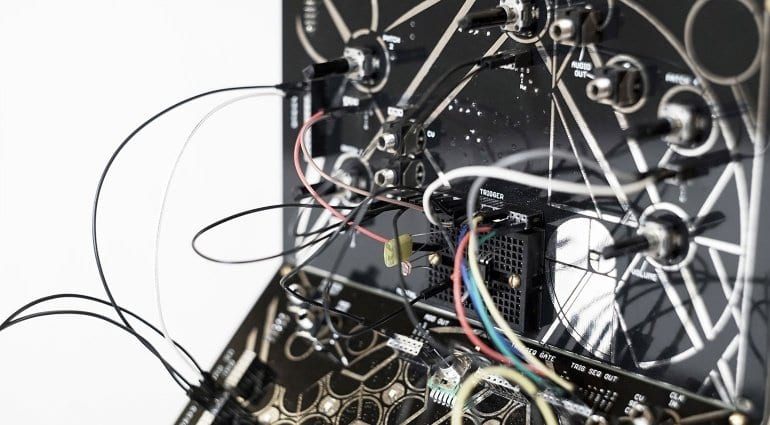 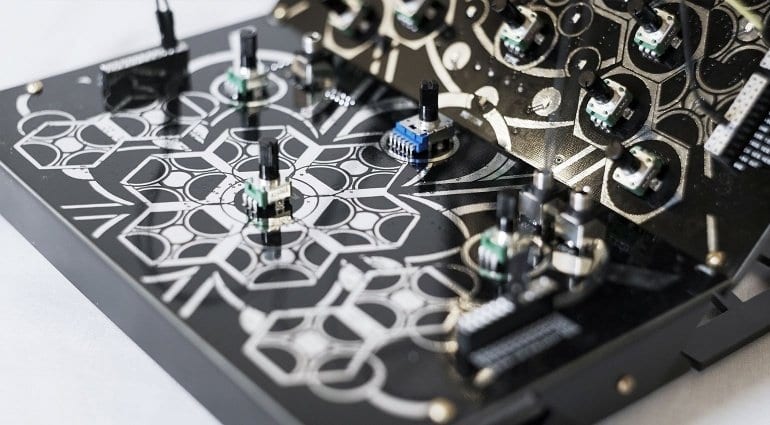 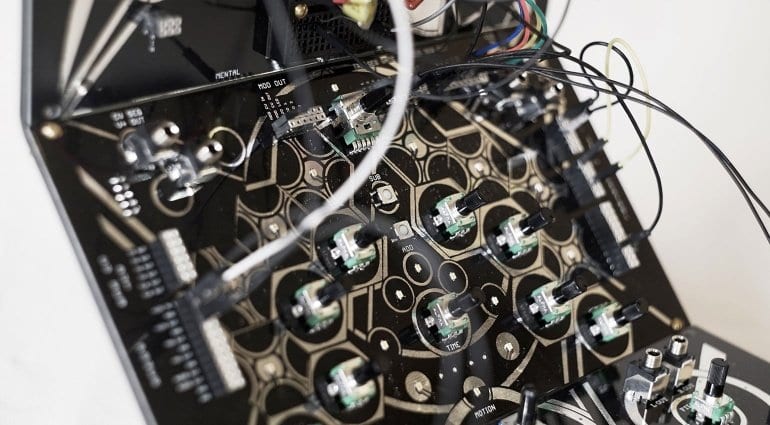 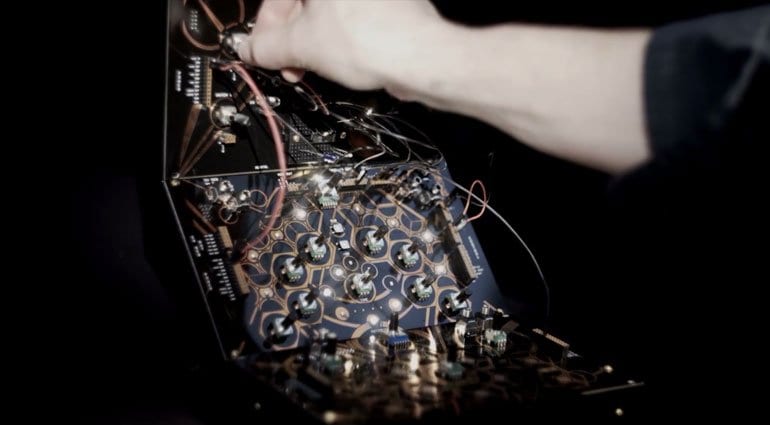 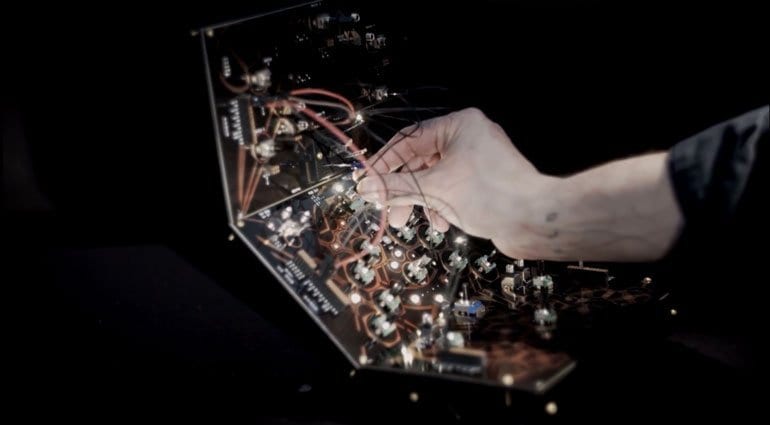 Folktek is an artistic collective formed to create extraordinary instruments and sonic experiences. Mescaline, an experimental, modular synthesis system, is the latest work from member Arius Blaze and has been launched on Indigogo in the hope of raising $20,000 to put it into production.

It’s a 3-tier synthesizer which explores art, design, electronics and sonic experimentation. The word “mescaline” is also a compound found in the peyote cactus famous for its hallucinogenic and intoxicating qualities. It can drop into a Eurorack system or can be operated completely stand-alone. And it stands alone, looking simply beautiful.

Each tier has its own unique functionality and personality.

The bottom “Channel” section is a 10 note polyphonic synthesizer. It runs through a massively infinite (almost) custom designed reverb. They are planning to add further effects to the DSP now that their initial goals have been met. The design on the surface is also a touch-plate that contains 10 tuned keys. Sound is generated by moving your fingers over the keys. 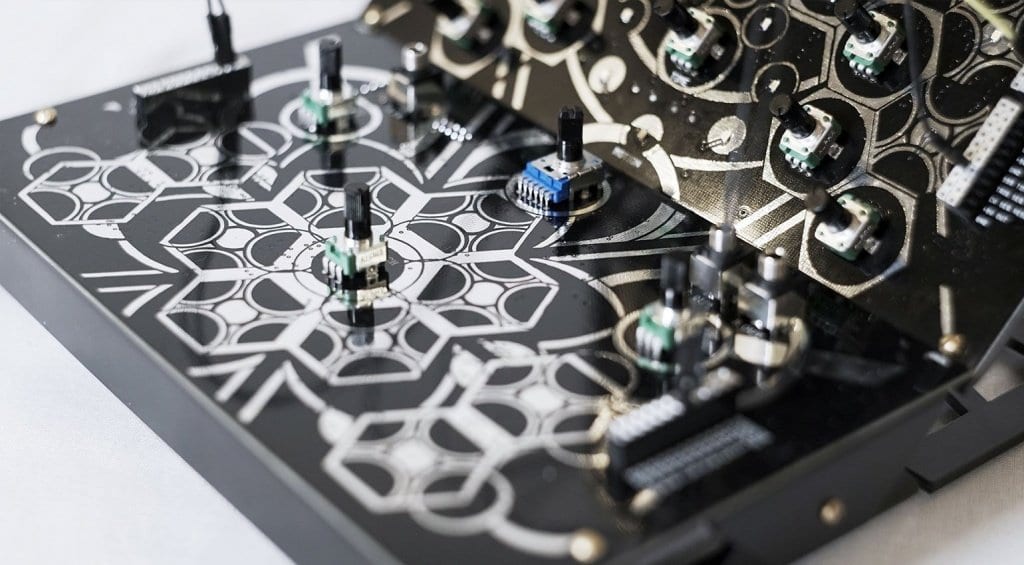 The middle “Motion” section contains two sequencers. One is an 8-part CV sequencer for controlling melodic parts, the other is an 8 part trigger sequencer for rhythm and percussion. Each sequencer has a 5 part clock division. There’s also vactrol-based sine modulation. There’s an additional integration of the trigger sequencer with the Mental section using opto-couplers. This gives it an ability to create sounds, textures and rhythms that voltage sources simply can’t. 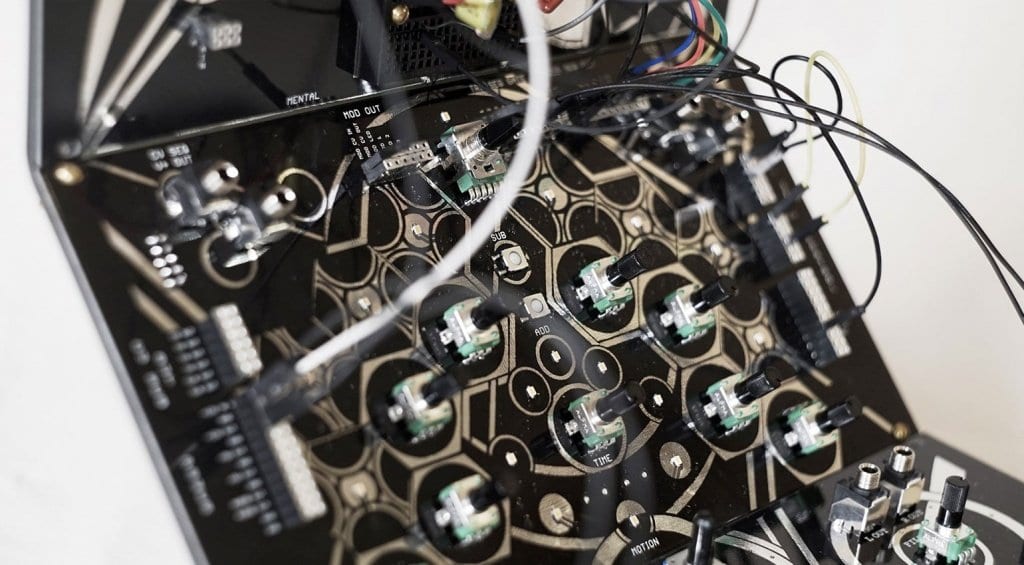 The top “Mental” section is, apparently, many things including a bit of a bonkers drum synth. They say “It will generate odd and beautiful beats for days.” It’s also a drone synth with multi-oscillations and in-circuit filtering. It can process incoming audio, chop it about and turn it into something new. Mental has been developed from a number of other Folktek projets. It has 17 input points to control synthesis and filtering. There are 4 pots for patchable parameter manipulation. And it can all be connected back to Channel for some endless reverb action. 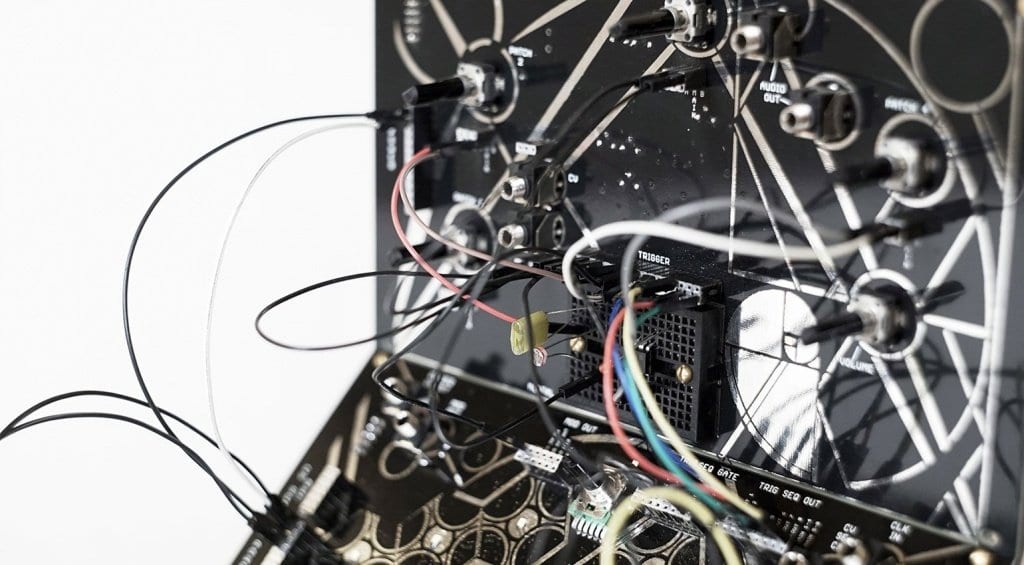 It’s a wonderful thing. A beautiful device that offers adventures in sound and explorations in aural excitement. The reverb and the rotating lights gives the whole experience and massively ethereal feel. It uses those annoying patch wires to make connections, but they do fit with the size and shape of Mescaline. There’s so much going on here that I imagine you could lose days experimenting in what is essentially a sound generating work of art.

The early bird systems have all gone and so a Mescaline is now going to cost you $449 plus shipping, but that’s still a bargain considering the proposed $699 retail price. You can also purchase the sections separately although they advise, remarkably honestly, that Mental is really the only section that’s awesome on it’s own – the others benefit greatly from each other.

For more information head over the Indigogo webpage or the Folktek website.