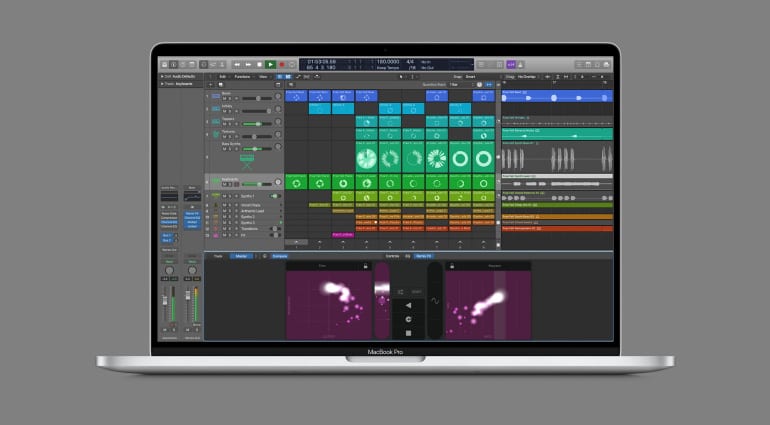 Big news for Logic Pro users! Session view is coming to Apple’s Mac-exclusive DAW. The announcement comes from the Apple Education Products webpage where a picture of a MacBook Pro showing Logic Pro X running in a brand-new Session view has appeared.

Session view is best known from Ableton Live. In Session view, audio and midi tracks are presented as vertical columns, and the horizontal rows contain so-called clips. These are audio and midi files. Each column can play one audio or midi clip, and all columns can play simultaneously. Additionally, clips from each horizontal row form so-called Scenes. This provides a very fluid way of composing with loops and patterns, as all clips and scenes are played in perfect sync with each other thanks to Ableton’s renowned time stretching engine.

Well, Logic also very good time stretching functionality. It’s called Flex Time and is mainly used for beat mapping and time correction. Now, it appears Apple is going to harness Flex Time’s power to provide an alternative to Ableton’s clip launcher. This way, Logic users will be able to switch between linear and session views – composing in the latter and recording into the former for arranging and editing. Sounds like a powerful update is headed to Logic Pro!

Logic’s new session view differs a bit from Ableton’s in that audio and midi tracks are still horizontal. However, instead of linear regions, they now contain clips. You can click on clips to launch them and I assume they play in perfect sync – that’s kind of the whole point. Linear waveform views are still available to the right side, presumably illustrating each clip that is currently highlighted or playing. So it’s not an Ableton rip-off we are seeing here, but rather Logic’s developers’ take on the Session view concept. Very interesting, indeed!

Alas, there’s no word on when the new feature is coming to Logic, or if it’s even coming at all. But now that the proverbial cat is out of the bag, it would be unlikely for Apple to keep Logic’s Session view confined to the Education Products page. We’ll publish more information once it’s available.