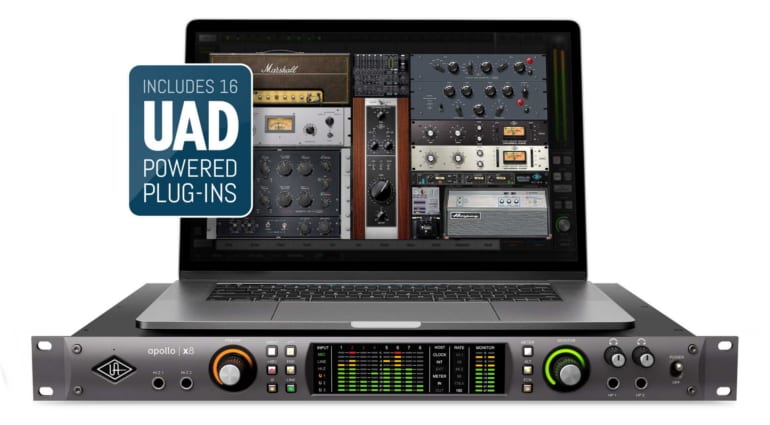 We understand that Universal Audio is prepping a pair of brand new audio interfaces for release – the Apollo x8 and (presumably) the Apollo x16. They are yet to be officially announced, but some marketing material has leaked out on the Internet via eBay.

According to the eBay listing we’ve seen, here’s what to expect for the updated Apollo 8: Although the same four mic preamps with Unison tech seem to be the same, the DSP has been upgraded, with a new, Hexa-core engine that the marketing blurb says generates 50% more processing power than prior devices. 7.1 Surround Sound monitoring is available as well, although the predecessor Apollo 8 already had 8 line outputs.

What else is new in this updated Apollo 8? There are new “Elite” 24-bit/192kHz converters with 129dB dynamic range and -118dB TD+N – very good specs comparable to a standalone DAC. It runs over Thunderbolt 3, which is backwards-compatible with TB1 and T2 Macs through an adapter that’s sold separately. At first look, those are the main areas that have been upgraded.

Apart from that, most of the functions from the Apollo 8 have been retained. The front panel looks pretty much identical. You can also cascade up to four Apollo X8s, as with the original Apollo 8. But overall this seems to be a serious upgrade.

We hear that Apollo x8 ships with the Realtime Analog Classics Plus plug-in package with 16 plug-ins including the LA-2A, 1176LN, and Fairchild compressors, the UA 610-B tube preamp & EQ, a Marshall guitar amp and an Ampeg bass amp. There’s also a selectable +24dBu switch for compatibility with mixing consoles and tape machines.

Marketing material for the x16 is not available for the moment, but we presume it’s an equivalent version of the existing Apollo 16.

The original leak came through an eBay auction, which has since been pulled. The price advertised there was USD 2,499. Availability information is unavailable at the time of writing, but UA will no doubt tell us soon when this product is announced officially.

More information, such as confirmed prices and release dates will be published here as it becomes available!

Update: This post has been amended with information we’ve received since publishing the original article: we stated in a previous version that an Apollo X6 version is being planned. We now believe that the X8 will be followed up with an X16.