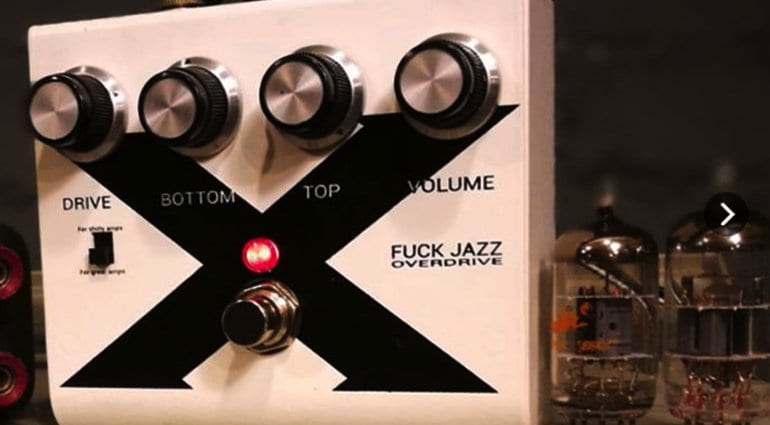 LAA-Custom’s ‘Fuck Jazz Overdrive’ is a new signature pedal designed for Phil X, the YouTube star turned Bon Jovi gun-slinger – who seems not to have a lot of love for one particular music genre…

LAA-Custom’s new signature drive pedal is officially being launched at NAMM 2018, so there are not a lot of sound demos available as yet. What’s different about this pedal? For one thing, it has a Shitty/Great Amps selector switch. There’s also a two-band EQ circuit which, it’s being claimed, allows you to tweak the drive tone “without altering the mids or cutting the low-end”. That sounds useful, especially if you spent ages dialling in your amp tone beforehand.

LAA-Custom uses its own proprietary TrueCoil technology which is essentially a miniaturised output transformer paired with a Class A drive circuit design. This all sounds very interesting, but I am not sure I would know if this was any better or worse than other similar designs, but I am intrigued to hear it in action.

Phil X is a loveable YouTube star who came to prominence on FrettedAmericana before going on to make the grade as a professional player. His work with Bon Jovi subsequently propelled him to guitar stardom. He has made a few forrays into signature products before with both guitars and amps, all of which have been well received by the public. But most have been of the ’boutique’ variety, with a price tag to match. So this new overdrive pedal falls in line with that model.

The first batch of the FJ Overdrive is limited to 100 signed units. Hopefully we shall see some unsigned editions at a lower price after the initial batch has sold through. I think this could be a good-sounding pedal. The price isn’t astronomic, being within the kind of price you’d expect of a boutique overdrive. But I would really like to hear some decent demos first, as the LAA website doesn’t (yet) have much to listen to.