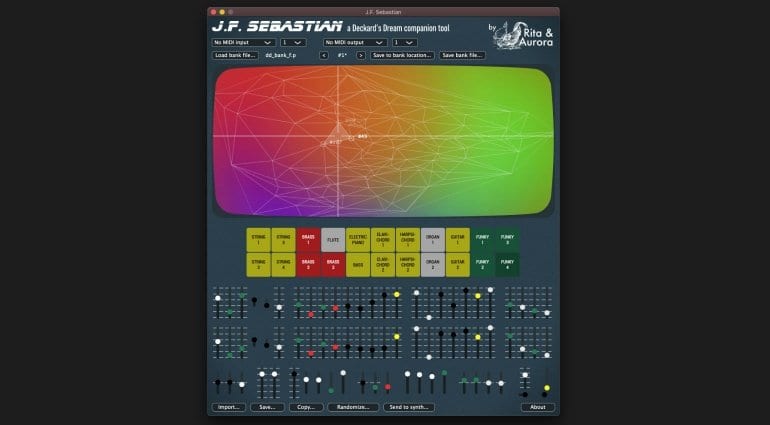 Named after the ill-fated geneticist in Ridley Scott’s Bladerunner it provides new ways to control and explore the sonic possibilities of the Deckard’s Dream synth. You can run it as a standalone application or as a plugin. It turns all the sliders on the synth into automatable and modulateable parameters within your DAW. You can also load preset bank files, edit them and export them.

So what’s that big colourful space in the middle then? Well, when you import a bank J.F. Sebastian does some clever AI jiggery-pokery to create what they are calling a “Timbre Space” which is a 2D projection of the preset data. You can then play in the Timbre Space to generate new sounds without all the mucking about with the sliders. It creates a mesh of triangles where presets are defined as one of the triangle corners allowing you to morph geometrically between them.

Another feature is the CS-80-like tone selector for choosing upper and lower layer sounds. These access a bank of original CS-80 presets created by Paul Shilling.

Then at the bottom is a visual representation of the Deckard’s Dream sliders that can be automated or modulated from the DAW.

It is somewhat unreal to see the editor move and to see the presets morph in the Timbre Space. The sound is all coming from the Deckard’s Dream synthesizer which is easy to forget when fiddling with software. J.F. Sebastian offers a real opportunity to move beyond the original programming of the synthesizer into places you’d never thought you’d get to.

J.F. Sebastian is free of charge and open source for MacOS and Windows.