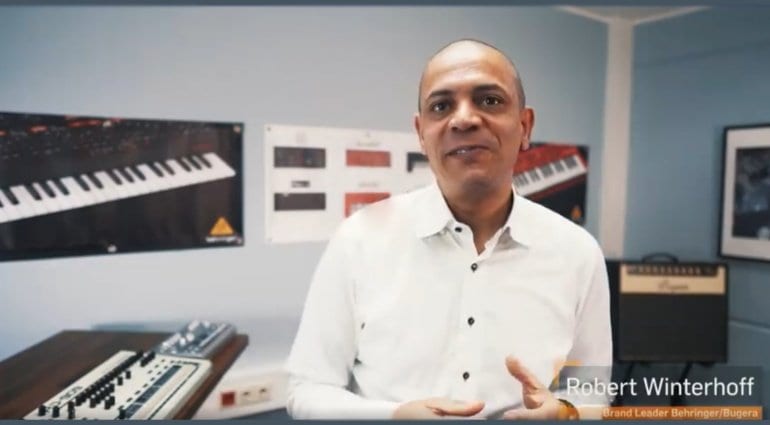 Behringer has been racking up the hype over their soon to be legendary pre-NAMM party. There’s a lot of talk about the new synthesizers and drum machines that you’ll be able to check out – that we already know about. But they’ve also been dropping hints that there may be something that no one has seen. Uli Behringer can’t resist spilling their plans all over the internet so is it even possible that they’ve kept something back?

Word on the street is that it’s going to be a clone of the Roland TB-303. Is this rumour based on a keyed-in anonymous source within Behringer HQ? Hardly. It’s mainly just an out-of-focus shot of a device sitting beside an RD-909 in a promo video for the pre-NAMM party.

I mean it’s a silver box of about the right size but it’s also oddly coloured and has too many knobs. Which of course might be right if it’s an adjusted tribute to a TB-303.

But Uli has talked about other synths that we haven’t seen yet. And then there was that bizarre webpage mishap where Behringer published a load of synths on their websites which apparently were just muses and thoughts and not real products. These included the Wasp, the 2600 (ARP), CAT, Synthi VCX3 (The Putney) and K-20 (MS-20). It also had the MS-101 which we now know became a reality. Could one of these be the mystery synth?

Although Behringer to my knowledge has never mentioned the TB-303 as a possibility it does make a lot of sense considering that the RD-808 and RD-909 are poised for release. I guess we’ll have to wait until the party on Wednesday to find out.