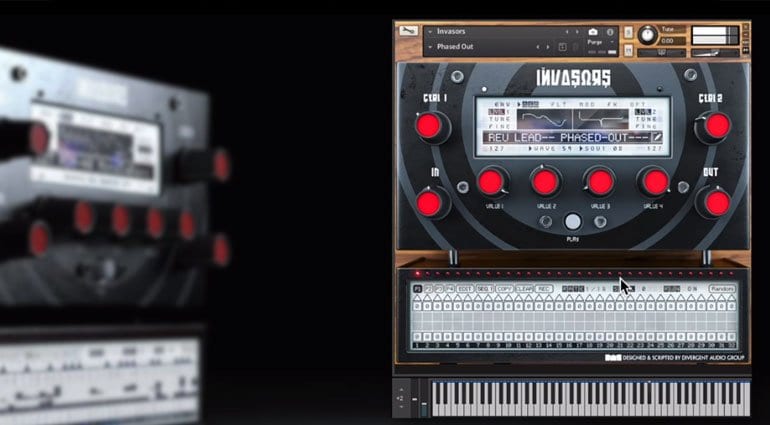 I confess to being a little bit bored by Kontakt-based instruments. Even the more inspired ones like those by Output seem to follow the same basic format and editing/modulating structure. So it takes a lot for me to be impressed by something claiming to be a synthesizer and offering a more hardware feel to the functionality. Invasors hopes to impress.

All the graphics are very clever and fool you into thinking this is a piece of hardware – it’s not. It’s a Kontakt instrument but the GUI design brings in an uncanny sense of hardware, which gives it a really good feel. The basic idea is that you have a main, synthesizer style, LCD-type screen, surrounded by 8 knobs that provides you with the entire editing interface. Map the 8 knobs to a hardware controller and you have a fully editable synthesizer right at your fingertips. Two of the knobs control the menu and selections on the screen, two control in the input and output leaving four knobs control parameters relevant to the selected function. Super easy to use and navigate.

Invasors has 2 oscillations with 128 waveforms. They say they can “be combined in a variety of exciting new ways” although they don’t really say what that means. I’m sure it’s very exciting though.

Beneath the main interface is an interesting looking sequencer. It’s again trying to look like a hardware LCD screen which makes it authentically small and fiddly. However, it appears to work very well and gives you comprehensive control over things like glide, pitch, velocity, length, filter and so on. There’s room for an awful lot of sequenced movement and modulation. The sequence can also be exported as MIDI patterns into your DAW.

It seems to be designed with hardware control in mind. The NKS integration with Native Instruments controllers gives a seamless tweaking experience. This hardware focus is both awesome and yet restrictive, easy and yet annoying. There are only actually 4 knobs available at one time for tweaking. So there will be a fair amount of menu diving. Why not have 8 knobs to control more aspects of the synthesizer at once? Having mini screens on hardware is usually seen as a limitation as opposed to being something to emulate. The beauty of software is that you can show as many parameters as you like, as big as you wish, without the restrictions of hardware. However, the GUI does give off a pleasing hardware vibe and that’s uncommon in software and in Kontakt in particular. It even has a power switch which sort of unfolds the synthesizer which is both unnecessary and lovely.

So, there are pros and cons to this sort of approach. But the familiarity of the interface, the way you are not having to access tabbed pages, really works in Invasors favour. As does the sound – which is really very good.

Invasors is designed and built by Divergent Audio Group and is available now from Kontakt Hub for £93.50 (usual price £110). It requires Kontakt 5.5 or above and will also run in the free Kontakt player. More information on the Divergent website and in the Kontakt Hub store.