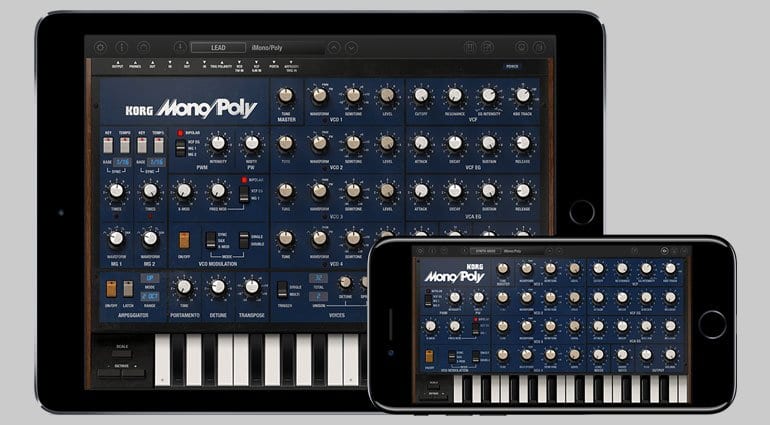 Korg take its classic 1981 analog synthesizer and spin it into iOS. The iMono/Poly attempts to recapture its fat monophonic sound and ground breaking 4 voice polyphonic technology.

I find myself with a mixture of excitement and disappointment at the announcement of synthesizer apps. Disappointment because I initially thought this was a hardware release. It’s getting increasingly common for old synths and technology to find itself physically resurrected so the reissue of a Korg classic is not too far fetched. But still, the excitement of a cool and extremely desirable synth making it to iOS is still there – it’s just that I can’t quite get myself fully on board with it.

The iMono/Poly reproduces all the original features of the hardware Mono/Poly, down to the stunningly familiar GUI. It’s those 4 oscillators that give it its trademark thick and fat sound and those are modelled to a tee. There’s a lot of sound design potential from the filter with its own envelope and the sync and cross-modulation.

Of course, they couldn’t leave as an authentic reproduction. There’s always room for new features in software. They take the form of two multi-effects units and 8 virtual patches. The virtual patches are like a modulation matrix with 159 sources and 35 destinations. A lot of thought has gone into to movement from editor to patches and controller pages and these appear to be pretty slick. I am very much liking the XY vector pads.

Comes with a load of presets, templates and integration with Korg’s Gadget app.

It will require a very current iPad or iPhone to run. Anything below an iPad Air can forget it. And this where the excitement starts to drain. The iPad has an amazing range of fabulous synthesizer recreations available for ridiculously reasonable prices. But the iPad as a platform does not lend itself very well to multitasking huge software synths. Apps like AudioBus make all sorts of things possible but still iOS creaks with the task of rendering all that modelled audio. To make serious use of these synths in a live or performance setup seems to require multiple iPads. Otherwise, you are layering them up, one at a time in the studio. It’s such a shame that these synths don’t make it to the desktop where the power, interface and controller support could make them viable live instruments along with many others.

Anyway, look at that, it’s $19.99 for an extraordinary recreation of a legendary synth, on your iPhone or iPad.

The video definitely gives you the impression at the start that this is a hardware release!