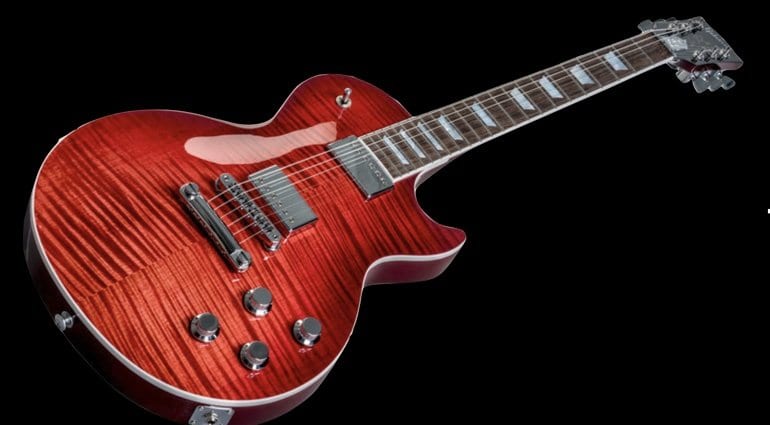 The new Gibson 2018 Les Paul  models are now out, with various Gibson dealers showing stocks. We now have details on the whole new LP range for the 2018 line-up. They still don’t appear on Gibson’s own web site, but here’s a quick round-up of the new Les Paul models for 2018.

All of the guitars in the 2018 range have now got cryogenically treated frets. This is a process where the fretwire is exposed to extreme cold before being installed on the guitars. The whole process supposedly increases the hardiness of the fret wire and decreases the chances of them wearing out as fast as regular frets.

I smell a touch of snake oil with this ‘upgrade’. It isn’t exactly groundbreaking, either, as Gibson were advertising this back in 2014. You have to wonder if this enhancement is really going to help with sales.

Gibson are making a concerted effort to include left handed versions of all the new 2018 models. This I think is great, as it means that if you really want a certain model, you know you can get it, even if you are a lefty!

A lot of the new guitars in the 2018 line-up have Slim Taper neck profiles, which is cool if you like that profile and so I can’t really complain about this. I personally prefer a meatier neck, but I’m not averse to playing slim necks, if a guitar sounds good.

With AAA+ flamed maple tops and a single piece mahogany back, these are the top end standard Les Paul HP (High Performance) models for 2018. Each one has the asymmetrical slim-taper neck, a belly cut for comfort and cryogenically treated frets. There is a new way of of attaching the Burstbucker Rhythm Pro and Lead Pro+ pickups to the guitars. The more traditionally-minded players might hate this, as it does look a bit weird.

Colour-wise, the HPs feature Blood Orange Fade, Mojave Fade, Heritage Cherry Fade, Cobalt Fade, Hot Pink Fade. You can get the Standard version in the same colour schemes, but as bursts and with regular pickup mounting, and save around £500 in the process.

Again Gibson are putting the infamous G-Force automatic tuners on the HP version of the Les Paul and I really wish they wouldn’t, as they are nothing but a pain in the a*** to use. I had a set on my 2015 Les Paul and got rid of them as I found them to be really poor and very difficult to use effectively. Why have they chosen to use them again I will never know, but personally I think they suck. 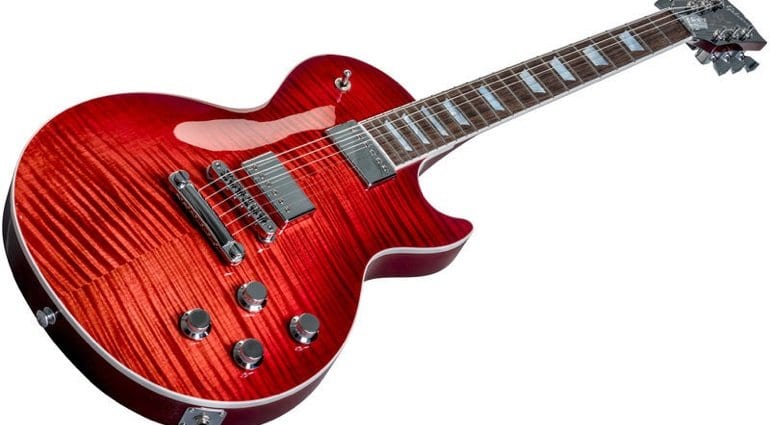 The 2018 Les Pauls are offered in Traditional and Classic versions, with the Traditional being what I would have called a Standard back in the day. These have no weight relief and PAF humbucking pickups, with very traditional vintage style appointments. No robot tuners or weird hybrid hardware here!

The Classic is a particularly interesting version of the Les Paul as it now comes with a set of P90s. They have even got a rather fetching Pelham Blue version on offer as well this year! Again, no weight relief here, so expect a beefy guitar and one with plenty of sustain (hopefully). 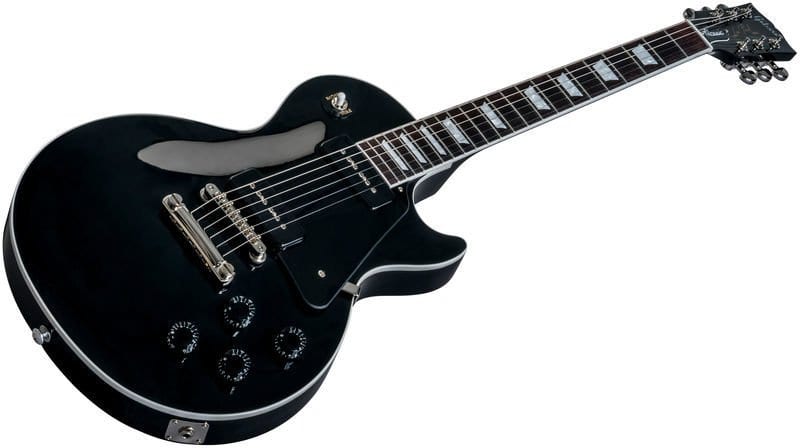 The 2018 Les Paul Studio is your more ‘back to basics’ single-cut, with less frills. Yet these still maintain the core Les Paul tones and hardware. I’ve seen dealers in the UK listing a Smokehouse Burst and a Vintage Sunburst version of the Studios. We don’t have details suggesting that specifications have changed drastically on this model, so I presume they will have the aforementioned enhancements that Gibson has applied across all its 2018 offerings.

Gibson has added binding to the neck and you do a get a coil split via push/pull on tone controls, so a few extras compared to older models.

Pickup-wise, you get a set of 57 Classic in the neck and 57 Classic + for the bridge position. I really think for a ‘studio’ version that they are over-priced. 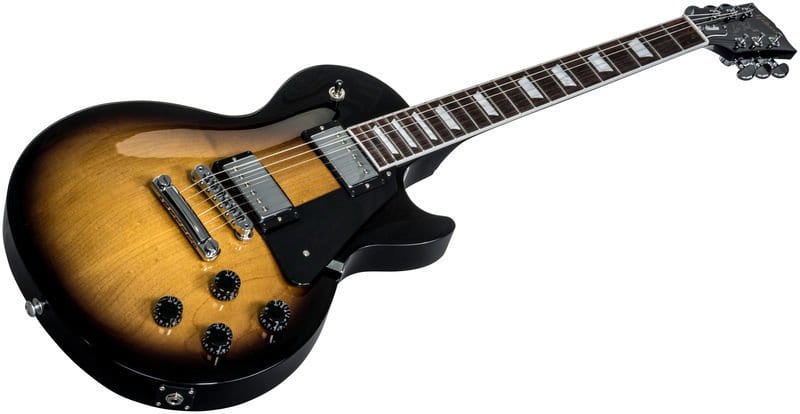 The Tribute is the more traditional of the two. It has no weight relief, and sports medium-output humbucking PAF pickups. The Faded 2018 has weight relief and I would imagine comes in that non-glossy nitro finish.

These are loaded with 490R and 498T, both of which are a bit more modern sounding. Both are offered at much lower prices than the full 2018 Traditional Les Paul model, so expect some cheaper components and materials, such as woods and so on. 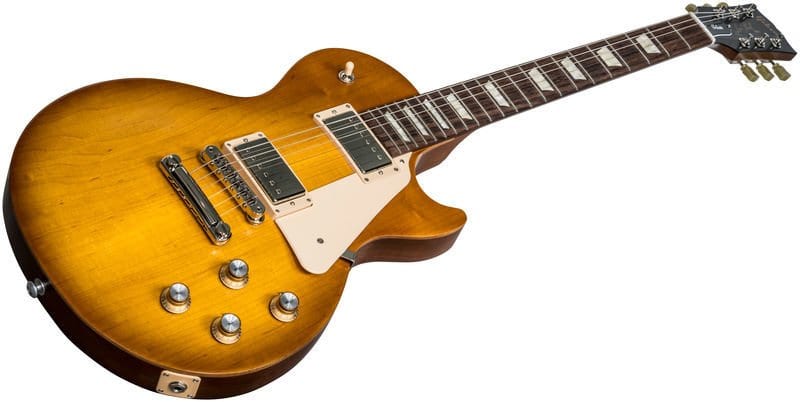 My personal opinion here is that Gibson are trying hard to offer us a good quality, hand-made guitar that is built in the USA. My issue is the price. They cost way too much for us players in the UK to consider buying at full RRP. Now, my other immediate concerns are things like quality control and the cutting of corners on the cheaper models, both of which Gibson has suffered badly from in the past.

Also: is using rosewood throughout all these models a great idea?

Surely, the CITES regulations are forcing manufacturers to avoid using. Won’t all the extra paperwork needed to ship these guitars to the UK cost Gibson? Are we soaking top that extra cost? And would it be worth destroying the environment in the name of tradition?

I am not pleased to see the G-Force tuners being used again, as I honestly feel they are useless (just my opinion, but one I am sticking too, sorry). Cryogenically treated frets sounds like a gimmick to me and so I can take them or leave them. I am not sure I would notice any difference, anyway. I’d prefer that they were just dressed and polished properly, which is something Gibson has got wrong in the past.

I am not convinced at all by the 2018 Standard HP models. They just look plain odd, with their aluminium knobs and weird fade finishes. They do nothing for me at all.

There are also a whole slew of new models including SG, Explorers and Flying Vs, but for now I would love to hear all your opinions on the new 2018 Les Pauls. Feel free to comment below and let me know your thoughts.

They aren’t listed on the main Gibson site yet, but I have spotted them all over at Thomann in Europe and across dealers in the UK. A few have even made demo videos as well, so I have included a couple below for you to check out.