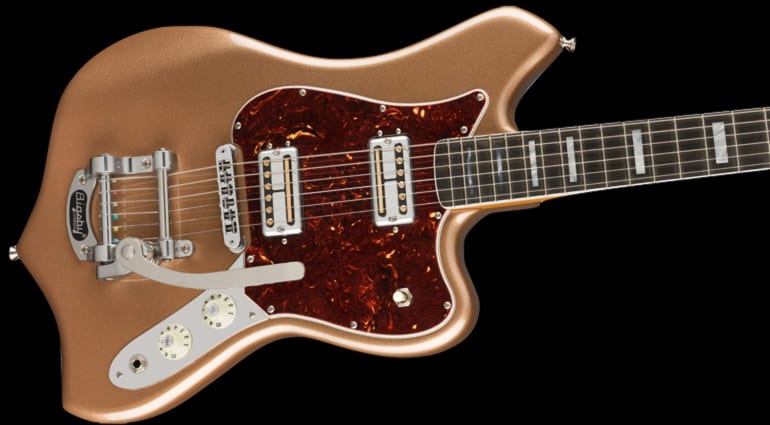 The Fender Parallel Universe Vol II Maverick Dorado was initially announced earlier this year during Winter NAMM, and has now been officially released. Read on if you’ve been wanting to get your hands on one of these unique looking guitars.

The Fender Parallel Universe Vol II Maverick Dorado is certainly an oddball looking instrument. The guitar is actually based on a vintage model that was made using leftover 12-string necks, bodies, and pickups, which is exactly what it looks like.

It has an alder body with a nitrocellulose lacquer finish, and a 12-string-style maple neck with a dark ebony fingerboard. The neck has a thick 60s C profile, 22 medium jumbo frets, and a shorter scale length of 24.75″, rather than Fender’s usual 25.5″. There’s also a Fender Adjusto-Matic bridge, paired with a Bigsby trem system.

The headstock is huge because it was originally designed to hold twelve tuners. With only six, it does look a bit odd. But that is part of the guitar’s charm for fans of the original vintage models.

The Maverick Dorado comes loaded with a pair of Tim Shaw-designed Filter’tron style humbucking pickups, with a master volume and tone control wired via a three-way toggle switch. The demo below sounds pretty decent and you get a good idea of what the instrument is capable of.

I’m not sure how I feel about it. It really is a very unusual looking guitar, although I do quite like the Mystic Pine Green finish. It also comes in a 3-Color Sunburst and Firemist Gold. The tortoiseshell pickguard works well on all three colours for me, and adds to the retro-vibe of the guitar. It’s just that headstock. I might have to put a sock over it.

These guitars are limited edition as part of the Parallel Universe Vol II series, which means there aren’t going to many of them around. So act quick if you’ve been waiting to get one since they were first announced. Personally, I think they are a bit overpriced for such oddball instruments. But if you like them, just follow the links below to grab one whilst you can. 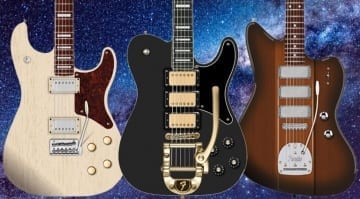