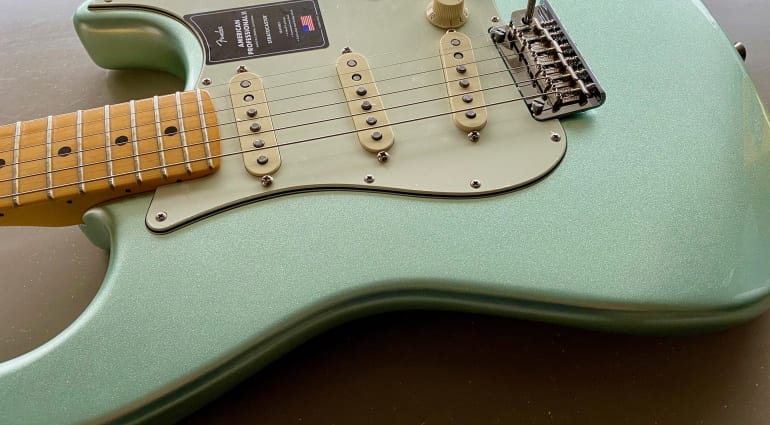 After weeks of rumours and speculation, Fender today officially launched its American Professional II range. This series updates all those classic Fender models, with some interesting updated hardware and design choices. Fender sent us one of its flagship models ahead of the official release – here are my first impressions of the new American Professional II Stratocaster model!

Fender was kind enough to send me the new Fender American Professional II Stratocaster in Mystic Surf Green. My first guitars were all Strats and this model is a bit like coming home for me.

Picking the guitar up out of its hard case I was surprised by the low weight, at around 7.1 lbs /3.48 kg on my kitchen scales. It also feels well balanced. If you like a light- or medium-weight guitar you will appreciate this.

Now, about that finish. Colours are always very personal. I am not a huge fan of the Mystic Surf Green on this model, though I can see lots of players loving it. It reminded me of the 1970s bath salts my grandmother used, very metallic and sparkly. But compared to mid-90s US Strats with caked-on finishes I’ve owned, the paint has been applied thinly, which is nice. 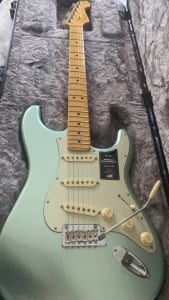 The Stratocaster American Pro II in its case

The guitar came from the factory with a set of Fender’s 9 gauge strings. For my personal playing style, I prefer a heavier gauge. The action was also very low on this particular guitar, different to my preferred setup for a Strat. It’s still eminently playable, but big bends can choke out higher up the neck and there was some noticeable string-on-fret buzz. If it were my guitar I would raise the action a little, so that I could really dig in.

Another thing I noted was that the trem arm is pretty sensitive and needs a light touch. The two-point trem system is set floating from the factory and stayed in tune really well. I did experience some trem ‘warble’ while playing, meaning the strings flutter just enough to be annoying when not using the trem bar. It’s a known side-affect of many floating trem systems and this particular Strat showed that trait, probably due to the ‘light’ setup. If you go up a string gauge and add some height to the action this issue should be less perceivable, especially through an amp. 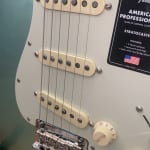 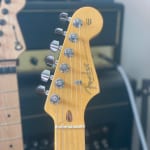 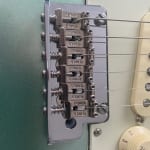 The Neck: A stand-out highlight

The hardware differences to the first series are subtle. Along with a new string tree and strap button, Fender has added the cold-rolled steel block I mentioned earlier, a contoured heel around the back for better playability, and changed the neck finish.

The 22 tall narrow frets were smooth, though the fret ends are covered in urethane finish. Could that chip off over time and cause issues? A lot of old ’70s Fender guitars had finish applied over the frets that flaked off after a few years. I would have preferred clean fret ends, but the fretboard edges are nicely rolled and comfortable to play.

Using callipers, I measured 43.3 mm wide at the nut, with a depth of 20.1mm at the 1st fret and 23.2mm at the 12th fret. So it get gradually gets thicker the higher up you go, which suits me fine. The neck on this Strat is streets ahead of those anaemic C profile Strats that Fender was knocking out for years. For me, it is the highlight on this guitar. 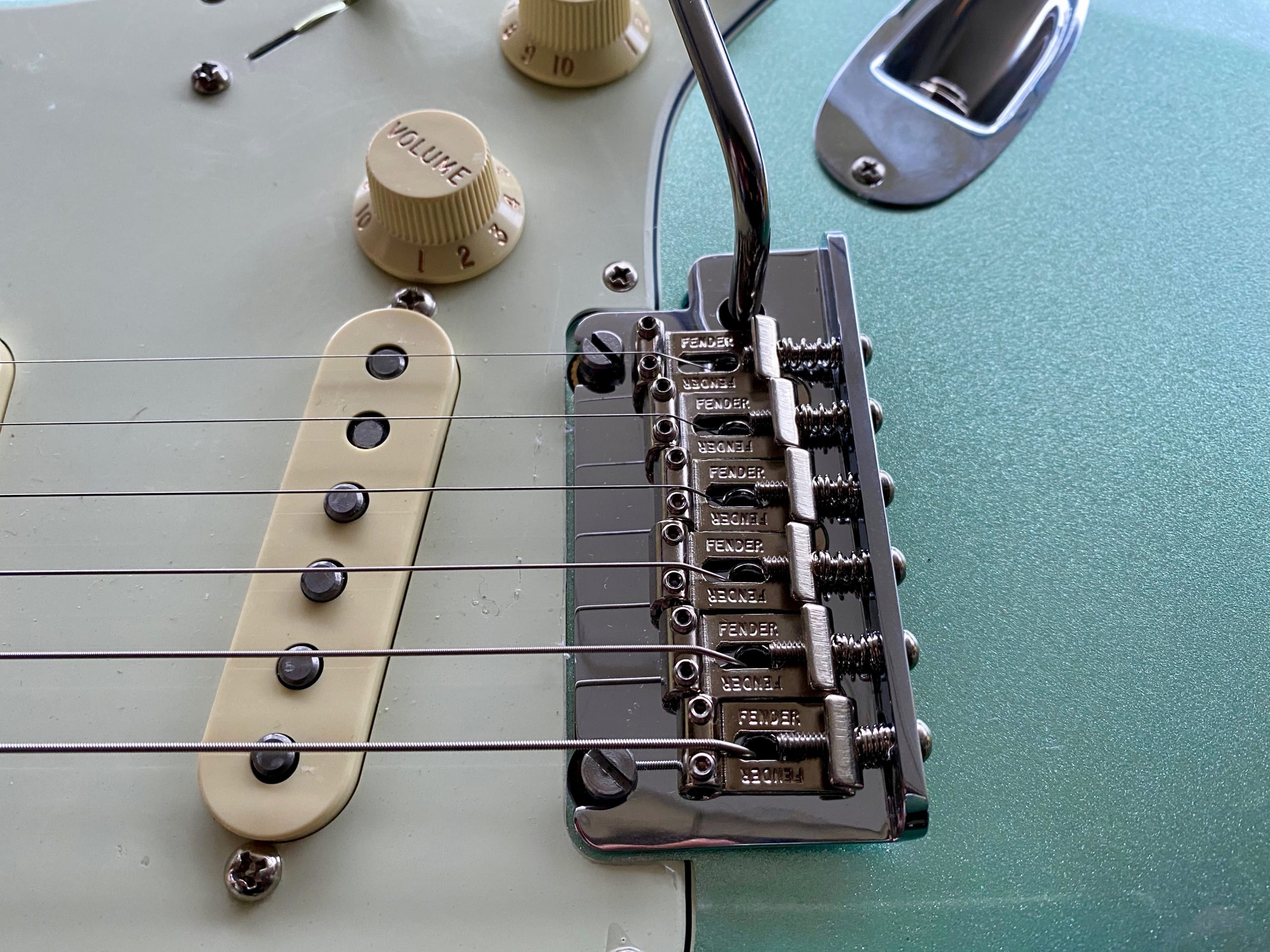 The guitar came with three Fender V-Mod II single-coil pickups wired via a standard 5-way switch and a push/push on the bottom tone control, which engages the neck pickup. The V-Mod II pickups are basically various blends of the Alnico formula, with each pickup compensated to suit its position. They were well-balanced and a lot more vintage-voiced than I had expected. Lots of classic Strat tones here. It does sound a bit, well, thinner compared to my other Strats, but it still unmistakably sounds like a genuine Strat.

For this review, I mainly used my Friedman Pink Taco, but I also dabbled with the new NI Guitar Rig PRO 6 software. I could not get a bad sound out of this guitar, no matter how I tried. It does all those classic sounds we know, adore and expect from a Strat. The voicing on this guitar is a little on the brighter end of the scale compared to my own Strats, but that’s because I tend to go for a slightly darker tone anyway. And if you feel the tone needs a bit more weight, guess what, most amps have an EQ. Use it.

The neck is surely the star of the show here. It’s a good size, plays smooth as silk, and the upper fret access is certainly aided by that contoured heel. The V-Mod II pickups can get you where you want tonally. And having the ability to add the neck pickup into the mix is very useful, though that push/push pot sits a little proud for my tastes. The two-point trem system is smooth and the tuning stability is solid. Just keep that bone nut clean and lubed and life will be good.

Would this be the Stratocaster I would choose off the rack? Probably not. It’s a little too thin-sounding for me and I’m not a big fan of that two-point trem system, which felt a bit ‘zingy’. I experienced a bit of play when using the pop-in trem arm, which bugged me. For modern, non-locking floating trem systems, PRS has it down. The setup on this Fender was too lightweight to the touch for me personally, but players looking for a lighter setup will feel right at home.

Pound for pound, this is a well-built guitar. But I don’t think any of those new features it will set the world on fire. This model will no doubt be a good buy for a gigging musician that needs a more modern floating trem system, classic looks and all those standard Strat tones.

Overall, the classic Strat DNA is all there, but the changes to the recipe don’t feel crucial or revolutionary. The American Pro II Stratocaster has some nice incremental enhancements, but I would be hard pushed to say that Fender has significantly bettered the original design with this model.

This article contains affiliate links and/or widgets. If you use them to buy a product through our affiliate partner, we receive a small commission that supports what we do, but you pay the same price you would have anyway. 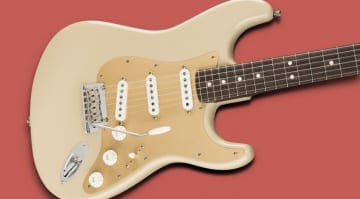