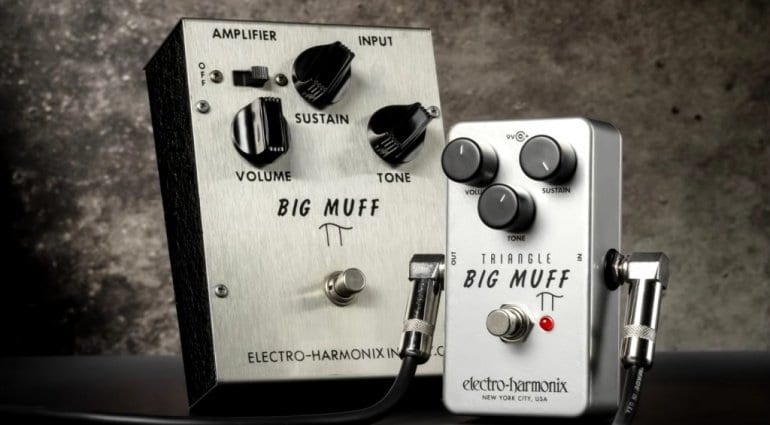 Electro-Harmonix has just announced a reissue of the original 1969 Triangle Big Muff Pi. This new modern edition is more pedalboard-friendly and EH says it’s a “faithful recreation of the original circuit”.

Designed by Mike Matthews and built in New York, USA the original Electro-Harmonix Triangle Big Muff circuit is possibly the most famous fuzz pedal. If you’re a fan of the Big Muff, then this release will be a big deal. If you’re not, you still can’t argue with the legacies of its users, including David Gilmour of Pink Floyd, J Mascis of Dinosaur Jr, Billy Corgan of Smashing Pumpkins and many more.

This kind of tone can get a little lost in a mix, but when used correctly these pedals are a thing of beauty. Think Gilmour’s lead guitar tone on many Pink Floyd recordings as an example of the violin-like quality you can achieve using a Big Muff.

Electro-Harmonix has removed the original’s somewhat useless Volume off switch, sticking instead to the three Volume, Tone and Sustain controls that everyone actually uses. They’re really all you need and if you aren’t sure how to use them to your advantage, then just watch the official demo video below.

I love Big Muffs and so will probably be picking one of these up. I have a fuzz pedal addiction that knows no bounds. After 50 years, the Big Muff circuit is still loved and argued about by guitarists all over the planet. And for good reason, as it has appeared on countless recordings we all love.