Electro Harmonix has just added a video on YouTube for its new Oceans 11 reverb pedal, and yes, it has eleven different reverbs all in one pedal.

With 11 reverbs, I guess the new Electro Harmonix Oceans 11 pedal contains enough algorithms to keep most players busy. They’ve evidently managed to squeeze them all into a relatively compact pedal. With just four control knobs labelled FX Level, Tone and Time, plus an 11 position rotary dial to choose your reverb type, I think the layout is just right: simple, yet effective. You can choose between, Hall, Spring, Plate, Revrs, Echo, Trem, Mod, Dyna, Auto-Inf, Shim and Poly settings using the later dial.

I’ve included the official EHX description below, so you can see what is included in the Oceans 11 lineup of reverb algorithms.

1. HALL – the rich reverberant sound of a grand concert hall
2. SPRING – pays homage to the classic Fender® 6G15 tube spring reverb
3. PLATE – the lush, warm reverb that got its name because a large metal plate was originally used to create it
4. REVRS – emulates the quirky reverse reverb effect where a note’s reverb fades-in backwards. (Jimmy Page claims to have invented it.)
5. ECHO –sends a recirculating echo thru the Plate reverb. The crisp clear delays get tastefully smudged by the airy plate reverb
6. TREM – reverb plus tremolo that’s applied to both the wet and dry mix of a Hall reverb, your choice of three different tremolo shapes
7. MOD – modulated reverb, three modes. Chorus laced onto the reverb tails creates a luscious atmospheric effect. Flanger wraps around the reverb tails and weaves a hypnotic tapestry. Chorus and flanger combined.
8. DYNA – Swell, gate and duck. Swell silences your notes’ attacks before blooming the tails back into the soundscape. Gate passes the reverb tail thru a noise gate that opens when it detects playing. (Phil Collins popularized the technique by applying it to drums.) Duck compresses the reverb tail while you’re playing and fades it back in when you’re resting.
9. AUTO-INF – Auto-infinite reverb that triggers a reverb wash for each note or chord. When a new one is struck, the previously resounding reverb crossfades to the new one
10. SHIM – Shimmer generates a rich octave-shifted reverb wash that modulates and blossoms behind your signal
11. POLY – Polyphonic reverb, two configurable bi-directional pitch shifts operating on your pre-reverb signal. Combine dissonant intervals with near infinite decays to create disorienting soundtracks, or choose perfect/major intervals to generate creative harmonies when jumping around a key signature

The Oceans 11 also contains a few hidden features via the ‘Secondary Knob Mode‘ and also an internal Tails switch. Even though it looks simple on the outside, you can still tinker with these added parameter controls. Then, of course, you get the Modes switch which allows you to choose between three variations of each reverb type. So this pedal looks like it has a lot to offer.

But there’s more. Check out the Infinite Jack input on the side: just plug in an external momentary footswitch to this ¼” jack plug. Press and hold the switch to activate infinite reverb, that will go on until you release it. Nice!

I’ve included the official demo video below, along with a handy link to the product page and also a really useful Bill Ruppert settings PDF guide as well. The Oceans 11 comes with the EHX 9.6DC200mA power supply included in the price. 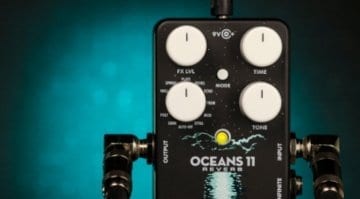 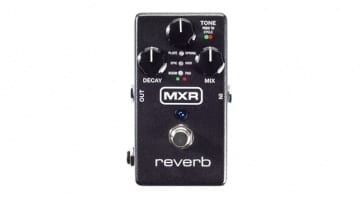 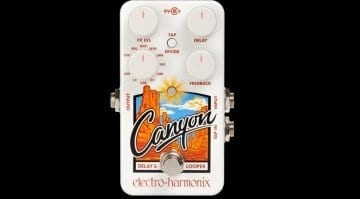 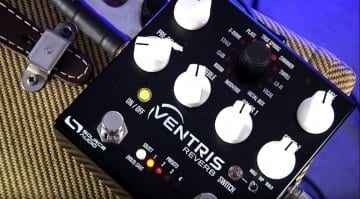 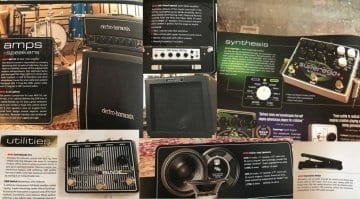 2 responses to “Electro Harmonix Oceans 11 Reverb: 11 reverbs in one pedal – and Infinity Jack”

So does the infinity function hold the note for “infinity” like the Electro-Harmonics Freeze Pedal?

the ehx freeze hold a single note while the 11 makes a small reverb loop.