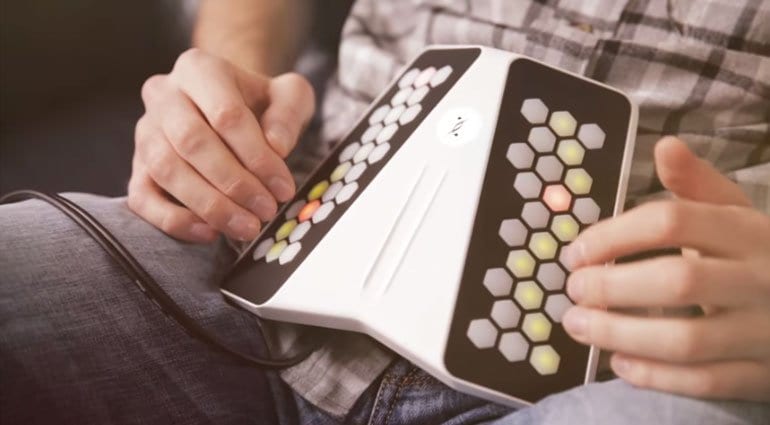 Here’s another Kickstarter opportunity for a new instrument from a bouncy bunch of French musicians and developers. The du-touch S is a simpler version of their original du-touch which will hopefully be a lot cheaper than the EUR €990 the original goes for. The Kickstarter doesn’t start until the 12th April so pricing details are not yet available – and neither are any other details for that matter.

There’s a very quirky and fun video (below) that demonstrates the product beautifully. It’s also hilarious in places where initially I thought this was going to be some kind of musical codpiece. Thankfully no, although I can’t quite get that idea out of my head as the device does appear to sit on your lap in quite a suggestive manner and pleads you to “du-touch” – or maybe that’s just me. So what does it do? Well it’s an instrument with a built in synth and looper style sequencer that can be run on batteries. It has a button accordion style finger board that lights up and can be edited and configured on a computer. In the video a bloke appears to drop a sample onto one of the buttons so that must be possible too. It also has this neat idea where it can teach you to play by lighting up the buttons to press in sequence.

There’s currently no information on what it lacks from the original, it does seem to have at least one controller strip – does it have the 3 axis gyro, touchable slider and additional buttons? Who knows. It certainly looks like a lot of fun and the idea of passing it around to create tunes is pretty groovy, especially if you’re young, French and quirky.

For more information on the original du-touch and to sign up to be notified about the Kickstarter go here: https://dualo.org/

19 Jan · i have to say, i actually like the design with it’s spacecraft console look and the 2 throttle levers in particular. Just add 2 of the new giant Doepfer joysticks and 8 faders for envelopes and...