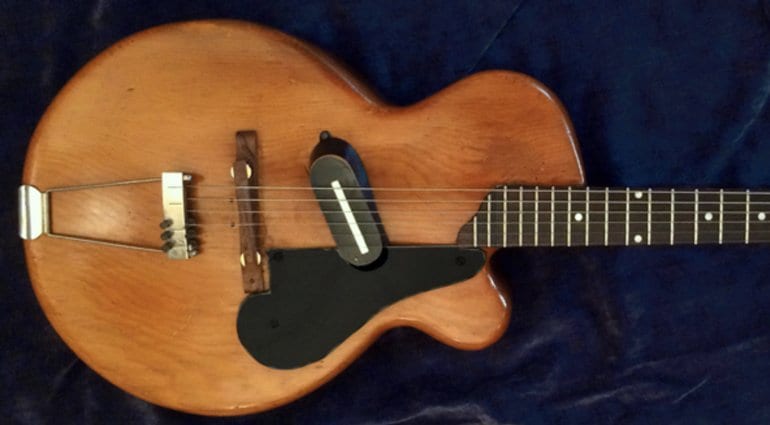 Did Gibson steal the Les Paul design? Well, it certainly looks as though they were influenced by O W Appleton and his original guitar design from 1943, 9 whole years before the Les Paul came to market in 1952.

Well, allegedly the little-known luthier named O.W. Appleton claimed that in 1943 he brought a solid body, single cutaway, electric Spanish style guitar he had made to show Gibson Guitars to try and get them interested in making it. Gibson said it would never take off and told him they were not interested in Appleton’s design.

Appleton had actually designed the guitar back in 1941 and had  attempted to patent his instrument, but as a musician from the small town of Burlington, Iowa, he didn’t have access to a patent attorney.

“Well, App, you see our competition [Fender] has finally forced us to come out with your solid guitar. Sure wish we had listened to you back in 1943.” 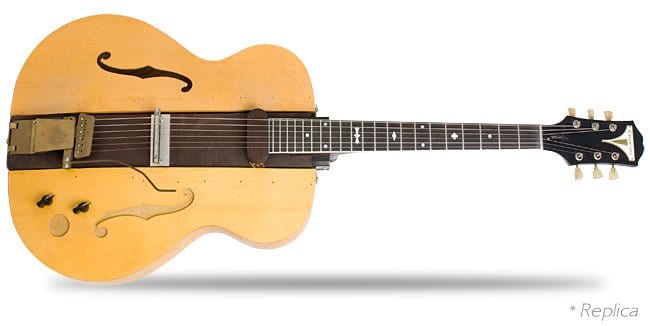 Then in 1952 Gibson releases the Les Paul solid body model in conjunction with Les Paul and using input from the guitarist/inventor, based around his infamous The Log prototype. Les Paul’s Log was built using a solid centre and used both Gibson and Epiphone parts, priced together in the Epiphone New York factory back in 1940 and went on to become the Gibson Les Paul model in  1952.

Ted McCarty and his team at Gibson were the people behind the Les Paul design, with some input from Les Paul himself, but you can obviously draw a line from O W Appleton’s original model that he showed Gibson back in 1943.

So if Gibson is now trying to get us all to Play Authentic and taking smaller guitar builders, like Dean to court over their alleged trademarks.  The fact that they ‘borrowed’ a lot of their Les Paul design from Mr Appleton will make a lot of people think twice about how authentic Gibson’s designs really are.

You can read more about O W Appleton below by following the link to the family’s website and I would also advise that you watch the The Guitologist YouTube video below as well.

12 responses to “Did Gibson steal the Les Paul design?”

Les Paul supposedly received a custom guitar from Bigsby, years before the Les Paul Gibson model came out in 52. He denies it, because it looked like a Les Paul. Yes. Gibson stole the design. Look into the Bigsby guitars of the late 40s.

I hear Gibson lost their case (unknown for sure but I believe it’s the same thing suing for design use by others) in Europe.

Don’t buy into this clickbait BS.

The only similarities between the two models were a generic single cutaway design (which looks suspiciously like a shrunken down Super 400P, which had been in Gibson’s lineup for sometime anyway), the headstock design, and a trapeze bridge. The OW Appleton App that is being referenced was designed to be a prototype solid body to be given to Gibson so of course he designed it to look like a Gibson. He even got the neck for his prototype from Gibson. He wanted it to fit into their current lineup.

If you want to know where the actual body shape for the Les Paul came from, there are prototypes and diagrams that prove that the idea came from an ES-140 that had been shrunken down as to be better suited for a solid body shape. It had nothing to do with Appleton’s design.

Stop this Gibson bashing nonsense from spreading any further. Yes, there are reasons not to like Gibson, but copying OW Appleton is not one of them.

Spot on. As I mentioned in another comment here, this actually proves that the Gibson bashing of the past few years had nothing to do with Gibson’s quality or lack thereof, and everything with an agenda of bashing Gibson for the sake of it.

History is often written by those who won. Luckily for us the information about many things once thought of as forgotten is now available via new sources. The question posed is “Did Gibson steal the Les Paul design?” and not “Gibson stole the Les Paul design”. The article is based upon a video that is currently very popular on YouTube, as we are a site based purely on news and this is currently a very hot topic.

Look, I can play your game, too, Jef:

Because that’s precisely the title and sub-title of this article, and not, like you now claim, “a question posed”. What you wrote in the article’s sub-title is not a question, it’s allegation of criminal conduct by Gibson, and in this article you’re being judge and jury on this case.

If that’s news, then you’re the most dirty journalist ever. That, of course, is also “a question posed”.

It is the original title of the YouTube video, which is what this article is based on. But with the word ‘design’ added to the end. So it makes sense.

just to get that straight:
so somebody builds a prototype for a company to massproduce it, they don’t buy/follow up on it, and then they produce a similarly shaped model sometimes later, but the title is clickbait???

Kudos for sharing this fact. Gibson really has lost my respect with this, and with their current “play authentic” BS and all their legal wrangling.

Gibson, and Fender are great guitars, no doubt. Both are just way overpriced. Fender especially. I’m not sure if it’s due to the woods used, or the name. I’ve played both of the above guitars. My Ibanez 2350 custom plays just as well as a LP. Right down to the wires used (circa 1970) it is a reverse engineered LP. I paid $200 in 1979, used. It’s a 1976 model 2350. Only the headstock looks different.