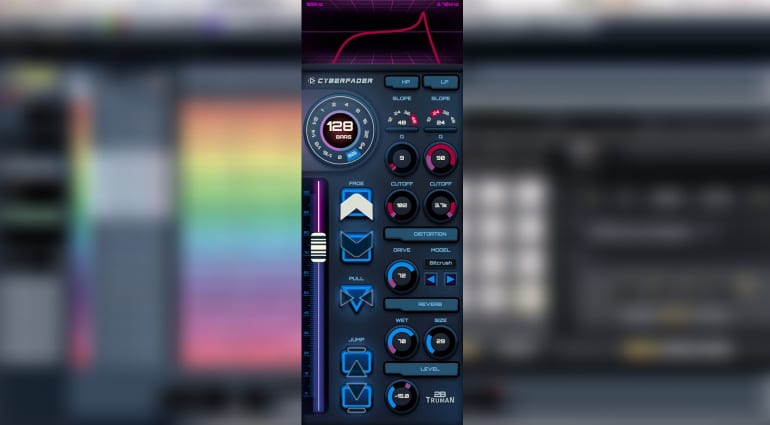 Coming from the maker of the Genesis music workstation prototype is a plug-in called Cyberfader. It’s a channel strip with several effects that seem particularly handy for performance and automation. It also looks like it shipped with Cubase in 2005, which is an adorable aesthetic throwback.

Styled as a Star Trek channel strip, Cyberfader has 5 processors at your disposal. The Fader Robot allows for DJ-like fades in your DAW. You can set a fade duration (up to 128 bars) and trigger it with Fade In/Out commands, or make momentary fades with the Pull command. It all happens in sync with the project tempo. Of course, you can drag the fader manually as well, which changes the sonic character.

Next are the High Pass and Low Pass filters. They are wired to the fader and sweep together with its movements. Each filter has Cutoff, Resonance, and Slope parameters. Slopes go as high as 48dB / Octave, which is some powerful stuff.

The Distortion module comes in six flavors: Crush, Bitcrush, Warm, Soft, Harsh, and Fuzz. A knob lets you dial in the amount of sauce you want. Then comes the Reverb, which adds a sense of space and depth while fading. It uses the fader to “move” the sound farther or closer in the mix. Finally, the Target Level section lets you fade to a specific volume level – from silence to +12dB. This way, you can bring out the effects instead of fading to silence.

I can see fans of automated transitions and effects put Cyberfader to good use. You can also make dope mixtapes and sets in your DAW with it.

Cyberfader costs USD 39 and is available in AU and VST3 formats for 64-bit Windows and Mac computers. Pro Tools AAX compatibility is “coming soon”. The download includes 175 presets in 5 categories.