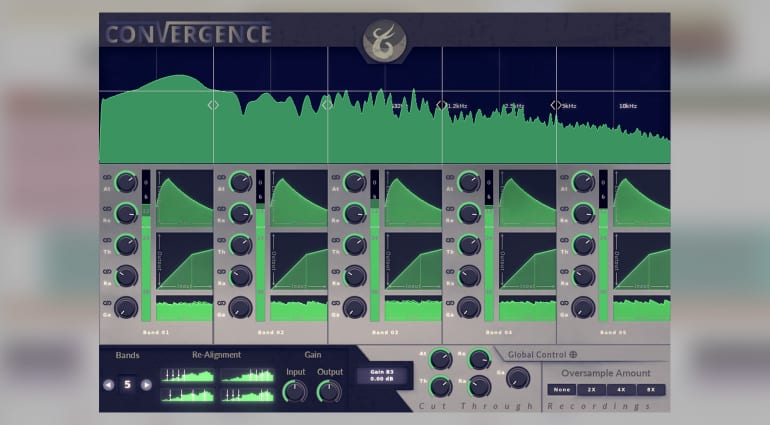 Cut Through Recordings has released Convergence. The multi-band compressor plug-in offers flexible configurations with up to 10 bands of compression, which makes it a surgical tool for mixing and mastering. Convergence is surprisingly inexpensive, and there’s even a free version with up to four bands.

Convergence can be set to anything from two to ten bands with adjustable crossovers. I don’t know how often you’d really need the precision of 10-band compression in practice, but this plug-in lets you do it. Each band has the essential controls for ratio, threshold, attack, release and makeup gain.

There’s also a set of global controls: input and output gain, and global ratio, threshold, attack, release and makeup knobs. Using the global compression parameters, you can adjust multiple bands simultaneously. Each band can be disconnected from the global controls individually.

I find the modern-looking GUI to be clearly laid out and quite informative. Each band offers a level and gain reduction meter, as well as compression curve and envelope visualizers. There’s also a moving timeline display of output versus input for each band, which lets you monitor compression over time. The large frequency analyzer helps to adjust the crossovers.

Free version with up to four bands

Instead of a discounted intro price, Cut Through Recordings offers a slimmed-down version of Convergence completely free of charge. The free version has up to four bands, which is still enough for many applications of multi-band compression. You’ll also have to make do without the compression displays, and the free version only offers up to 2x oversampling, compared to up to 8x in the full version. As far as I’m concerned, it’s probably still one of the most comprehensive free multi-band compressors, despite these limitations.

At USD 45, even the full version of Convergence is quite inexpensive compared to many other plug-ins with similar capabilities. This means that if you like the freebie (which also serves as a demo version), you won’t have to break the bank to upgrade to the full version.

The plug-in runs on macOS, Windows and Linux in VST, VST3, AU, LV2 and AAX formats.

You can find many more free plug-ins in our archives.