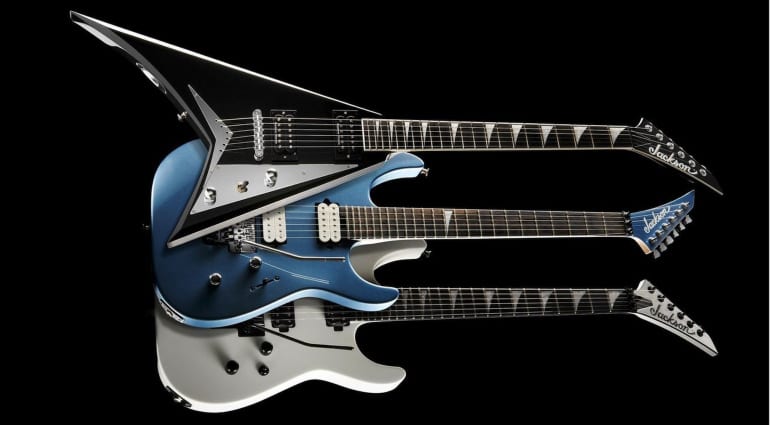 The new Jackson MJ Series should make the hearts of all shredders beat faster, but somehow I think it has missed the mark. The variety isn’t the best and there are a few glaring omissions. These made-in-Japan instruments come fitted with DiMarzio and Seymour Duncan pickups.

The new MJ Series is based on the early 1990s Jackson guitars that were manufactured in Japan. These new models are also all made in Japan and combine high-performance instruments with great hardware, plus DiMarzio and Seymour Duncan pickups.

Developed for fast, virtuoso playing, the series includes a new Rhoads RRT model, two Soloist models and six new Dinky models. What they all have in common are multi-piece necks, ebony fretboards with a modern 12′′-16′′ compound radius, jumbo frets and glow-in-the-dark Luminlay side dots.

The Rhoads RRT is available in a Gloss Black finish with a pointed headstock, Pearloid Sharkfin inlays, a chrome-plated pickguard and chrome-plated hardware, which includes an adjustable Jackson TOM-style bridge. The body is made out of alder, which is paired with a graphite–reinforced, neck-through three-piece maple neck. For pickups you get a Seymour Duncan JB SH-4 in the bridge position and a Jazz SH-2N in the neck. These are wired via a three-way toggle switch, individual pickup volume controls and a single tone control..

Why, oh why didn’t they offer this model with a locking trem system? I love the hardtail, but there should have been an option for a Floyd Rose version as well. And a Gloss Black finish? Really? Come on Jackson! Offer some colours! It’s 2021, not 1991… some colour options would have been nice here.

A missed opportunity, I think. This is why I’m not feeling this new MJ Series. And, in my opinion, it gets worse.

Let me start by saying that I love the Dinky shape and own a custom-built one myself. I just don’t think we really need six variations on the theme, with little difference between models. Once again, this is why I personally find this new MJ Series to be a bit dull.

Four new Dinky models, in a total of six different colours have been added to the new MJ series. The DKR is available in Ice Blue Metallic or Satin Black and has an alder body with a graphite-reinforced, bolt-on, five-piece maple/walnut/maple/walnut/maple neck. These come loaded with DiMarzio Super Distortion DP100 and DiMarzio PAF Pro DP151 pickups.

Out of all the six new Dinkys, my favourite is the DKR in Ice Blue Metallic, as the single 12th fret inlay makes it slightly more interesting. I just don’t think we need so many of the same model on release.

Then, with the Dinky DKRA, you get pretty much exactly the same model in Matte Black Ash, with a body made of mahogany and an ash top. This model is rocking a Seymour Duncan JBTM TB-4 in the bridge and a Jazz SH-2N in the neck position.

It may just be me, but I think the finish really cheapens the look of this guitar. And believe me, these are not cheap models. Sorry, Jackson, but I think this already looks dated and old fashioned.

The Dinky DKRP also has a mahogany body but, this time, with a highly unoriginal Poplar Burl top in Transparent Blue Burst, with light binding on the body and headstock. Pickups include a DiMarzio Super Distortion DP100 in the bridge and a DiMarzio PAF Pro DP151 in the neck.

Again, this finish has been done to death the last couple of years and I just don’t think it holds up well in 2021. I think Ibanez was doing a better version of this style of finish a few years back. And for a lot less money.

Or you can opt for the Dinky DKR MAH which comes in Gloss Black or Snow White, both classic ’90s Jackson colours that every fan of the brand should have. I really don’t feel the Poplar Burl, or the Matt Black monstrosity above. It just seems not very original.

Last but not least is the new Soloist model. This is available in Gloss Black or Snow White with matching headstock, and black hardware. You get an alder body with a graphite-reinforced through-body three-piece maple neck. Pickups are a Seymour Duncan JB SH-4 bridge humbucker and a Seymour Duncan Jazz SH-2N in the neck position, wired via a three-way toggle switch, with individual pickup volume knobs and a single tone knob.

Hardware includes 24 jumbo frets and a Gotoh GE1996T Series double-locking tremolo bridge. Again, this is a classic, but I feel it is very overpriced. And, in 2021, it has some serious competition, so it may miss the mark for many players.

Personally, I feel these finishes are a little lazy and the models themselves are very overpriced, especially in such a crowded marketplace for Super Strats. It is 2021 and the world has moved on.

What do you think of the new Jackson MJ Series? Are they on point, or has Jackson wasted an opportunity to do something spectacular? Let us know in the comments section below. 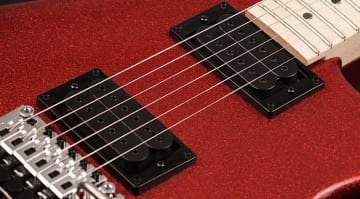 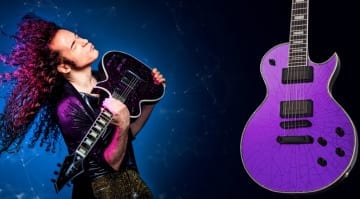 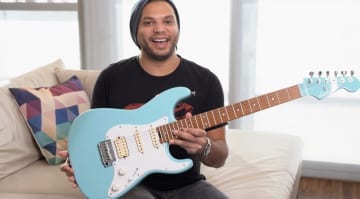 2 responses to “Could the new MJ Series be Jackson’s dullest release for a while?”