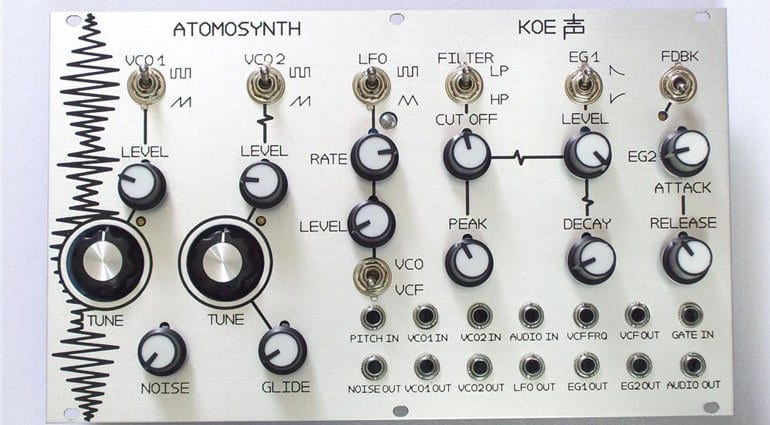 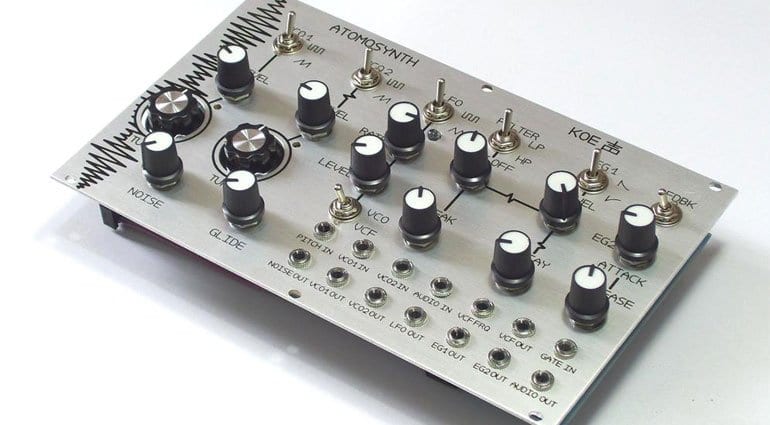 A video from the Tokyo Festival of Modular brought to my attention the Koe from Atomosynth. “Koe” is Japanese for “voice” and this 42hp Eurorack module aims to fulfil that description by being a complete synth voice for your modular system.

In terms of features and layout it appears to be a pretty standard affair. Two oscillators with square and ramped triangle waveforms, same waveforms on the LFO, two envelope generators and a high and low pass filter. But on closer inspection it there are several details that give it a lot of versatility. Firstly the oscillators can be modulated independently. They have their own VCA and outputs and so you can apply envelopes differently, you’re not just dealing with a mix of oscillators. There’s also a Noise and a Glide control over VCO 2.

In the filter department, the high a low pass filters are vactrol based which gives them an interesting sound. And you can patch in and out of the filter before the VCA and so use it independently. With the envelopes EG1 goes to the filter and EG2 goes to the VCA. Both EG’s share the same input trigger.

Other features include a Feedback Switcher which brings some of the output back into the mixer for an extra harmonic boost. And there’s an audio input that can use the filter and envelopes.

So nothing really groundbreaking but there’s some solid stuff in there. It is analogue throughout and as the man says in the video, they are not trying to emulate anything, and so it has its own sound. He makes a bit of a mess of the demo initially but if you hang around he does start to pull out some interesting sounds. I do, however, prefer the silver front plate to whatever that was in the video.

What is really nice is the price – $349! It should be available soon.

There’s plenty of sound examples on the website, but it was this video from Synthanatomy that first drew my attention to it.