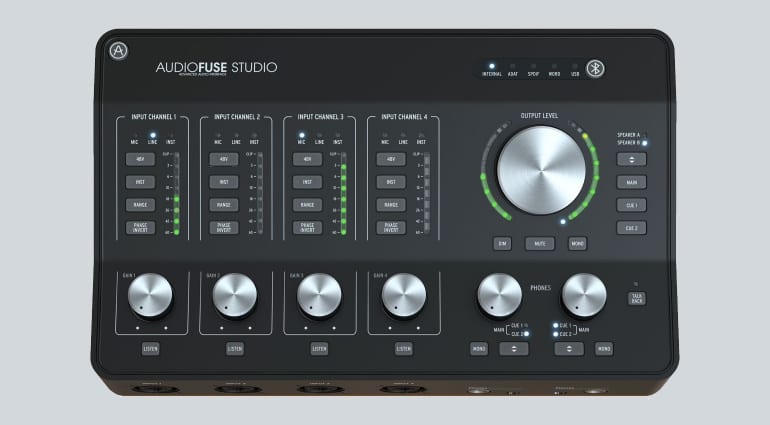 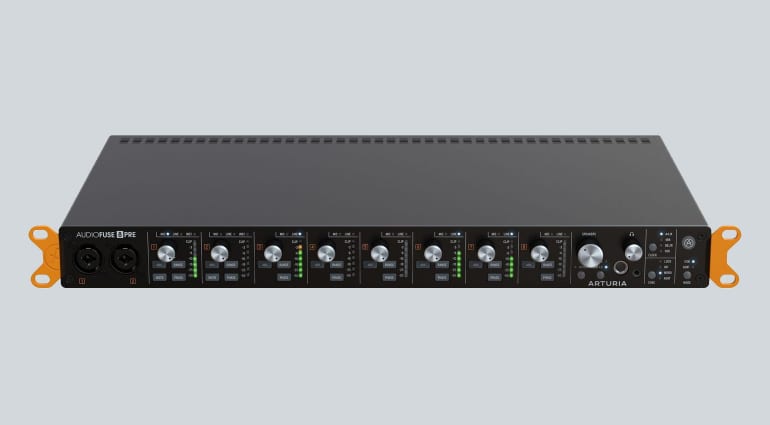 The AudioFuse Studio and AudioFuse 8Pre were announced over a year ago at NAMM 2019. While the 8Pre came out a few months ago, Arturia took a bit longer to finally bring the AudioFuse Studio to market. Both interfaces use USB-C connections and feature AD/DA converters with a maximum resolution of 192 kHz / 24 bit. They also come with a software package that includes a selection of Arturia’s effect and mixing plug-ins, as well as Analog Lab Lite.

While the AudioFuse Studio doesn’t offer as many inputs and outputs as the 8Pre, it includes an integrated monitor controller, talkback and some other features that make it a complete desktop recording solution. There are four mic/line/instrument inputs on XLR-1/4″ combo jacks on the front side, and four additional 1/4″ TRS line inputs at the back. Inputs 1-4 feature Arturia’s “Premium Discrete Pro” preamps with separate mic, line and instrument circuits and phantom power. They also have insert points for looping in external hardware devices while recording, which is a very good idea that I’d like to see on more interfaces. Two of the line inputs offer additional RCA connectors for a turntable.

The output section has dual stereo speaker outputs for two pairs of powered speakers, and an additional stereo aux output. The line outputs are DC coupled, so they can be used to supply control voltages to analogue and modular synths using software like Bitwig, CV Tools for Live, or others. Dual ADAT I/O ports let you connect external converters for up to eight additional channels at 96 kHz. There’s also word clock and S/PDIF I/O, as well as MIDI I/O. For MIDI, Arturia chose mini jacks instead of DIN connectors, which makes it easy to connect things like the Korg volca series, but has you fiddling with the included adapters for everything else.

The monitoring section looks like it could eliminate the need for a dedicated monitor controller in many smaller studios. Essential monitoring features like speaker switching, dim, mute and mono buttons, talkback and two separate cue signals are all available. There are two headphone outputs, each with its own level knob and mono button. The AudioFuse Studio also supports Bluetooth streaming, which is handy if you’d like to listen to some tunes from your phone while you’re working.

Like the original AudioFuse, the AudioFuse Studio features an integrated 3-port USB2 hub for connecting things like controllers or dongles without using up additional ports on your computer, which is yet another one of those good ideas. All in all, the concept seems well thought out and executed and I think this will be a very attractive package for many small studios.

The AudioFuse 8Pre has been available for a few months now. This rackmount interface is aimed at studios that need a maximum number of inputs, outputs, and preamps. It offers eight analogue mic/line inputs at the back with Premium Discrete Pro preamps. Inputs 1 and 2 are mirrored on the front panel and can be switched to take instrument levels. These two inputs also feature insert points.

This being a rackmount interface, the monitoring options are less sophisticated than those of the AudioFuse Studio. You get one headphone jack with a level knob, and a volume control for the speakers. For monitoring, you can choose from the main bus or a separate cue signal.

The AudioFuse 8Pre does not offer MIDI I/O, and you’ll also have to make to without the Bluetooth option and USB hub.