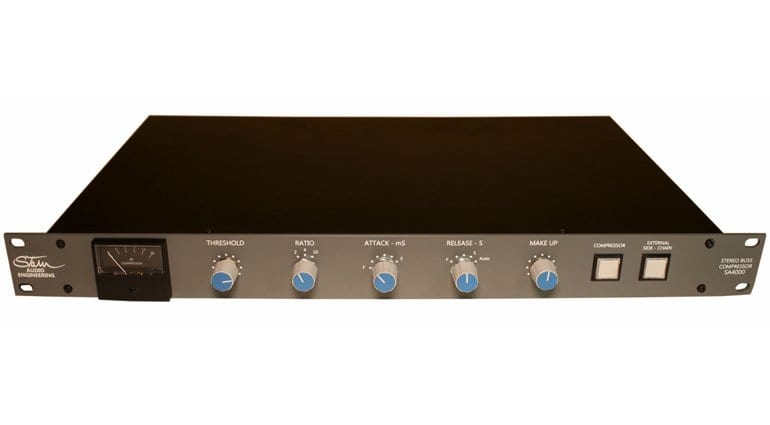 There seems to be more and more clones of famous pro audio equipment, sometimes as complete products or DIY, build-your-own kits. However, there hasn’t been too many options if you’re looking for the very famous bus compressor originally found on SSL’s G Series consoles. Apart from unique builds, I can only think of one lunchbox product and one kit. Here with their second product, Stam Audio from Chile present a new option – the SA4000.

I’m a huge fan of the Solid State Logic stereo bus compressor, often recommending the X-Rack version to studios. Described as adding ‘glue’ to your mix, the surprisingly accurate plugin emulations from manufactures such as Waves and UAD have proven very popular. Admittedly there are benefits to using plugins, such as practicality, but what if you want something even closer without breaking the bank?

Last year Stam Audio released their first product, a copy of the famous LA-2A. There hasn’t been any notable reviews or feedback, but early indications show that it is a well built and sounds great. I haven’t heard one myself, nor have I heard this new SA4000, but hopefully it won’t be too long.

Stam Audio claim the SA4000 is “true to the original G Series Desk circuit and schematic”, and that “there is no compromise in parts throughout the entire circuit which ensures you get a compressor that behaves and sounds 100% accurate to the original”. Clearly the vote is still out, but all the right intentions are there.

List price is 590 USD. There is currently an introductory offer of 459 USD for the first 100 pre-orders. Release date is expected at the end of May.