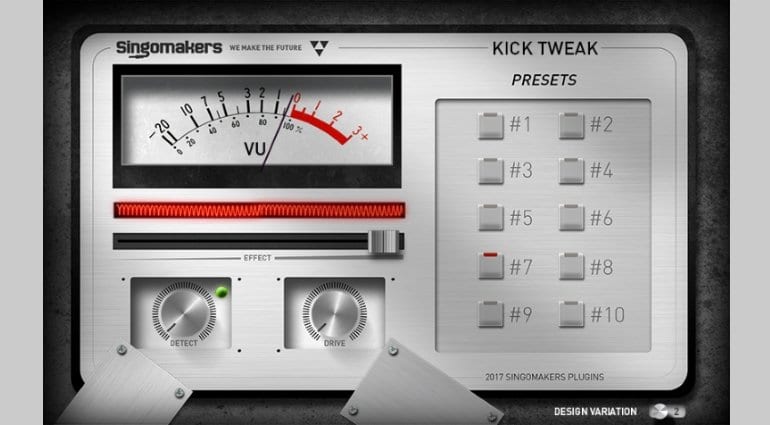 Some producers tend to spend the kind of time on their kick drum sounds that one could use to knock out an entire beat. Singomakers’ Kick Tweak is the kind of tool envisioned exactly for that type of manic obsessive looking to put down the perfect thump. Its deceptively simple and colourful interface hides an engine designed specifically, Singomakers say, for making the most out of those fundamental low frequencies.

You have little, but sufficient control over the virtual machine with Effect, Detector, and Drive knobs. The Effect knob pulls together multiple effects parameters at once, coming from a fusion of compression, saturation, distortion, and EQ. In a way, this control is manipulating a big preset, (in addition to 10 other ‘explicit’ presets available to choose from) made to service a wide range of kick drum sounds. Some like it this way, others prefer going all academic and stacking assorted plug-ins in a chain. Both perfectly valid approaches, of course!

What else is there? The Detector knob controls the signal detection threshold within presets 7 to 10, which include compression and limiting effects. Third, there’s Drive, which is also tied to presets 7 – 10 and controls the different types of distortion available, along with the amount.

We realize Singomakers wanted to keep the plug-in clean and simple, designing and pricing it for budding electronic producers. But there’s clearly lots of processing going on that’s held behind the scenes, making for plenty of untapped power. It would be great if an Advanced mode of sorts could be implemented, with access to individual effects parameters for the brave to tinker with. Then Kick Tweak could become much more than an instant gratification tool.

Still, if you like what you are seeing, head here and grab Kick Tweak by the kicks. It costs about 40 USD / 34 EUR, though it’s been discounted a fair bit for launch.