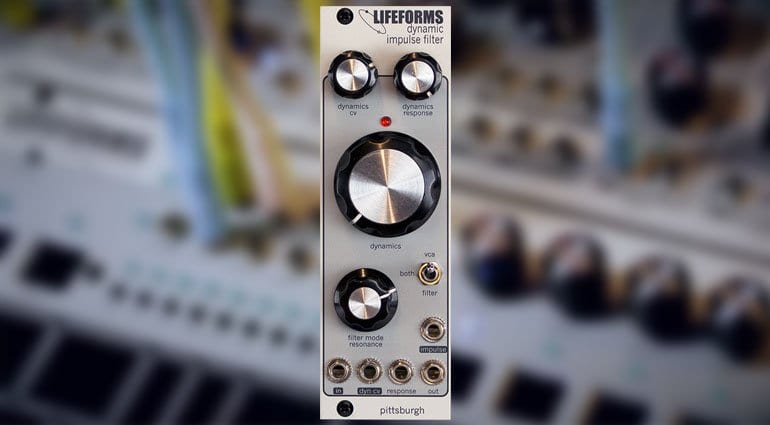 Pittsburgh Modular have released a new module in their Lifeforms series which brings the lowpass gate into the future. The Dynamic Impulse Filter retains the sonic characteristics of the lowpass gate while attempting to solve the problems that come with it.

A lowpass gate is built upon a resistive optoisolator called a vactrol. It combines an LED with a photo-sensitive cell to control a filter which is acting like a VCA. As voltage is applied the LED hots up and the photo-cell responds by opening the filter. The awesome thing is that it gives a very natural response. With a regular VCA a signal is amplified with no change to the harmonic content. With a vactrol, because of the nature of the way the LED and cell interact, sharp attack and slow decay, the loudness of the sound affects the harmonic content. The result being (if you are still with me) that you get very natural sound with percussive, struck sounds.

Suffice to say that the sound of the vactrol, as pioneered by Buchla, is enjoyed and celebrated. Pittsburgh wanted to engineer their way around the problems, the unpredictability and lack of adaptation, while retaining that desired response. That’s the plan.

So their new Lifeforms Dynamic Impulse Filter, after two years of R&D achieves this goal. The response time isn’t static like a vactrol but is instead fully tunable to adapt to any musical context. And it does this without using any vactrol circuitry.

So essentially, it’s a filter and VCA with a particularly natural sounding response that replicates the impact transients and vibrancy of percussive hits.

The Dynamic Impulse Filter Eurorack module will be available mid-December for $229. More information on the Pittsburgh Modular website.