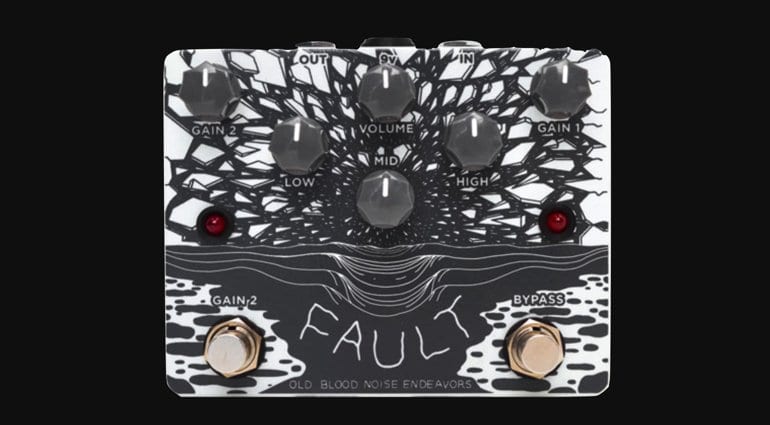 Old Blood Noise Endeavors has just announced its release of the Fault, a boutique Overdrive/Distortion pedal. The company specialises in hand-built effects and this latest in their line-up is definitely one to check out if you are looking for a versatile drive pedal.

Brady Smith and Seth McCarroll started building effects pedals in a garage, and their boutique pedal builds have since gained such popularity that they are seen on many pro players’ main boards. Their take on effects pedals is a little left of centre and because of this, they have earned themselves a bit of a cult following.

The Fault overdrive and distortion pedal features a pretty vast array of drive tones in its relatively compact footprint. It has a three-band active EQ section that boosts or cuts lows at 100Hz with mids around 500Hz and highs above 3kHz.

The Fault incorporates two gain stages, the second of which is foot-switchable into the signal path. Each stage has its own Gain knob and you get a single shared Volume control for the sum total of the Fault’s output. The pedal is, of course, true-bypass and you get a footswitch for engaging the effect as well as the aforementioned Gain 2 switch.

The Fault manages to go from a pretty modest gain in the style of the Tube Screamer through to some pretty heavy cascading distorted tones when you engage both drive circuits. Combined with the three-band active EQ section, this makes for a versatile overdrive effect that is nevertheless simple to operate.

Because both gain stages interact with each other in such an organic way, the Fault manages to be far more interesting than many other overdrive and distortion pedals on the market. I feel it adds something new to an already saturated market, and I think the price is cheap for a boutique handmade pedal as well.