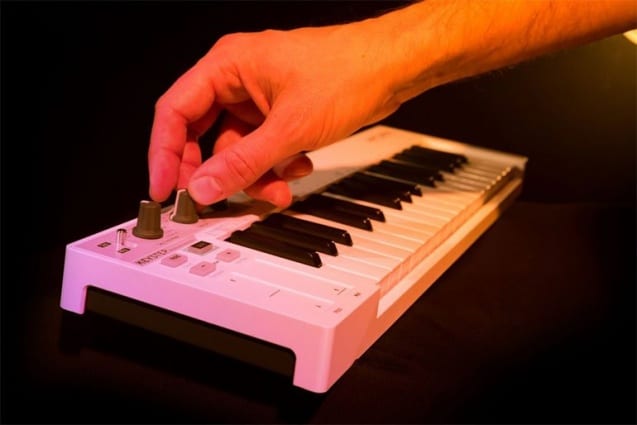 Although Arturia’s official channels appear to be silent on anything new, another press release has appeared on gearslutz.com giving details on the Arturia KeyStep. Portable, overly featured, mini controller keyboards seem to be developing as a bit of a theme at NAMM this year and the KeyStep fits right in. The KeyStep is a portable USB MIDI controller keyboard with polyphonic step sequencer and CV connectivity. The step sequencer comes with 8 memories, variable swing and gate settings, as well as real-time recording and overdub. Arp mode brings in 8 arpeggiator styles and Chord mode lets you play single note chords and arpeggiations. In the connectivity department you can plug in regular MIDI, USB MIDI, SYNC IN/OUT and CV/GATE.

There’s not a whole lot going on on the front of the controller, just a pair of ribbon controllers for pitch and modulation, a couple of knobs and transport controls. It’s unusually bare for this sort of controller. It has the look of the Arturia Spark about it.

The KeyStep should be available in the spring for 119 EUR.