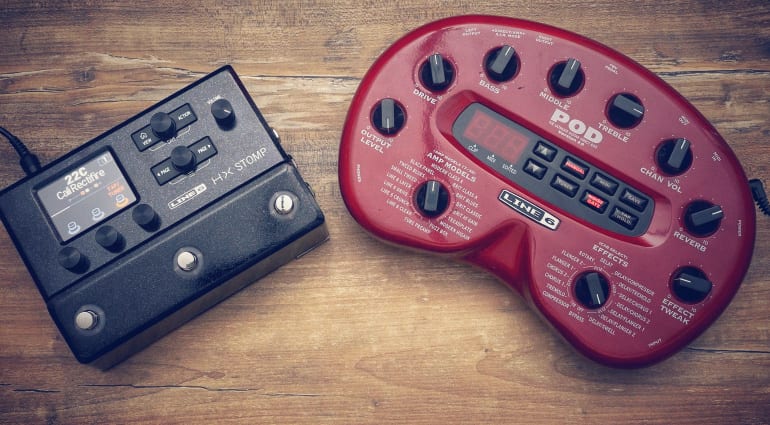 There are two decades between these two devices, each of which has triggered a mini revolution in the guitar scene. So lets see how the former king of modelling competes against the current best seller. The fight has started: Line 6 HX Stomp vs. POD 2.0!

Let’s look back for a moment and acknowledge what that little red kidney bean, the Line 6 POD, has done for us. Earlier this year we wondered, could you make it sound any better and was it now considered ‘vintage gear’?

Back in 1998 when Version 1.0 was released, it delivered an unprecedented level of authenticity with its 16 different amp simulations. Suddenly, “digital” was no longer taboo. Now, if guitarists wanted to be flexible and have all the usual timbres ready-to-go, they no longer had to spend large sums of money on different amplifiers, or lug around huge rigs.

While bass players waited enviously for the release of the Bass Pod XT in 2002, we guitarists were able to experiment with a wide variety of sounds and send them directly to tape, DAW or PA, without extensive microphone work or unpleasant volume levels. Eventually, some players completely dispensed with their heavy tube amplifiers and switched entirely over to the ‘kidney bean’.

Version 2.0 which followed in 2000, delivered twice as many amplifier models, AIR (Acoustically Integrated Recording), and offered the possibility to change the speaker simulations. When it was released, there were simply no excuses; every guitarist had to have a POD 2.0! Few sequels have sold as well worldwide!

The Line 6 Helix Stomp could be the POD 2.0 of our era . It was launched in 2018, 20 years after the original POD. This might be reason enough to see how the two devices compete against each other.  The guys at Bonedo.de thought so too and created an extensive audio comparison. And if your German isn’t so great, you can watch the video below.

Taste is subjective, and when I looked at the comments below the video, it’s clear not everyone is impressed with the high-resolution signal of the Helix. Some of the sounds did seem too crisp to me, although, I can clearly hear a much more detailed illustration of the amps. It appears to have a more 3D, rather than a 2D sound. And, as described in the conclusion, the playing feeling is also quite different:

“There is also a slight signal delay with the POD, the sound is not as direct as with the HX Stomp. So when I was recording with the POD, I always had a strange feeling and no real control over the timing, as if someone was holding my right hand. ”

Do you think the modelling has improved for the better? Who will bring the next big breakthrough, and does it matter if the sounds become more detailed?

Apart from the difference in sound, one thing I noticed particularly positively about the POD 2.0 is that it is super easy, quick and intuitive to use. This is not a point to be scoffed at, and is often one of the reasons that some guitarists convert from the Helix Stomp to, for example, a Strymon Iridium.

The technology in the field of modelling has certainly come a long way over the past few years. Nevertheless, I am convinced that it is modern impulse responses that play an important role in the success of current devices and plug-ins. Not only with the Helix, but Kemper and other modern modelling gear as well. As a rule of thumb, whenever possible, try out some different IRs with your modeller, as it can have a huge impact on your overall tone.

I still own a Line 6 POD XT, and have a Helix LT kicking around somewhere, too. I use them both, and each has its place in my recording setup.

Check out a few of the videos below to hear what players think about these products.

28 Jan · Quite a small proportion of the Eurorack community ‘I guess’ but possibly good feedback for the developers. Probably not that much of a production change to introduce a range suitable for the ...