The highly anticipated Line 6 Helix 2.5 firmware is now available, with a plethora of effects and a couple of really nice boutique amp models as well.

I’ve already listed every single feature update for this new 2.5 firmware download in last month’s article here.  The nice new delays and reverbs seem to be pretty hot, with users raving about them over on the Line 6 Helix Family User Group over on Facebook.

There is also a huge set of legacy Line 6 effects from their older M13, M9, M5, DL4, DM4, FM4 and MM4 models, again this is a fantastic inclusion for many of us, as we can now rebuild old patches from previous hardware and blend them in with modern Helix algorithms.

We are even told that they will be adding the other channels from both amps in a later update. Hopefully we’ll get that this year…

Th update process is quick and easy, it took around 10 minutes total to update my Helix LT and all you really need to do is make sure that you have backed up your existing patches before attempting the 2.5 firmware update.

Use the Helix Edit PC/Mac Application to do this vis USB first and then use the Line 6 Updater to update your Helix to the latest version, the app will find it for you and send it over as one long file to your Helix. I’ve included a shot of my one updating below for you to see. 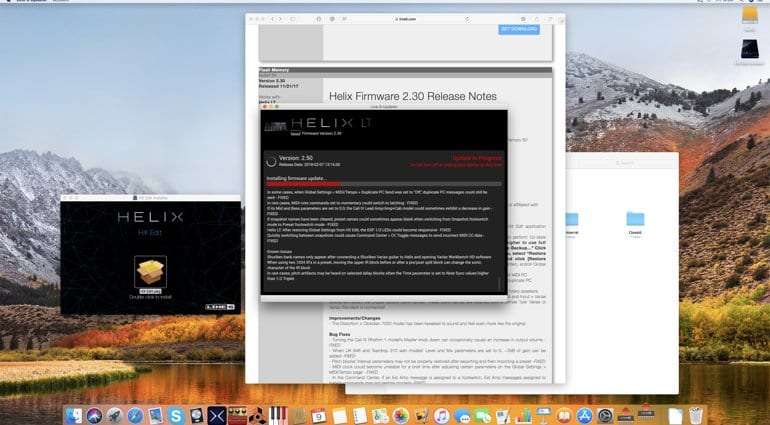 I’ve seen users reporting that they have experienced weird screen glitches during installation on their Helix, but mine didn’t do that at all and the update went very smoothly indeed.

There is also a Helix Edit 2.51 update and also an update for Helix Native 1.5 update, which again both installed perfectly on my Mac. I’ve included a demo of the Placater amp model by YouTuber Chad Huskey below, so you can check it out.

One response to “Line 6 Helix 2.5 Update now available – and it was worth the wait”