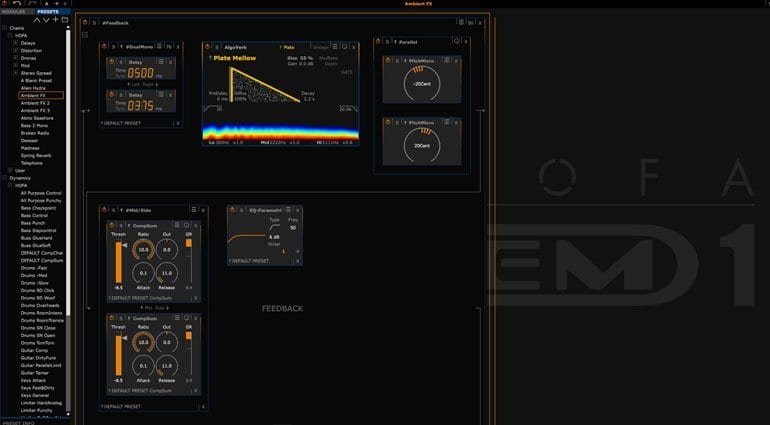 Back before Christmas Simon reported on the announcement of the HOFA SYSTEM plug-in. It seemed to really float his boat. Now it’s released and more information has emerged I wanted to fill in some detail and offer an alternative view.

Does anyone know if the “1” is important? It appears to be called “System 1” but then the website refers to it as “SYSTEM”. Maybe “SYSTEM” is a blanket term for their modular system plug-in and this is the first version of it? Who knows, probably not important, what we do know is that it has to be capitalised.

Anyway, HOFA SYSTEM is a plug-in that provides an environment into which you can build your own effects processor. There are 20 modules to choose from and you can arrange and route them however you wish. You want to create a multi-band compressor? Sure, then drop in a bunch of compressor modules and arrange the bands accordingly. For a bit of EQ you can build a parametric with up to 11 filter bands. Or if multi-effects is your thing then you can fill your boots combining whatever sonic processes you want to apply to your audio.

There’s everything you’d expect from a mixing and multi-effects processor: EQ, compression, reverb, delay, harmonics, distortion, expanders and gates. They can be configured in mono, stereo, multiband, mid/side, parallel and dual-mono. When you boil it down the HOFA SYSTEM offers a premium reverb called AlgoVerb, a very configurable channel strip and a couple of effects. Not quite the “impressive” rosta of modules you’d think. It’s in the flexibility of the environment that it can get interesting. Check out the video below for some examples. It starts off a bit dull but gets more interesting towards the end.

The ability to patch different process modules together and in different configurations is an outboard tinkerers dream. The GUI has the look and feel of the devices in Ableton Live or Bitwig Studio. Several DAWs do actually have this kind of functionality built in, Tracktion, FL Studio and Studio One spring to mind. So perhaps SYSTEM is more innovative in the more straight-forward insert chains of something like Pro Tools.

HOFA make a lot of noise about the included AlgoVerb reverb. They call it a “postmodern premium reverb plug-in”. It’s been developed through careful analysis of lots of classic and modern reverbs. Some of the features include an embedded chorus to provide thickening; downsampling for a vintage mode; decay multipliers; gating and an intensity dial on the early reflections. AlgoVerb definitely appears to be a highlight of SYSTEM but perhaps inadvertently makes the other modules look rather mundane.

There’s no doubt that there’s some complex possibilities on offer here. The debate is really whether you want to spend time designing and developing your own signal chains or simply drop in the plug-in of your choice. The advantage of software plug-ins is in the diversity of types and sounds available, and SYSTEM 1 doesn’t really give you that much to play with. If you could incorporate third party plug-ins as modules – like you can in the similar DAW based environments I mentioned earlier – then it would widen its appeal.

HOFA stress that there’s a roadmap in place to develop at least 10 suites of further modules to expand on the possibilities. They would be extremely welcome as honestly, it feels a little sparce. There’s a lot of promise here. The basic set is very decent but perhaps a little underwhelming in the creative department. Looking forward to seeing how it develops.

HOFA SYSTEM 1 is available now for MacOS and Windows, in AU, VST, RTAS and AAX formats, for a very reasonable introductory price of €59.90. There’s also a 14-day trial available. More information over on the HOFA website. 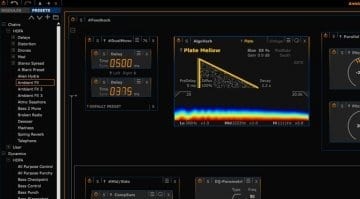 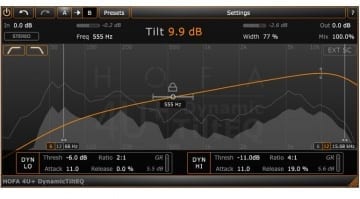