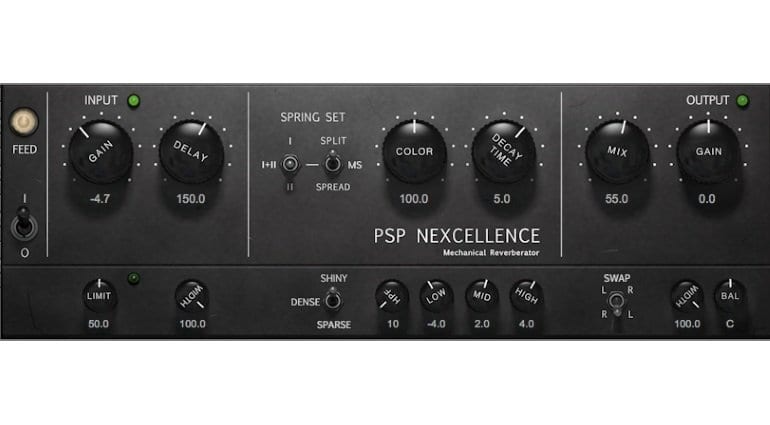 If you like a good spring reverb, head over to PSPaudioware. The Polish developer released Nexcellence, a “mechanical reverbator” plug-in that features two spring set processing engines. Both can be used independently, or simultaneously, depending on the sound you like. The goal is emulating the sound of necklace-type reverb units, which first appeared in 1959, developed by Hammond Organ company engineers. You can read a bit of history and explanation here.

Dangling springs aside, Nexcellence seems to have it all. The Controls section is split into Input, Main section, Advanced parameters, and Output. There, you will find some elaborate controls. For example, the input limiter threshold control lets you adjust the inbuilt opto-limiter, which is recreated with all electronic circuits and features of the original model. This way, the character, density, and saturation of the wet signal are under your control.

There’s also the Input Width knob, which adjusts the gain of the side signal in a MID/SIDE processing mode, setting the stereo panorama width of the input signal.

The Spring Set Selector is interesting, for it lets one switch between three modes of spring operation – first spring set (solo), both spring sets, second spring set (solo). You can further elaborate on this with the Spring Set Configuration switch, which lets the reverb work in Split, MS, and Spread modes. Split configures the first spring set to process the left audio channel and the second spring set to process the right audio channel. MS treats the stereo output signal from the spring reverb simulation as a Mid/Side stereo signal, which gets decoded into a Left/Right stereo signal at the output. Finally, Spread processes audio from both input channels using individual springs from both sets.

In addition to the variety of sound-shaping controls, PSP Nexcellence comes with a load of presets to showcase the reverb’s functionality and provide starting points for applying its particular sonic imprint.

PSP Nexcellence is available in all popular formats for PC and Mac computers. It has an introductory price of $99, down from the $149 official price tag and valid only until August 31. The plug-in is licensed via the iLok License Manager and does not require a hardware dongle. A fully-functional 30-day demo version is available as well.