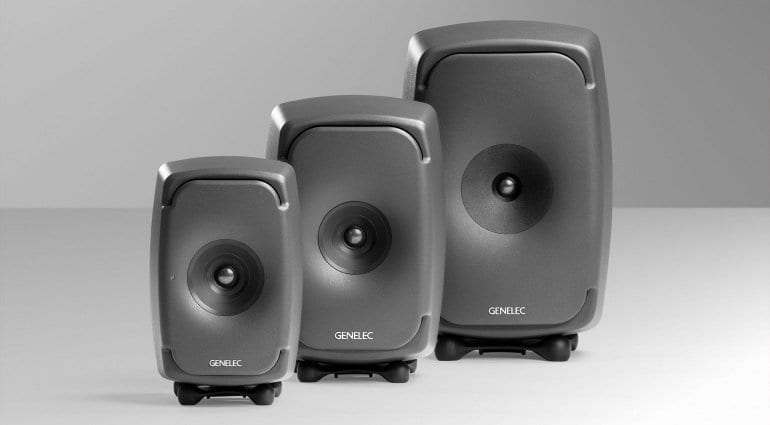 When the flagship 8351’s were released by Genelec, they caused quite a stir, primarily due to their unusual look. Not only was the bass driver covered, but the dual LF drivers were oval. Over the last couple of years since their release, they’ve also caused quite a stir thanks to their sonic performance. Genelec are so confident in these technologies that they’ve announced two smaller models, calling the range nothing less than ‘The Ones”, billed as “the world’s most compact coaxials”.

A very good friend of mine who is an exceptional engineer bought a pair of the 8351’s almost as soon as they were announced. He’s been achieving some exceptional results mixing with them and is really content with his purchase. It was partly his experience that lead me back to Genelec myself.

The talking point, of course, is that these are three-way coaxial monitors for a true point-source listening experience. This has always been considered a theoretical goal for speaker manufacturers, but reality presents many design complications. Genelec have combatted these challenges with some unusual technology, but time has passed and the 8351’s have certainly proved themselves.

In a slightly unexpected move, Genelec have managed applied these same design principles into two smaller models, the 8331 and 8341. ‘The Ones’ look great and make a lot of sense for those mixing in slightly smaller than ideal spaces. There isn’t always room for a subwoofer, or quite simply the low end of the frequency spectrum is where problems for small spaces typically harbour. These point-source coaxial speakers should be well suited to these environments. I’m interested to see if the smallest model, the 8331, holds enough weight, but my expectations are that it will.

Along with the rare design concepts, aimed at offering “absolutely neutral reproduction”, Genelec also seem very proud of their DSP technology. As with all their latest ‘SAM’-enabled monitors, these models have built-in DSP that can measure a listening environment and calibrate accordingly. This is done with Genelec’s GLM software, which I can personally vouch for. No other speaker manufacturer currently offers calibration on this level, straight out the box.

Pricing and availability haven’t been announced yet. The flagship 8351 model from this range is already available of course, and retails for around 2,500 GBP per unit. Head over to the Genelec website for more information and product details.

This is a promo video worth watching just for fun. There’s no information here to speak of, or explanations of their new technologies, but this certainly wins the prize for the most creative and cinematic promo video we’ve seen! As seen on YouTube from the Genelec Official Channel.