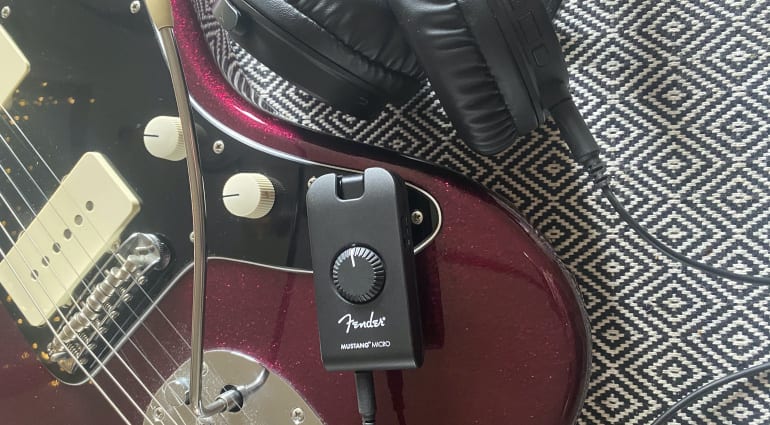 Fender just launched the Mustang Micro headphone amplifier to carve itself out a slice of the micro amp market. The Mustang Micro is designed to make playing and practising your guitar simple, fun and something you can do just about anywhere. I took this little tone mosnter for a spin; here are my impressions and what I think it could do for your guitar playing.

Fender kindly sent me out the new Mustang Micro to try out. This little headphone amp has been with me for a couple of weeks, enough time to get a clear idea of its strengths. The setup is super simple. You charge up the unit using the included USB C to standard USB cable, by using a regular USB charger (not included). Then you plug the Mustang Micro straight into your guitar’s output jack and plug in your favourite set of wired headphones. That’s it: super simple, no messing around with annoying apps, menus or software add ons. It’s literally just plug in and go.

You should get around 4 hours of playing time from a single charge, so plenty of time for you to get playing. 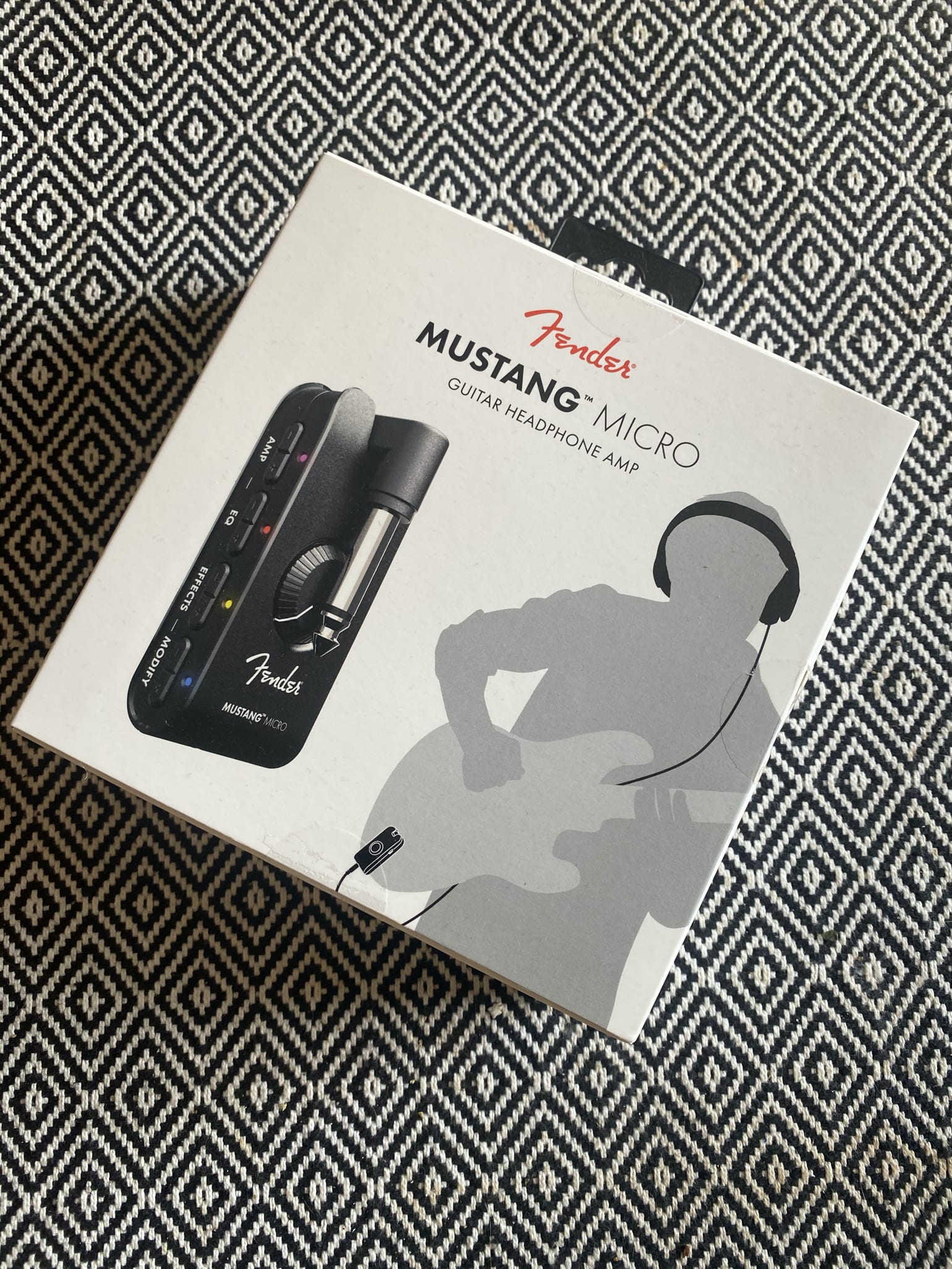 Plug in and go

The whole ‘plug in and go’ idea appeals to me a lot. I just want to play my guitar! I hate having to work out how to get apps on smartphones to recognise interfaces, deal with latency and endless menus. I can do tech till I’m blue in the face, I really can. But when I’m trying to work out a new song I want to be unencumbered by all the hassle. For me, that’s a huge plus point for the Mustang Micro. It’s one I appreciated again and again whilst using it. 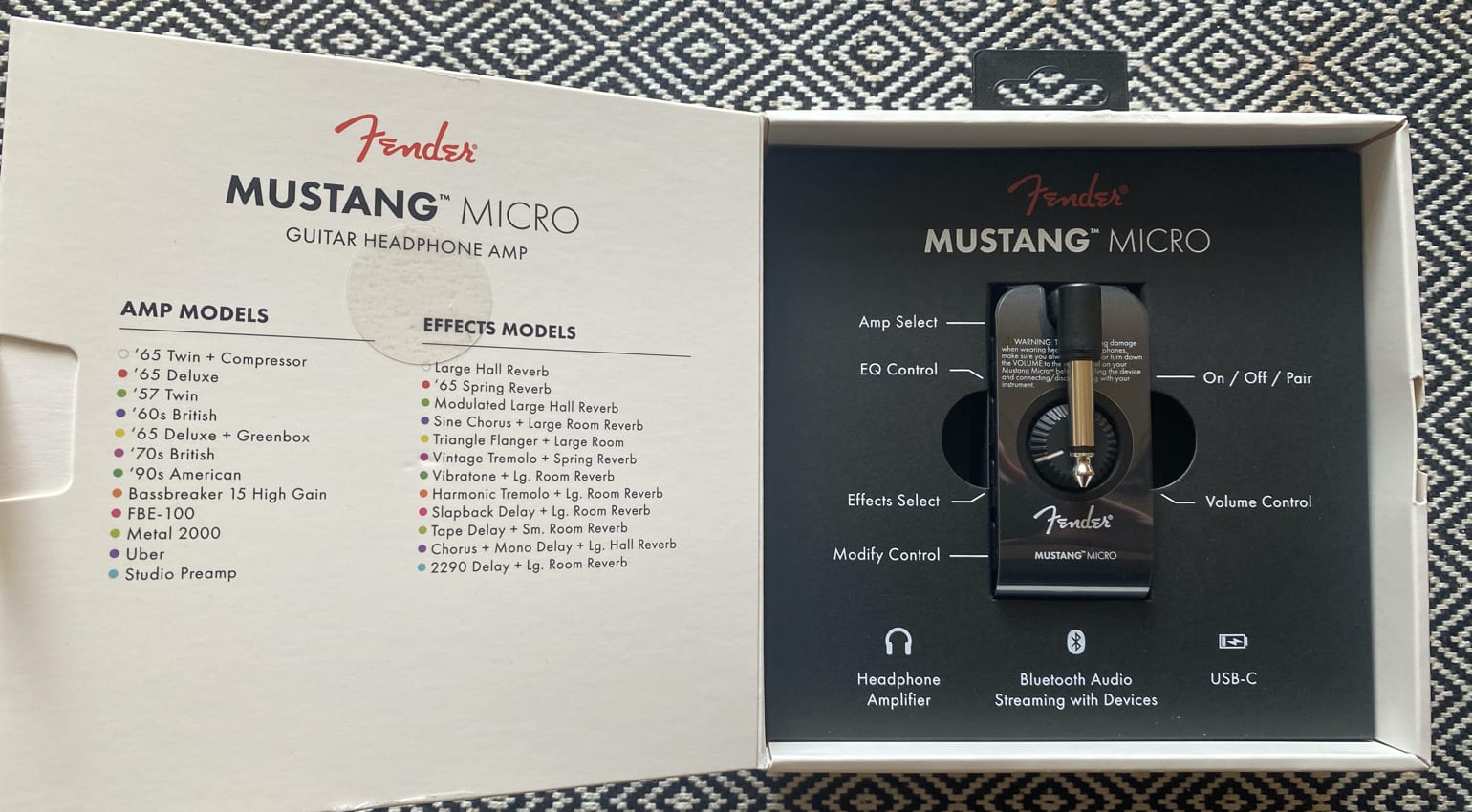 The big volume dial on the front of the unit is easy to grip and allows you to dial in the output to taste. Then it’s time to start pushing some buttons! The four controls on the side allow you to choose amp models, adjust the EQ with 5 different settings, choose an effect and finally adjust that effect in a similar manner to the EQ. The package comes with a little card to tell you what LED colour light represents which amp or effect, but to be honest I just followed my ears and it all turned out fine.

The Mustang Micro has 12 amp models, along with 12 effect combinations. The amps cover models inspired by (of course) classic Fender amps, but some tones in the style of Marshall, Bogner, Mesa and EVH amps are available, too. The Fender amp models include a ’65 Twin Reverb, ’57 Twin and a ’65 Deluxe Reverb and I found them, fun to play through.

The effects include some great reverbs, modulations and stereo delays, all well chosen to cover a lot of musical styles. You’re getting Hall and Spring reverbs, various modulation effects including chorus, harmonic tremolo, vibrato and flanger combined with reverb, plus tape, slapback and a stereo 2290 delay with reverb. Fender have prioritised simplicity of use, which is a massive win. I was happy just to set the overall volume and tweak as I played. Another huge bonus is that even whilst using single-coil pickups and P90s paired with heavy gain sound, the Mustang Micro was nice and quiet, with no hiss or fuss. 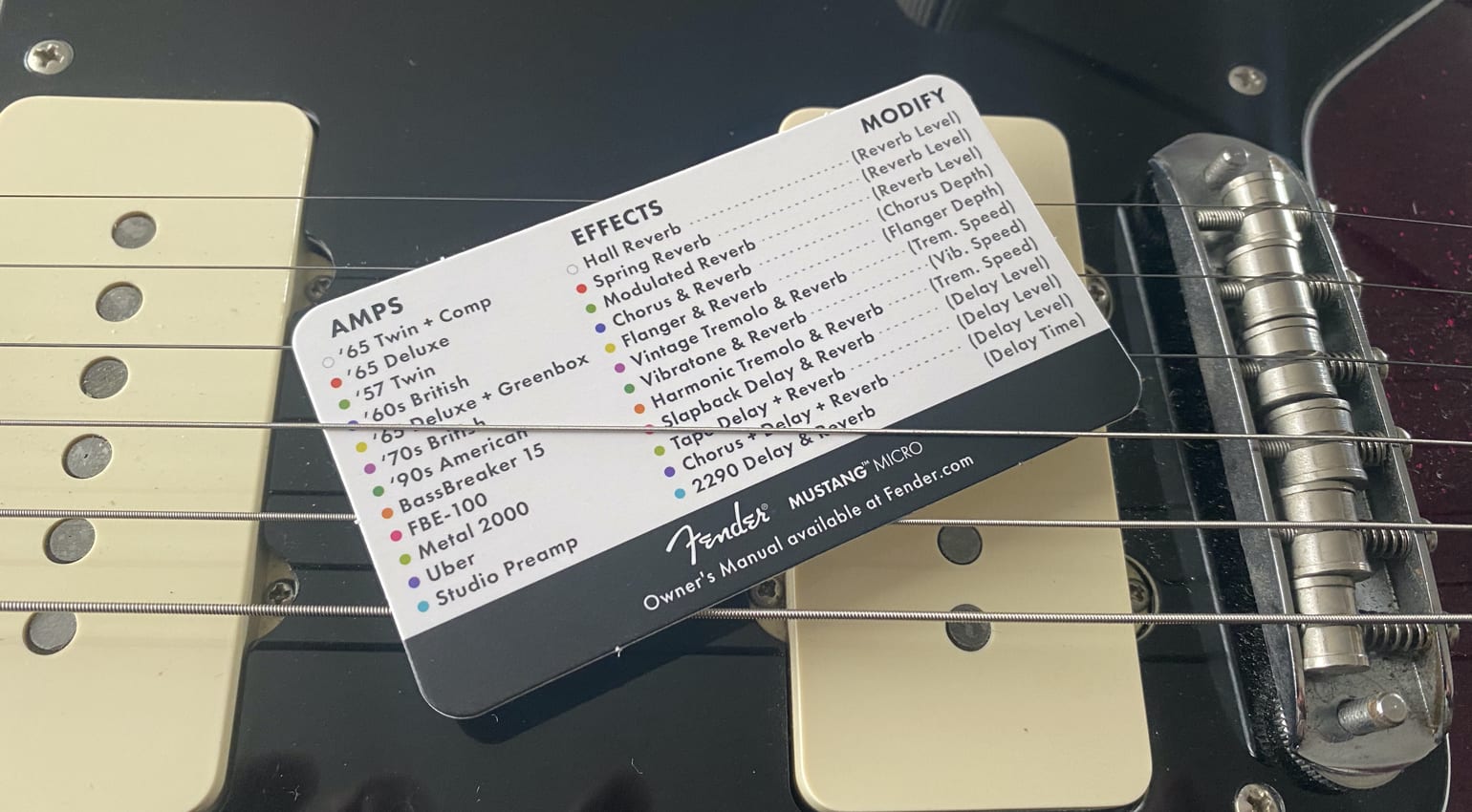 In the ’90s I had a silver Korg Pandora headphone amp – that thing buzzed and hissed in my ear for years! The Mustang Micro, in contrast, was a welcome and present surprise. I’ve owned loads of headphone amps, from the ancient H&K Cream Machine and RockMan units in the 80s, all the way through to smartphone-enabled apps using interface adapters. The Mustang Micro is way more user friendly than any of those.

Hands up: who hates headphone and guitar cables hanging around as you play? They always seem to be getting in my way. The Mustang Micro avoids a lot of this, as it goes straight into the output socket. No need for a guitar cable! I found it worked fine on many different guitars, with no issues. And because it plugs straight into your guitar, you can easily push your headphone cable behind you when you are playing, so it doesn’t interfere with your picking hand.

There’s a bit of wireless connectivity, too, with Bluetooth to let you stream audio from a device so you can play along to your favourite songs and backing tracks. I found this super easy to get up and running with my band demos streaming from my iPhone to the Micro Mustang. Within minutes I was jamming out some new solo ideas. It also has built-in audio/video sync, so latency wasn’t a problem either. 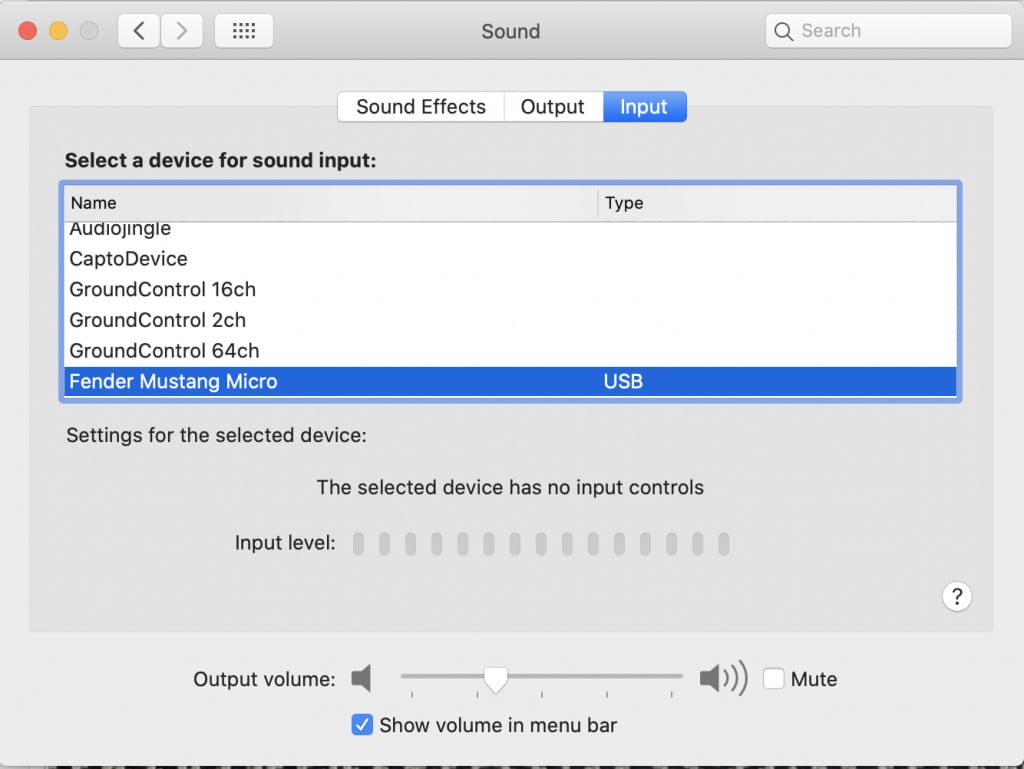 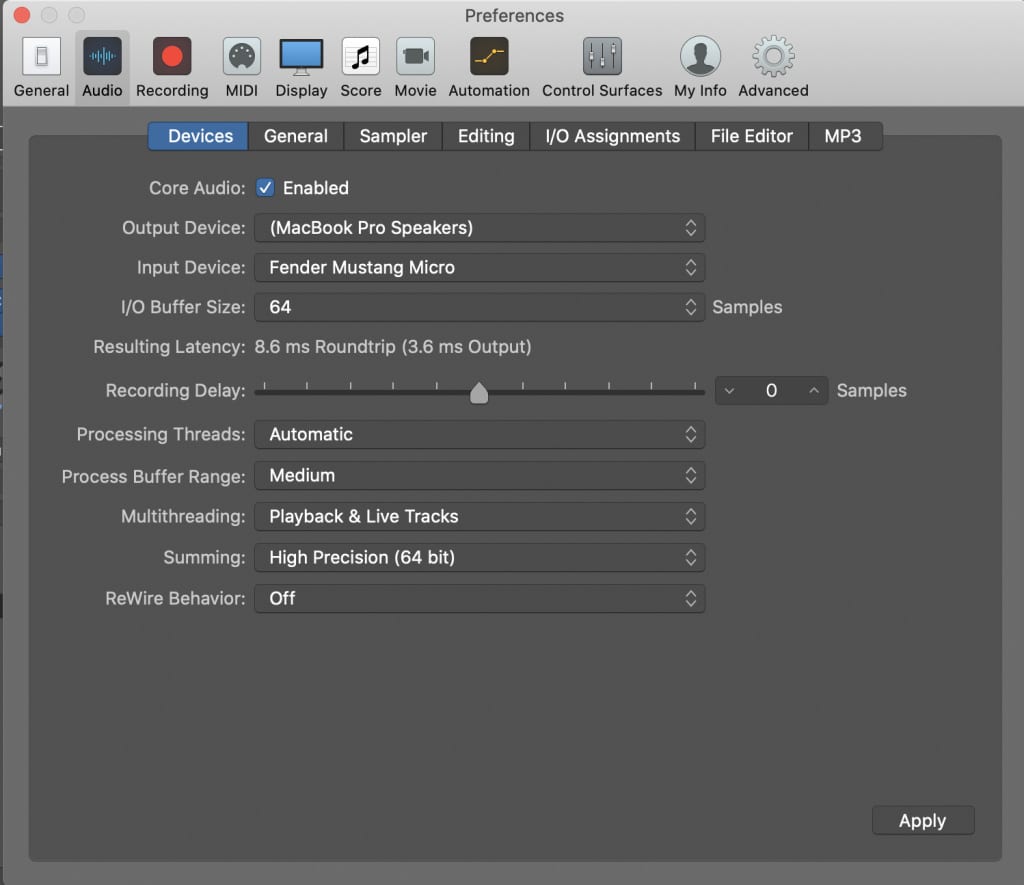 The on-board USB port turns it into a recording interface, so it’s it super useful for musicians on the move. I was up and running on my Mac in Logic Pro X within seconds of plugging in the Mustang Micro. It ran hassle-free with super low latency.

If you are in the market for a good quality practise companion for your gig bag, then the Fender Mustang Micro has you covered. On paper, I would probably have passed the Fender Mustang Micro by. But having spent some time getting familiar with it, I would go out and buy one in a heartbeat. I really loved the simplicity and the excellent sound quality. Overall, I could see myself using one every day. A thumbs up from me, all round! 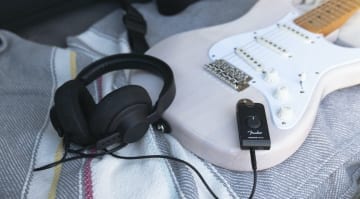 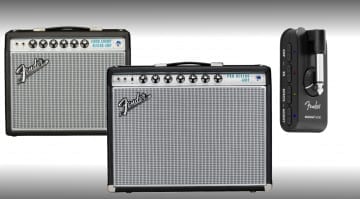