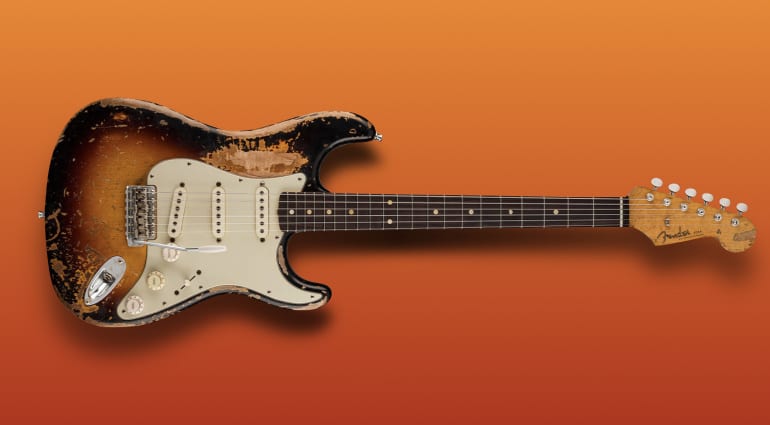 The Fender Mike McCready Custom Shop Stratocaster was one of the big reveals at NAMM back in January this year. The guitar has an interesting story. The Pearl Jam guitarist originally thought it was a 1959 Strat, but it turned out to be a 1960 model instead.

This instantly recognisable battered old Fender Stratocaster is the latest signature model from the Fender Custom Shop and is based on the guitar used by Mike McCready of Pearl Jam, and this Custom Shop Stratocaster has some stories to tell.

Mike McCready was always under the impression his guitar was an original ’59 Stratocaster. But when Fender Custom Shop’s Vincent Van Trigt disassembled the guitar to ascertain how to recreate it for a special run, he revealed the guitar’s date of origin to actually be 1960 instead. No biggie, its still an older pre-CBS Stratocaster that also happens to belong to a very famous guitarist, so it was worth all the effort and has now been recreated in the minutest detail.

This ol’ Strat has seen things in its lifetime, and McCready has put a few dinks and scrapes on the guitar whilst touring and playing it with pearl Jam. It has a sunburst lacquer over a two-piece alder body, with a flat-sawn 1960 Oval C profile maple neck with a 21-fret rosewood fingerboard, with the correct vintage-specification frets. The finish has been heavily aged and relic’d to make it looks like a carbon copy of the original guitar. This may or may not be your thing, but at least it is based on an actual guitar and not ‘fantasy land’, template ageing which we often see coming out of the Custom Shop.

Other hardware includes a vintage-style Fender synchronized vibrato with a Callaham block, plus a bone nut and vintage Kluson-style tuners, which is all in keeping with a guitar of this era.

It has three custom-wound Josefina pickups, which is Fender’s top-end for pickup winding these days. These should be as close as you can get to the original ’60s wound single-coil units. The pickups are then wired up via a five-way switch and have controls for volume, tone and treble bleed.

The guitar ships in a deluxe hardshell case, with a strap, certificate of authenticity and ‘McCready Case Candy Kit.’ Which, for this price had better be good, as this ol’ Strat isn’t exactly cheap! The guitars will be available with dealers from 21 April. So if you want one, get your orders in now, as it is a limited edition. 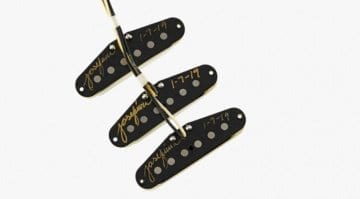