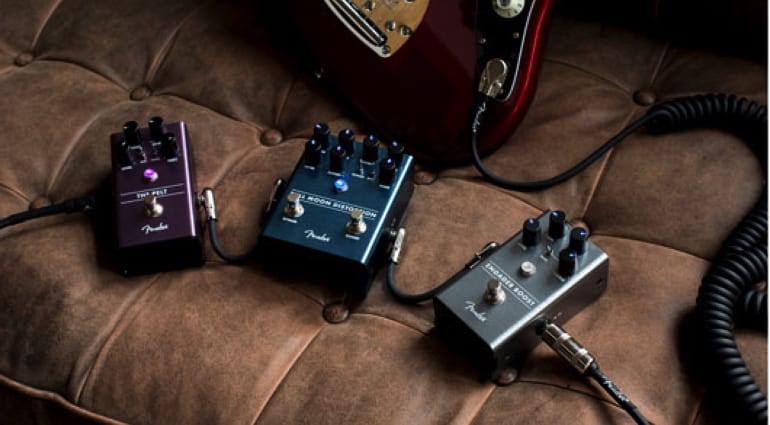 Fender has expanded on its recently rejuvenated line-up of effect pedals, adding three new circuits. These units were announced during Summer NAMM and are now all ready for release.

The new Engager Boost, Pelt Fuzz and Full Moon Distortion pedals all look like they could be good companions for the existing Fender effect range. Stan Cotey is the brains behind all three circuits. With his proven track record for making great amps and effects, we had high hopes when they were first announced. It looks and sounds like they have come up with the goods. Fender has now released official demo videos of all three units at last. You should see them in stores very soon.

With an integrated 3-band EQ, a switch to select the centre frequency for the middle control and up to 20 dB of boost on tap, the Engager Boost looks like a handy pedal for live work. In addition, there is a FET input buffer which Fender reckons will help when it is attached to the front end of your valve amp.

The Pelt Fuzz has controls for Level, Fuzz and Tone including a Bloom control to change the sound’s ‘contour’. There is a Thick switch to help fatten the sound and a useful mid-toggle switch, letting you boost or cut the middle frequencies.

The Full Moon Distortion is designed for a more high gain, distortion-like tone. There’s a 3-band EQ, a high-treble filter and some decent sound shaping options. This pedal continues where its Pugilist Distortion stops. Possibly perfect for lovers of brutal riffs?